The world’s largest memory manufacturer Samsung today has announced that it will be mass producing the world’s first ever TSV, or Through Silicon Via 128GB memory modules. However, as much as memory buffs and enthusiasts would probably be at the edge of their seats right now, you probably will not be able to purchase these memory modules yet. 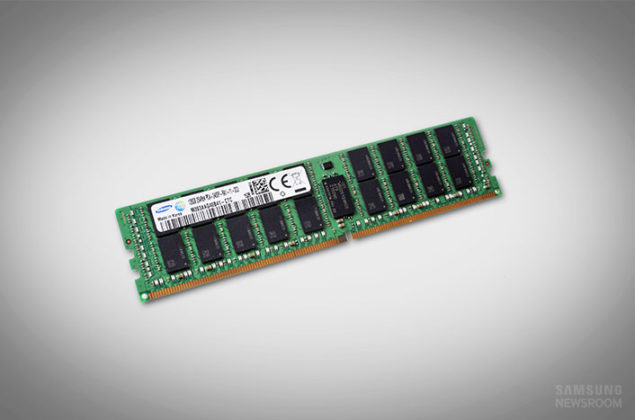 After the company’s introduced the world-first 3D TSV DDR4 64GB that was showcased last year, the company’s new TSV registered dual inline memory module are going to target the enterprise level of the market first. Server rooms consume massive amounts of power and the high capacity and better efficiency of the 128GB DDR4 RAM modules will allow server computers to accommodate more amount of RAM without using up additional DIMM slots.

Joo Sun Choi, who is the Executive Vice President of Samsung’s Memory Sales and Marketing speaks how the company has made a breakthrough in the memory market:

“We are pleased that volume production of our high speed, low-power 128GB TSV DRAM module will enable our global IT customers and partners to launch a new generation of enterprise solutions with dramatically improved efficiency and scalability for their investment. We will continue to expand our technical cooperation with global leaders in servers, consumer electronics and emerging markets, where consumers can benefit from innovative technology that enhances their productivity and the overall user experience.”

Coming to the technical side of things, each 128GB TSV DDR4 RAM module packs a total of 144 DDR4 chips that are arranged into 36 4GB DRAM packages. The manufacturing process of these memory chips are 20nm, which would explain their high energy efficiency. As for speed, Samsung’s 128GB TSV DDR4 RAM modules will provide sufficient memory to next generation server machines and will deliver speeds up to 2,400 Mbps (300MB/s).

Samsung’s competitor in this particular market is none other than Micron and SK Hynix. Micron had earlier stated that it was going to match the market share of Samsung by investing heavily in 16nm chip facilities, but so far, it appears that the South Korean’s dominance remains unthreatened. After there has been a high adoption rate of DDR4 RAM modules in the enterprise market, Samsung will most definitely target the enthusiast crowd.