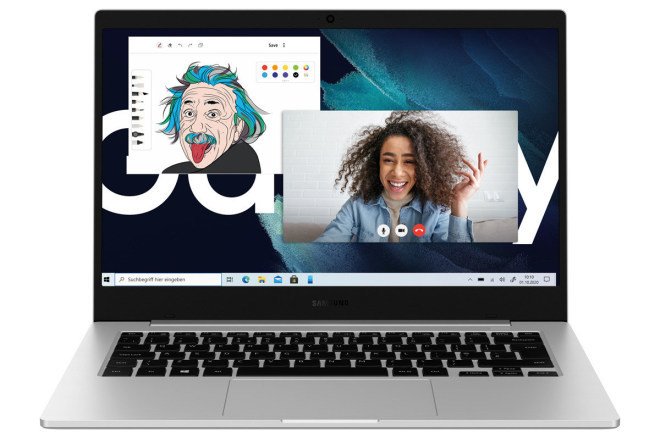 Samsung unveiled the Galaxy Book Pro series along with a few more devices in the lineup yesterday. However, for some reason, the South Korean tech giant missed out on the Galaxy Book Go, a device that does exist in the portfolio but was not revealed. The Galaxy Book Go serves as one of the cheapest Windows 10 based ARM laptops. A simple, inexpensive laptop with LTE connectivity along with a Snapdragon SoC from Qualcomm. According to a tip, the device will launch for 449 euros or approximately $543 or $349 without LTE.

We are still not sure why Samsung did not reveal the Galaxy Book Go at the event yesterday, but our friends over WinFuture have been generous with the leak along with some fresh renders and specs.

Galaxy Book Go is one of the few laptops with ARM processors ins a lower price tag. This LTE-capable laptop is built for the mass market, but there will be some compromises, of course.

With the notebook, you are getting a 14-inch IPS display that offers full HD resolution. You can look at some of the press renders below.

The Galaxy Book Go brings a Snapdragon 7c under the hood for the low price, sporting 8 cores clocked at 2.5 GHz, 4 gigs of RAM, and 128 gigs of internal flash storage that can be expanded with a microSD card should you want that.

The leak also suggests another variant of the Galaxy Book Go that ships with the Snapdragon 8cx Gen3 but is not sure if it will be launched globally but will have 5G support.

The rest of the specs are standard, ranging from a 42.3 watt-hour battery with 25-watt USB-type-C charging support: Bluetooth 5.1, ac-WLAN, Miracast, one Type-C, and one Type-A USB ports. The Galaxy Book Go will run the ARM edition of Windows 10. The power button also doubles up as a fingerprint reader for added security.

The notebook is also certified according to the U.S. military standard 810G, which allows the laptop to be dropped from heights of up to 1.20 meters, and offers a hinge that can be folded out up to 180 degrees. You are also getting protection against dust, which means that there is no fan under the hood.