Samsung Focus S and Flash Officially Up for Sale

Going to purchase a new phone and excited to get a windows phone? Well before making any decision you should know that there are some new additions. Samsung just updated their Windows Phone line and Samsung Focus Flash and Samsung Focus S are now available officially in US by AT&T with economical plans. 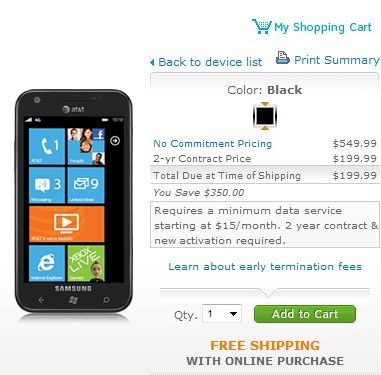 The new Samsung Focus S is only available in 16GB version according to the specifications listed on the website. Focus S is a Windows Phone equipped with a 4.3” Super AMOLED Plus screen. It has a 1.4Ghz single core processor and 1GB of RAM along with HSPA+ data speeds. It has a majestic 8-megapixel rear camera, front facing camera, gyroscope sensor and is only 8.5 mm thick.

The Samsung Focus Flash too exhibits a Super AMOLED screen but this one’s only 3.7 inches. It has a 1.4GHz single core processor and 1GB of RAM with HSPA+ data speeds. It has a rear 5-megapixe camera and a front facing camera. The maximum capacity is 8GB and it will be released as Omnia W in various countries.

The two additions to the Windows Phone smartphone lineup looks amazing as they’ve got much to offer. Let’s see if Samsung can match HTC Titan and Radar with their ‘newbies’ or will it be Nokia Lumia phones gaining the ground this time?