Crytek, a German-based video game developer that is responsible for some of the most visually impress games such as Crysis 3, has been in discussions for past few months due to the financial crisis that it has been facing, but yesterday, the developer pulled almost every single major gaming website towards itself by announcing a PC version of its critically acclaimed Xbox One exclusive launch title called Ryse: Son of Rome, and just recently, the developer also proclaimed that they are not "100 per cent happy with Xbox One sales right now," and that Ryse 2, a sequel to the original game, could also possibly happen on Sony's PlayStation 4 console. 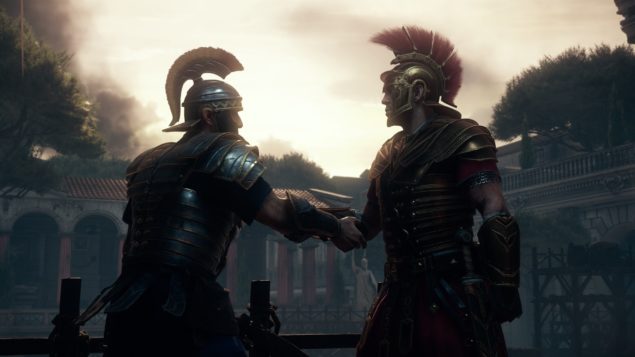 Despite the fact that Microsoft published, and partially funded Crytek for developing Ryse: Son of Rome as a launch title only for its latest Xbox One console, the game is now coming to PC this fall with all the previously released downloadable content. Following this announcement, Cevat Yerli, the CEO and co-founder of Crytek, talked to Eurogamer in an interview and explained, in detail, the whole stuff going on at the troubled studio, the entire interview is worth a read, but right now, you might be interested in knowing what Yerli thinks about the Xbox One and future of Ryse.

Talking specifically about Ryse: Son of Some on Microsoft's latest Xbox One console, Yerli stated that the studio is not much happy with the current Xbox One sales, but that doesn't mean the developer has fallen out over the prospect of developing a sequel to the game with Microsoft, as he also stated that the studio maintains good relationship, and constantly looks forward to work with the American platform holder. However, Crytek clearly has no plans to sell off Ryse IP. Yerli said:

"[We] have a good relationship with Microsoft. We are constantly looking at what we can do together. We are not 100 per cent happy with Xbox One sales right now. So we want to wait till the current gen and next gen catches up."

Further talking about Ryse 2, Yerli hinted that we could see a sequel to the original game on Sony's PlayStation 4 console by pointing out the fact that Crytek is the only rightful owner of Ryse IP, so they have the right to do whatever they want to do with the brand. Yerli clearly stated that there is a lot of positive feedback for a sequel to the Roman epic, so they are considering Ryse 2. He said:

"Ryse was maybe not the best rated game, but what we achieved for launch was a great foundation for us to build up. I know there are a lot of gamers who are contacting me through different channels who want to see Ryse 2. There is a lot of positive feedback. We’re considering it. But at this point there is nothing official I can talk about."

Ryse: Son of Rome will be coming to PC this fall with full 4K resolution support. Check out the game's PC vs Xbox One screenshot comparison here.