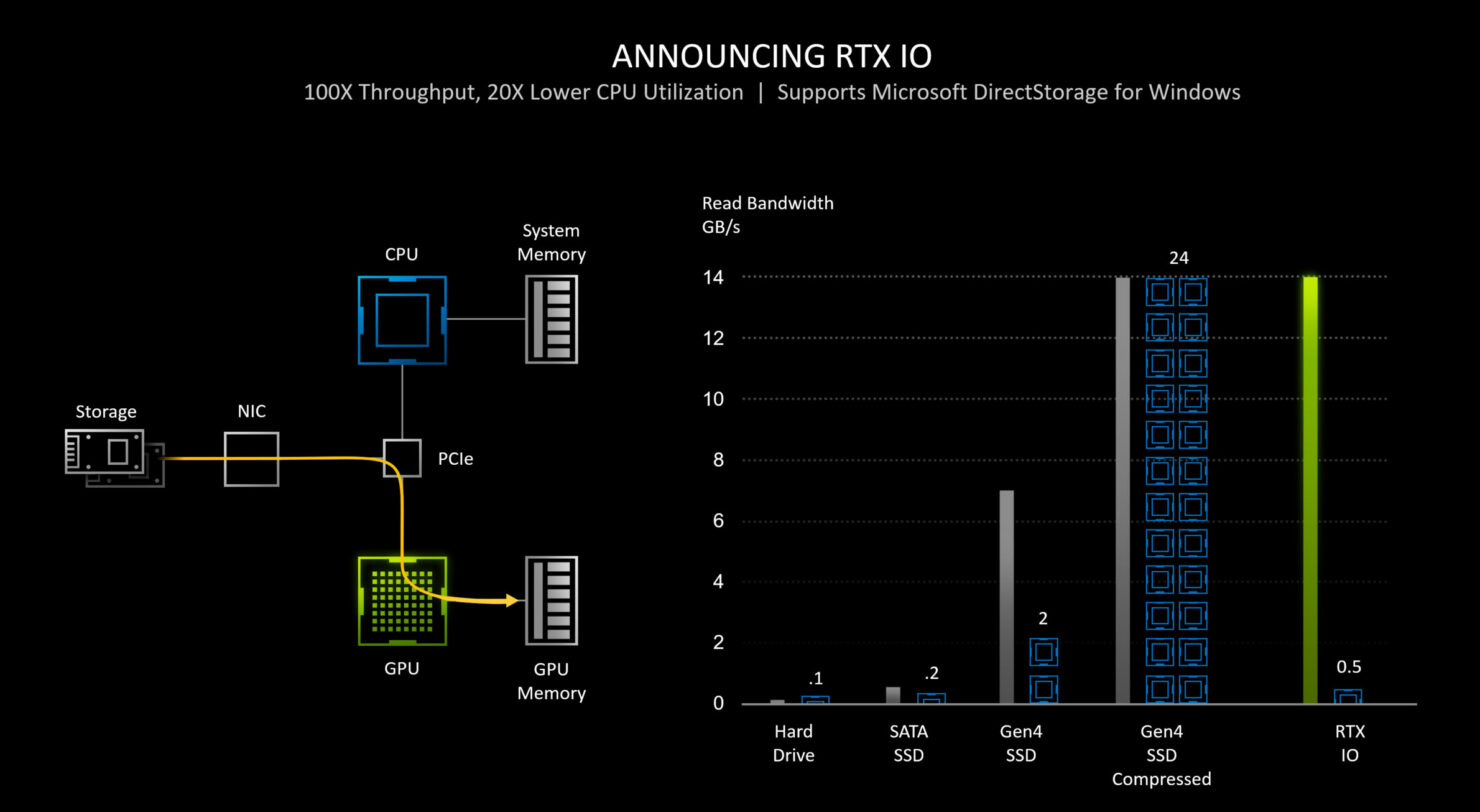 Among the many announcements made yesterday, NVIDIA also announced RTX IO, described as a 'suite of technologies' aiming to deliver GPU-based loading and decompression of game assets, which the company claims can speed up I/O performance by a hundred times compared to standard hard drives and storage APIs.

The RTX IO suite will work in tandem with Microsoft's new DirectStorage API, which was conceived for the upcoming Xbox Series X console but is also coming to PC.

Here's what Bryan Langley, Group Program Manager for Windows Graphics and Gaming, said on the partnership:

Microsoft is delighted to partner with NVIDIA to bring the benefits of next-generation I/O to Windows gamers. DirectStorage for Windows will let games leverage NVIDIA’s cutting-edge RTX IO and provide game developers with a highly efficient and standard way to get the best possible performance from the GPU and I/O system. With DirectStorage, game sizes are minimized, load times reduced, and virtual worlds are free to become more expansive and detailed, with smooth & seamless streaming.

RTX IO will allow reads through DirectStorage to remain compressed while they're being fed to the GeForce RTX GPU for decompression, which means the data will be moved in a very efficient way. Using the GPU for the decompression process through RTX IO also saves valuable CPU cores that would otherwise have to be busy with that work.

Microsoft also published a blog post on DirectStorage yesterday, explaining that the technology will only support NVMe SSDs.

This API is the response to an evolving storage and IO landscape in PC gaming. DirectStorage will be supported on certain systems with NVMe drives and work to bring your gaming experience to the next level.

In a world where a game knows it needs to load and decompress thousands of blocks for the next frame, the one-at-a-time model results in loss of efficiency at various points in the data block’s journey. The DirectStorage API is architected in a way that takes all this into account and maximizes performance throughout the entire pipeline from NVMe drive all the way to the GPU.

It does this in several ways: by reducing per-request NVMe overhead, enabling batched many-at-a-time parallel IO requests which can be efficiently fed to the GPU, and giving games finer grain control over when they get notified of IO request completion instead of having to react to every tiny IO completion.

It sounds like both Microsoft and NVIDIA are working to address what Tim Sweeney called out when he said the PlayStation 5's storage architecture was way ahead of the standard one in place for PC games. That's great news, but there is a catch: Microsoft is 'targeting' a release for the DirectStorage API at some point next year in the hands of developers, and that's only as a preview. In all likelihood, we'll have to wait until 2022 before we see some games actually taking advantage of both RTX IO and DirectStorage.