Google Nexus 4 is one of the great Android phones that managed to conquer a huge fan base since it debut. And like every other Android device, their phone already have some developer love kicking in. Starting from the manual rooting methods to one click easy desktop rooting utilities; there are many method to root your Google Nexus 4. Like other Nexus devices, the Google Nexus 4 also comes with an easily unlockable bootloader that guarantees root and the ability to flash custom recoveries and firmware.

MSKip, senior XDA moderator and recognized Android developer, has released a Nexus 4 Toolkit that will do an array of stuff to get your phone in free state. This toolkit can install correct ADB / Fastboot drivers, lock and unlock Nexus 4 bootloaders, perform a single click rooting, perform complete Nandroid backup  etc. In short, this Nexus 4 single click root toolkit is the answer to all those who don’t like mingling with ADB and other manual hassled while trying to get root on their Google Nexus 4. 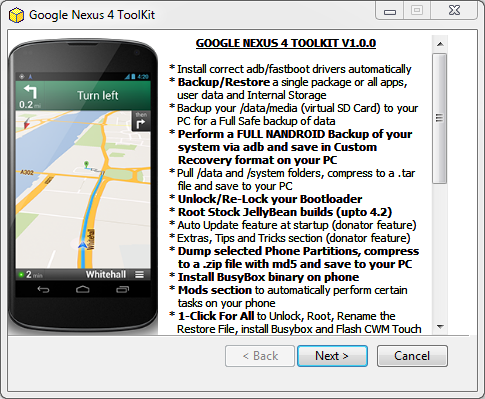 Interestingly, there are two versions of this Nexus 4 toolkit. The free version carries all the functionalities that are stated above and the donate version adding the capability to check for tool’s new version via an update function.

But like always, beyond this point you understand the risks involved in root your phone and you must be ready to take complete responsibility if anything goes wrong during the process. 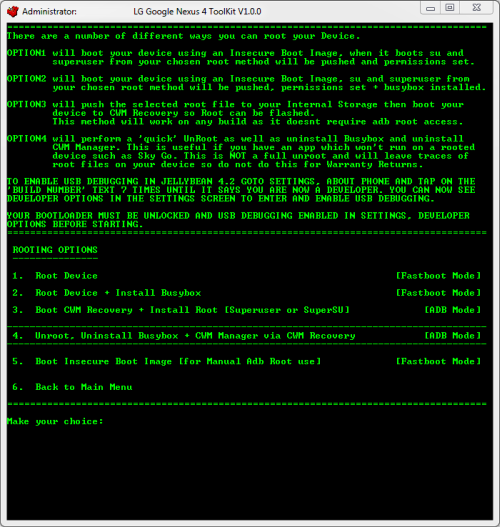 It is important to mention here that the developer of this program is already carrying our extensive research and development in order to make this toolkit bug free. So it is quite possible that this kit might not work at all for you or work partially. Another XDA developer, Cyr0s, has released n4Root single click rooting utility for Nexus 4 as well and you can check that out here if the toolkit is giving you any trouble.

We believe that with these easier methods, you will get your Nexus 4 rooted and unlocked with ease and without getting into much glitches. However, as the development for Nexus 4 has just kicked off, so we believe that there will be more reliable and easier method surfacing in near future.