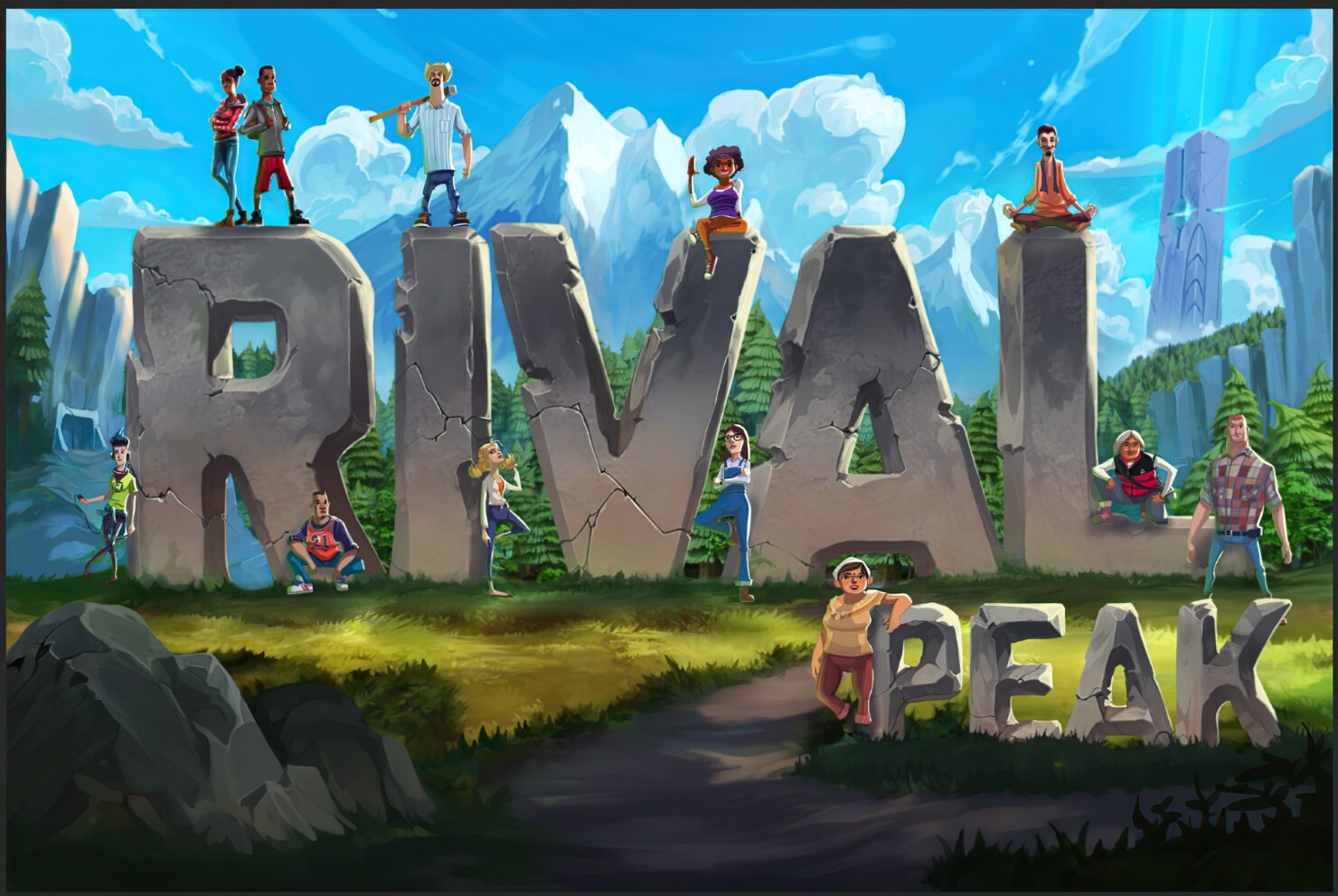 After experiments such as Netflix's interactive shows, of which Black Mirror: Bandersnatch is arguably the most famous example, there's a new project called Rival Peak that's exploring a different side of the intersection between games and television.

Described by its makers as a 'Massive Interactive Live Experience', Rival Peak is a reality show that started airing on Facebook earlier this month where viewers can choose to interact in various ways, chiefly picking who will get eliminated.

So far, it probably sounds familiar. Only this is all created by the Unity engine and features AI contestants, not actual persons. Those are running on a persistent simulation developed by Pipeworks Studios, an Oregon-based game developer that was acquired earlier this year by Sumo Digital.

Each of the twelve contestants has its own interactive live stream feed, running 24/7. Rival Peak even comes with an integrated VOD show, 'Rival Speak', hosted by actor and producer Wil Wheaton every Wednesday on Facebook Watch. And the whole project (with a budget of 'eight figures', so around ten million or more US dollars) was designed and completed in just about six months, an impressive timeframe to be sure.

We spoke with Stephan Bugaj and Dmitri Johnson, Creative Director and CEO at DJ2 Entertainment, to discover more about how this interesting project came to be. First of all, as far as the backstory of Rival Peak goes, we learned that it mixes elements from 'Survivor' and 'Lost', with the mystery themes inspired by the latter show supposedly becoming more prevalent as the season goes on and the characters uncover more about the ancient monuments and modern installations that surround them in this mountain located somewhere in the Pacific Northwest. Of course, given the nature of this hybrid narrative experience, Bugaj and his fellow creatives had to create the framework of a story that would have to take into account how character eliminations are completely out of their hands - not an easy feat. They also came up with some 'clever tricks' in order to efficiently preserve dialogues (of which over 160,000 words have been created for the show) even when a certain character has been eliminated. 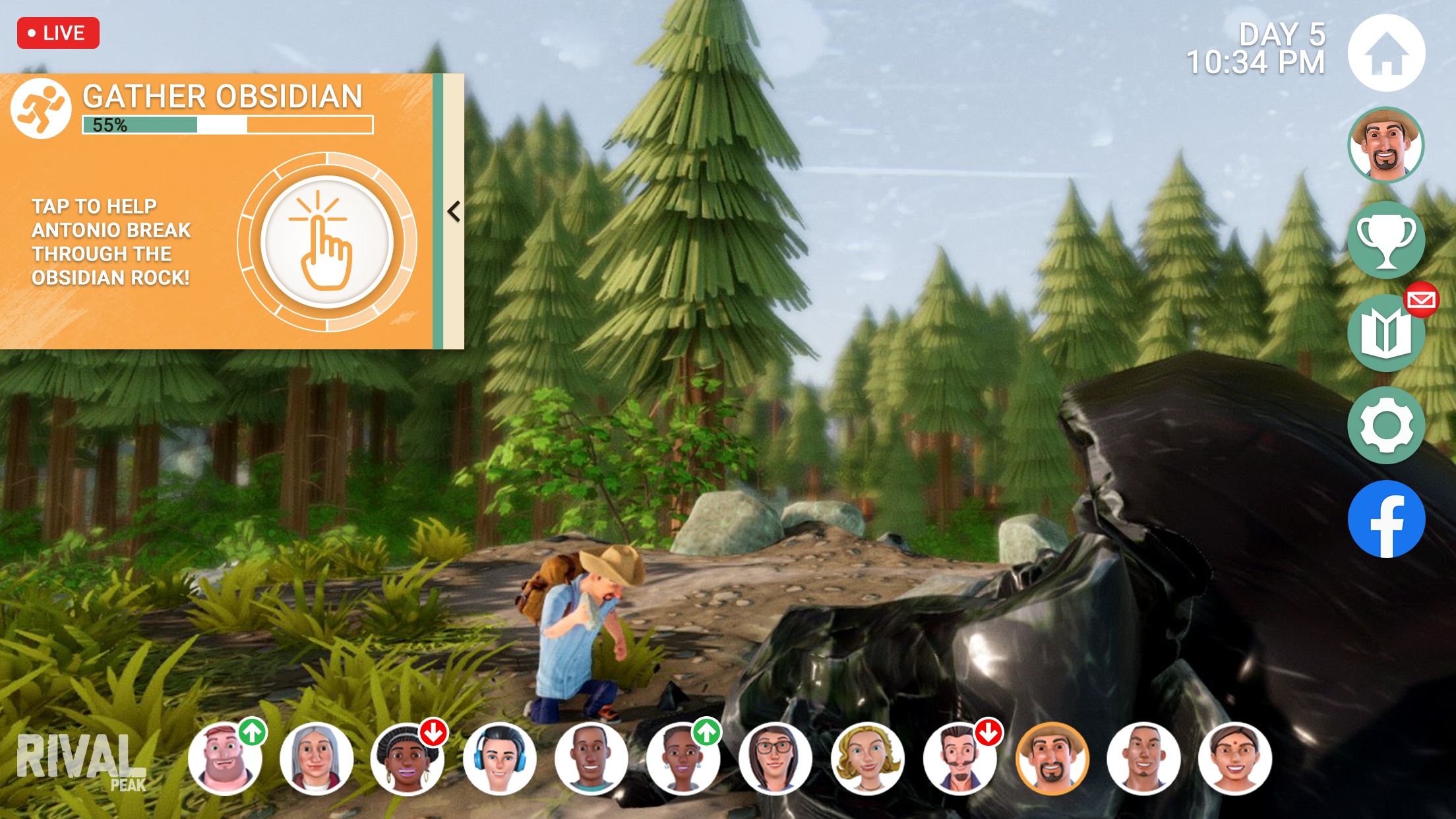 As mentioned earlier, there's a high level of interactivity built into the very fabric of the project, and that's powered by the Genvid technology we previously covered on Wccftech. Bugaj stated:

The Genvid tech is, we think, best in class and the most efficient and stable version of this kind of large multiplayer interactivity. And it's been great. It's held up really well so far.

You’ll be tempted to call it a ‘game’, but it’s definitely not. It’s a lot more. And that's exactly why we got involved -- we like to always be on the cutting edge of entertainment.

Stephan Bugaj worked on the script of several Telltale games, such as Tales from the Borderlands, The Walking Dead Season Two, and The Wolf Among Us, so we asked him whether he saw what's in Rival Peak as an evolution of Crowd Play.

I think the experiments with Crowd Play at Telltale were more along the lines of looking at crowd based dialogue tree manipulation, so you'd be voting on dialogue choices. What we're doing with Rival Peak instead is the dialogue is on rails, and then what the players are interacting with is more the physical evolution of what these characters are doing. Then that, in turn, influences the dialogue. You're not directly voting on who's going to say what, you're influencing the characters as they sort of pass through the world, and then that influences the story. 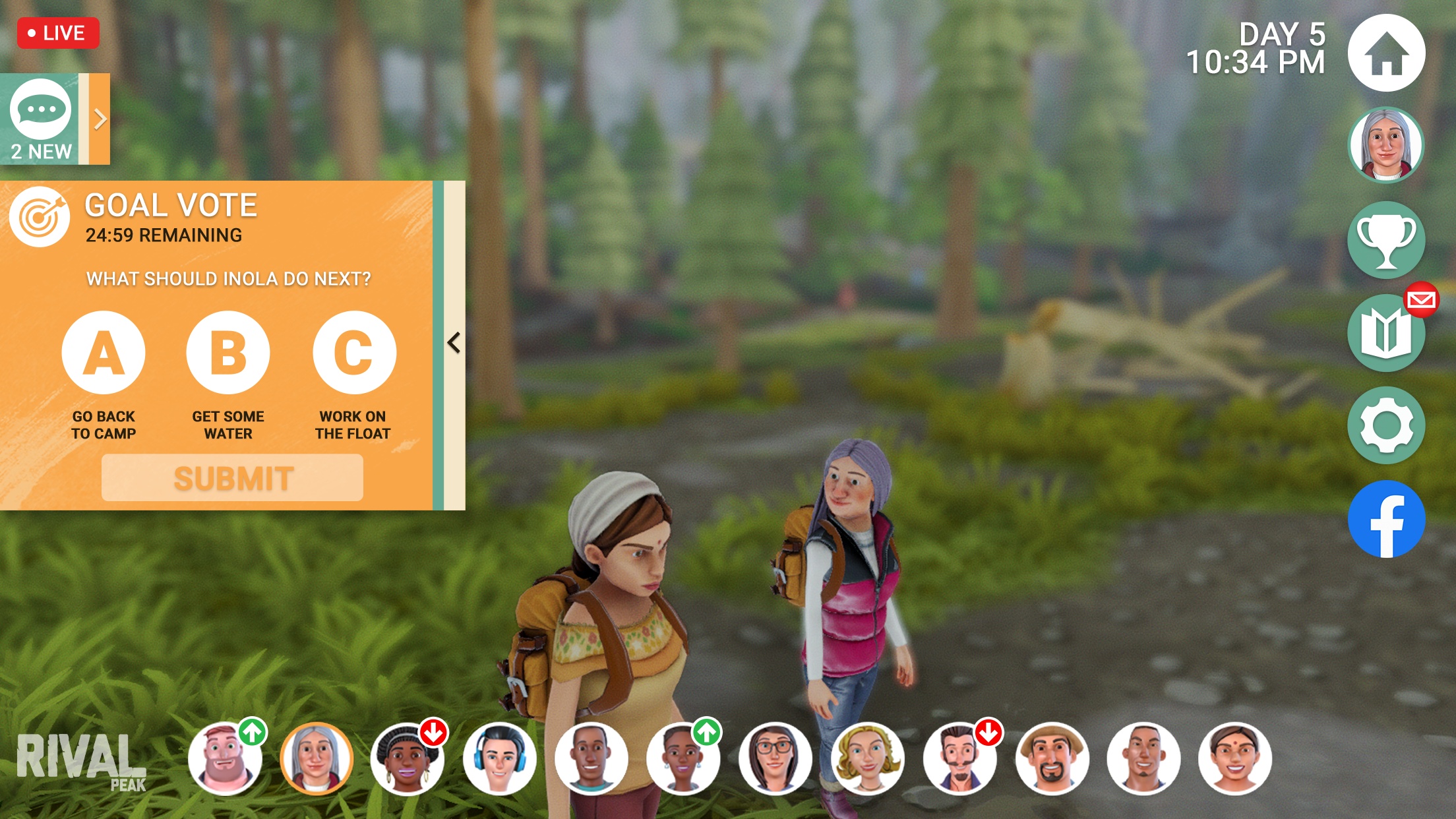 As to why Rival Peak is on Facebook Watch rather than other streaming platforms, Bugaj said:

Facebook is the ideal partner for a few reasons, one of which was that they were willing to take new and interesting like this. And it was great, having that support where they were excited about something new and really wanted something different. Rival Peak is also something that would exercise different parts of their platform, Facebook Instant Game, Facebook Watch, the social media platform, and brings that all together. And then the other thing is, it's a large platform with a lot of players all around the world. The fact that it's global was great for us, too, because Facebook allows you to get a pretty global reach very quickly. Gaming and entertainment are global now. What was also exciting for us was the fact that it would be immediately worldwide.

To that end, it seems like viewers are mostly flocking to support the contestants that come from their same country, a bit like they would when watching sports events like the Olympics, even if they are just virtual participants.

Overall, Rival Peak has had a promising early reception so far, with over a million views registered on the second VOD show episode. The third one will air later today on Facebook Watch, starting at 6 PM PST/9 PM EST. Johnson and Bugaj (who are also producing live-action TV shows and movies based on game IPs like Sleeping Dogs, Vampyr, Little Nightmares, We Happy Few, Life is Strange, Echo, Ruiner, and Disco Elysium) said there are plans for future seasons of Rival Peak, with the framework for a five-season story arc already in place.