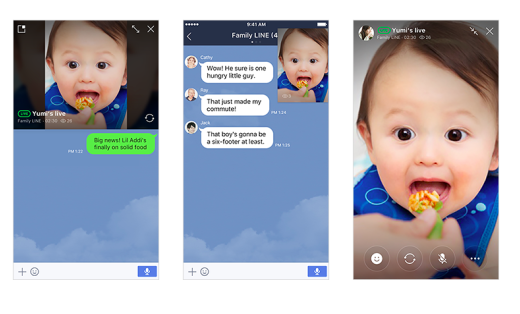 Gone are the days when messaging apps were limited to just texting or sharing media. With the advent of features like video-calling and audio-calling, these apps have become a home to all the functionalities that we require for communication in any virtual form. Taking things to another level, the instant messaging app, Line has added a livestreaming feature dubbed Chat Live for group chats.

The new feature comes as a part of the latest update of Line. The company suggests that the new live video feature can be used for livestreaming events or chat with friends in a group. It's worth noting that Line's group chat supports up to 200 users, which means livestreaming in a group could cater to a wide audience. This could be something that may appeal to businesses as they can livestream their new product in a group.

The company says that the livestreaming feature is to provide an “increasingly rich communications experience” to the users. In Q2, Line was reported to have a total of 169 million monthly active users, with its biggest user base in Japan. In December, last year, the company added group video calls with live reaction effects.

Ability to change the size of livestream screen

To start livestreaming in a group, Line users need to the tap on the ‘telephone’ icon and then on the ‘Live’ button. Interestingly, users can also adjust the size of the livestream screen, from full screen to 1/8 and more sizes. Similar to Facebook Live, group members can also comment during the livestream in real-time.

Effects and Filters for in-app camera

Other than the new "Chat Live" feature, the latest update for the messaging service also brings camera effects from Line's camera apps like B612 and Foodie. Around 50 effects and 7 filters are now available in Line’s in-chat camera. The company touts that it will be adding more effects and filters in the future. “Users will be able to use filters and effects to touch up their complexion and have fun manipulating their pictures and videos from within the chat, all without opening another camera app,” it says.

Playing videos within the app

Lastly, the new update also adds the ability to minimise video or YouTube player from within the app. Line asserts that this new feature would allow users to “enjoy videos while chatting”. It is yet to be confirmed whether this feature is available for the Android version of the app.

Youtube Live to Take on Twitch – To be Announced at E3