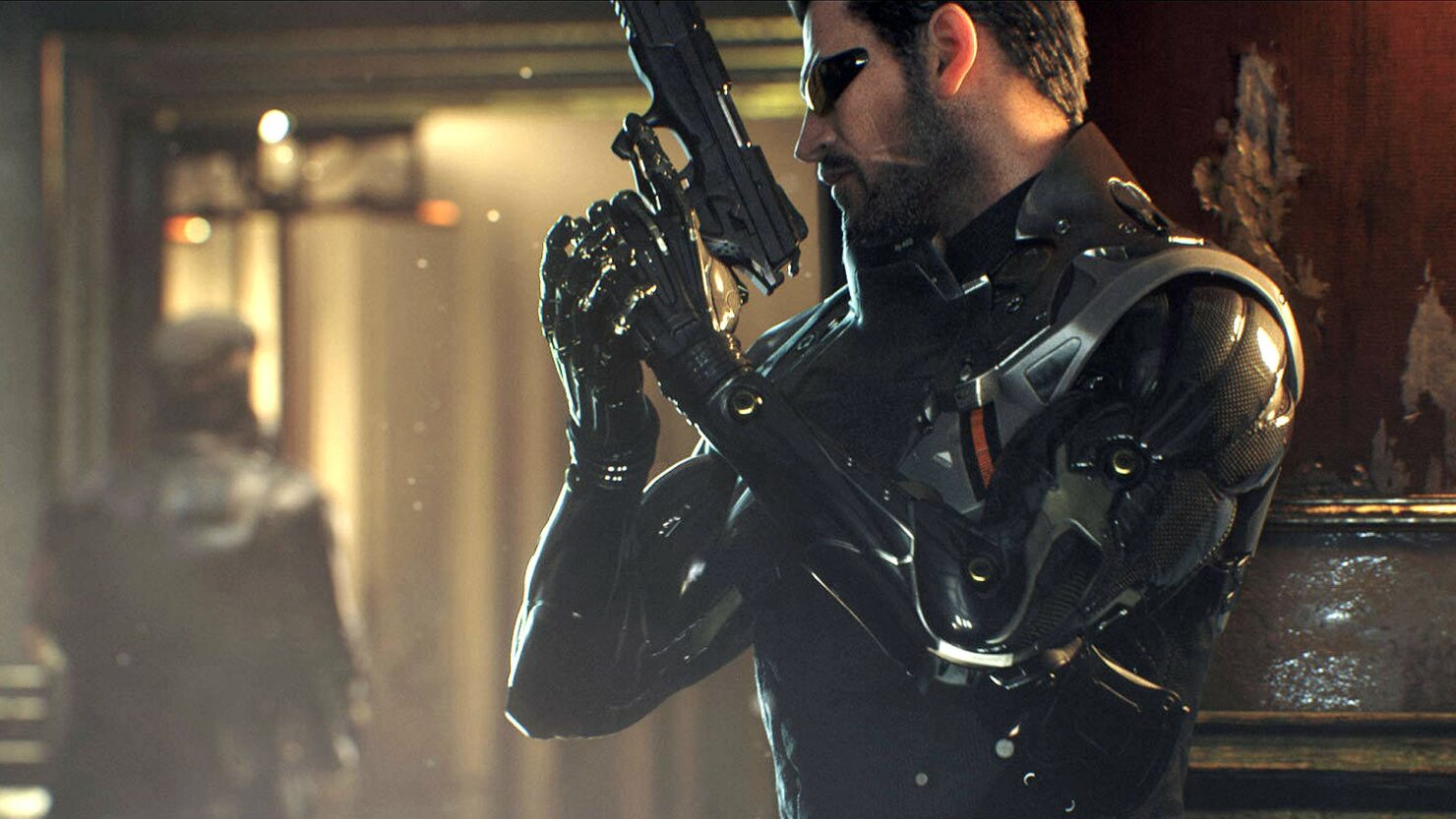 Square Enix just officially unveiled all of its plans for Gamescom 2016, the annual convention due in three weeks from now.

According to the publisher, the biggest line-up ever presented for Gamescom will be on showcase. There will be more than 220 hands-on stations on more than 1,100 square meters of booth space. Square Enix is also welcoming visitors to rest and recharge their devices in front of a gigantic LED in the middle of the booth.

Just like last year, Square Enix will be located in two booths. The main one (Hall 9, B31/B41) will feature hands-on stations for the biggest titles, while a special event called FINAL FANTASY XIV: BATTLE ARENA will take place on Hall 9, C51 where gamers face-off against all the powerful primals featured in the game in order to win attractive prizes, fans can also enjoy show matches on stage, a signing session, and a cosplay competition.

At this year’s E3 we presented our biggest line-up ever. At Gamescom 2016 we will set another mark with the biggest show in our history. We are very happy to offer hands-on of these highly-anticipated titles to gamers from all over the world.

There will also be a Square Enix Products booth (Hall 5.2, booth E12) where fans can purchase special items such as Final Fantasy XV's Ignis Play Arts KAI and Silver Pendant Ring of Lucii. Without further ado, here's the full line-up for Gamescom 2016; the press release did mention that more information on the reveals and announcements due at Gamescom 2016 will be available in the coming weeks.

DEUS EX: Mankind Divided
Platform: PlayStation®4 system, Xbox One®, the all-in-one games and entertainment system from Microsoft, Windows PC
Developer: Eidos-Montréal (a Square Enix studio)
Available: August 23, 2016
Deus Ex: Mankind Divided™, the sequel to the critically acclaimed Deus Ex: Human Revolution® , builds on the franchises trademark choice and consequence, action - RPG based gameplay, to create both a memorable and highly immersive experience. Players will once again take on the role of Adam Jensen, now an experienced covert agent, and will gain access to his new arsenal of customizable state-of-the-art weapons and augmentations. With time working against him, Adam must choose the right approach, along with who to trust, in order to unravel a vast worldwide conspiracy. The game also includes Deus Ex: Mankind Divided – Breach , a new and innovative game mode. This new take on the game offers, for the very first time, an arcade approach on the gameplay of Deus Ex: Mankind Divided , providing players with a unique puzzle shooter experience.

DRAGON QUEST BUILDERS
Platform: PlayStation® 4, PlayStation® Vita
Developer: Square Enix
Available: October 14, 2016
DRAGON QUEST BUILDERS provides players the ability to build a variety of unique tools from materials you gather, and rebuild towns and cities to restore life to the shattered world of Alefgard. Players will battle with famous monsters from the DRAGON QUEST® series and interact with gorgeously designed 3D characters. The immersive DRAGON QUEST story and world to explore, combined with the freedom of sandbox gameplay, provides a new and exciting, family-friendly experience, with an intuitive control system, will have you building the towers and castles of your dreams in no time.

FINAL FANTASY XII THE ZODIAC AGE
Platform: PlayStation® 4
Developer: Square Enix
Available: 2017
FINAL FANTASY XII THE ZODIAC AGE™ improves upon the 2006 classic FINAL FANTASY XII, now more beautiful and easier to play than ever. The HD remaster introduces several modern advancements, including reconstructed battle design and a revamped job system. With newly implemented trophies and share functions, as well as stark visual and sound improvements, players both returning and new to the game will experience a grand adventure that spans the world of Ivalice in an entirely new and improved way.

FINAL FANTASY XV
Platform: PlayStation® 4, Xbox One
Developer: Square Enix
Available: September 30, 2016
FINAL FANTASY XV is a groundbreaking fantasy based on reality that is destined to become a future masterpiece - with revolutionary gameplay, dramatic storytelling, and cutting-edge technology. Escaping the flames of war, Noctis, the Crown Prince of the Kingdom of Lucis, embarks on an epic journey with his best friends - through a world of larger-than-life beasts, amazing wonders to behold, and dungeons filled with danger, in the hopes of finding the strength to take back his homeland and end the battle.

HITMAN
Platform: PlayStation® 4, Xbox One, Windows PC
Developer: Io-Interactive (a Square Enix studio)
Available: Now, New episodes releasing throughout 2016
The creative stealth-action game HITMAN sees players perform contract hits on powerful, high-profile targets in exotic locations around the world, from the highly fashionable Paris and sunny coast of Italy to the dust and hustle of the markets in Marrakesh in this creative stealth action game. Gameplay focuses on taking out targets in huge and intricate sandbox levels with complete freedom of approach. Where to go, when to strike and who to kill - it is all up to you.  For the first time, HITMAN leads with a digital release inviting players into a world of assassination.

RISE OF THE TOMB RAIDER: 20 Year Celebration
Platform: PlayStation® 4, Xbox One, Windows PC
Developer: Crystal Dynamics (a Square Enix Studio)
Available: October 11, 2016
Crystal Dynamics® and Square Enix continue to celebrate 20 years of Lara Croft, the gaming world’s iconic heroine, with Rise of the Tomb Raider: 20 Year Celebration. This new version will include the award-winning Rise of the Tomb Raider game; a completely new story chapter entitled “Blood Ties”, new co-op Endurance gameplay, PlayStation VR support for “Blood Ties”, all of the previously released DLC, more outfits, weapons, and Expedition Cards. With the exception of VR support, all of the new content in Rise of the Tomb Raider: 20 Year Celebration will also be available for Xbox One and PC players. Current Season Pass owners on Xbox One and PC will automatically receive the content for free, and moving forward the existing Season Pass will be updated to include the new content. There is no Season Pass on PlayStation 4, as all of the content is included in the initial release.

WORLD OF FINAL FANTASY®
Platform: PlayStation® 4, PlayStation® Vita
Developer: Square Enix
Available: October 28, 2016
In WORLD OF FINAL FANTASY, players will lead a pair of twins, Reynn and Lann, on their journey through the world of Grymoire on a search to rediscover their lost memories. Throughout their journey, players will collect, raise and battle with the adorably familiar beings throughout the world including cactuar, chocobo and behemoth to customise and stack their army of monsters to create strategic tower combinations and take on even the most challenging of opponents.

THE TURING TEST
Platform: Windows PC
Developer: Bulkhead Interactive
Available: August 2016
You play the role of Ava Turing, an engineer for the International Space Agency (ISA) who attempts to uncover the truth behind the research base on Jupiter’s moon, Europa, in this gorgeous first-person puzzle game built with Unreal™ Engine 4. Solve puzzles using your Energy Manipulation Tool (EMT) to transfer power out of one object and into another; power up and take control of artificially intelligent machines, manipulate giant structures and solve complex tasks - all woven into a multi-layered story based on the human struggle for control. The Turing Test will be published for PC by Square Enix Collective in August 2016.

BLACK THE FALL
Platform: Windows PC
Developer: Sand Sailor Studio
Available: 2016 TBC
Black The Fall is an immensely atmospheric side-scrolling action adventure for PC and digital consoles set in a dark and oppressive land, inspired by the Sand Sailor team’s upbringing in Communist Romania. Discover a forgotten industrial world where strict rules and harsh punishments tore the fabric of humanity itself. What will you do to survive? Solve puzzles to progress, all the while attempting to avoid suspicion and alerting the intent… and unfriendly… gaze of the State. Black The Fall will be published on both PC and Console by Square Enix Collective later in Q3 2016., with console versions available in early 2017.

TOKYO DARK
Platform: Windows PC/Mac
Developer: Cherrymochi
Available: TBC 2016
Tokyo Dark is a side scrolling point-and-click mystery adventure game for Windows and Mac. As Detective Itō you'll explore Tokyo - following leads, collecting clues, and making difficult decisions with far-reaching consequences. Tokyo Dark features a huge number of dialogue choices and interactions that affect character attributes and change the outcome of the story. Unlike a visual novel, you’ll control Detective Itō directly as you explore Tokyo, trying to balance your professional duty, personal life, and sanity. Will the past come back to haunt you, or will you stand by your decisions?

OH MY GODHEADS
Platform: Windows PC
Developer: Titutitech
Available: Q1 2017
Oh My Godheads is the world's first capture-the-head action game for 1-4 players. Capture-the-head is like capture-the-flag, but the flag is an ancient head that's alive, angry, and after you! Fight with friends to capture these furious, living heads and bring them back to your team's plinth...if you can. Born from a love of old school multiplayer games like Micro Machines, Worms, and Street Fighter, Titutitech wanted to recreate the fun, fast-paced multiplayer experience of those games while adding full 3D environments for more tactics, more depth, and more replayability. Oh, did we mention it's got exploding pies?

GOETIA
Platform: Windows PC/Mac
Developer: Sushee
Available: Out Now
A haunting point-and-click adventure, Goetia puts you in the ghostly shoes of Abigail Blackwood, recently risen from the grave, who knows nothing about the last 40 years of her family’s history. Help Abigail find out what went on in the manor, and the nearby ruins of Oakmarsh village – what happened in the place you grew up, and what led to its downfall? Tough puzzles and a deep story awaits, as you piece together the mysticism and fanatical experiments that took place, to reveal the disturbing truth of your family’s past...

DEUS EX GO
Platform: Phones & Tablets
Developer: Square Enix Montréal (a Square Enix studio)
Available: Summer 2016
Deus Ex GO is a turn-based infiltration puzzle game set in a stylized interpretation of the Deus Ex Universe®. As double agent Adam Jensen, you’ll use hacking, combat, and augmentations to solve the most challenging puzzles of the entire GO series. Work alongside your allies in TF29 and the Juggernaut Collective as you infiltrate locations to unravel the conspiracy behind a terrorist plot.