This is going to be a review of The Walking Dead Onslaught, I promise. First, I want to talk about the property itself. The Walking Dead, as a gaming property, is incredibly strange. If I was to think of the perfect TWD game, a few pop to mind depending on your goals. If you want pure action, games like Left 4 Dead and World War Z have truly succeeded in capturing the massacring of zombies. Thinking about survival, it's hard to look further than State of Decay or Project Zomboid. Other games like Dying Light and Days Gone have something to offer.

Looking at the series, we've had a mixed bag. It's difficult because the first game set a remarkably high standard. Telltale Games' outstanding adventure game series captured the essence of TWD's storytelling perfectly. It gave us amazing characters, difficult decisions and genuinely touching moments. Activision decided to drop out The Walking Dead: Survival Instinct in the same way you would drop a bag of faecal matter. Overkill's The Walking Dead wasn't much better. I would write about the mobile titles (Road to Survival, No Man's Land and Our World) but like most mobile titles, they're over-monetised trash. The Escapists: The Walking Dead was an interesting little spin-off. It was only the start of this year that The Walking Dead: Saints & Sinners released to great acclaim, bringing us both a great VR game and a great The Walking Dead game.

This brings us to The Walking Dead Onslaught. The second VR game based on the same IP in less than a year. Onslaught does have an advantage though, this is the official game of the hit tv show. Why have I written about the general series for two full paragraphs? You'll find out soon. 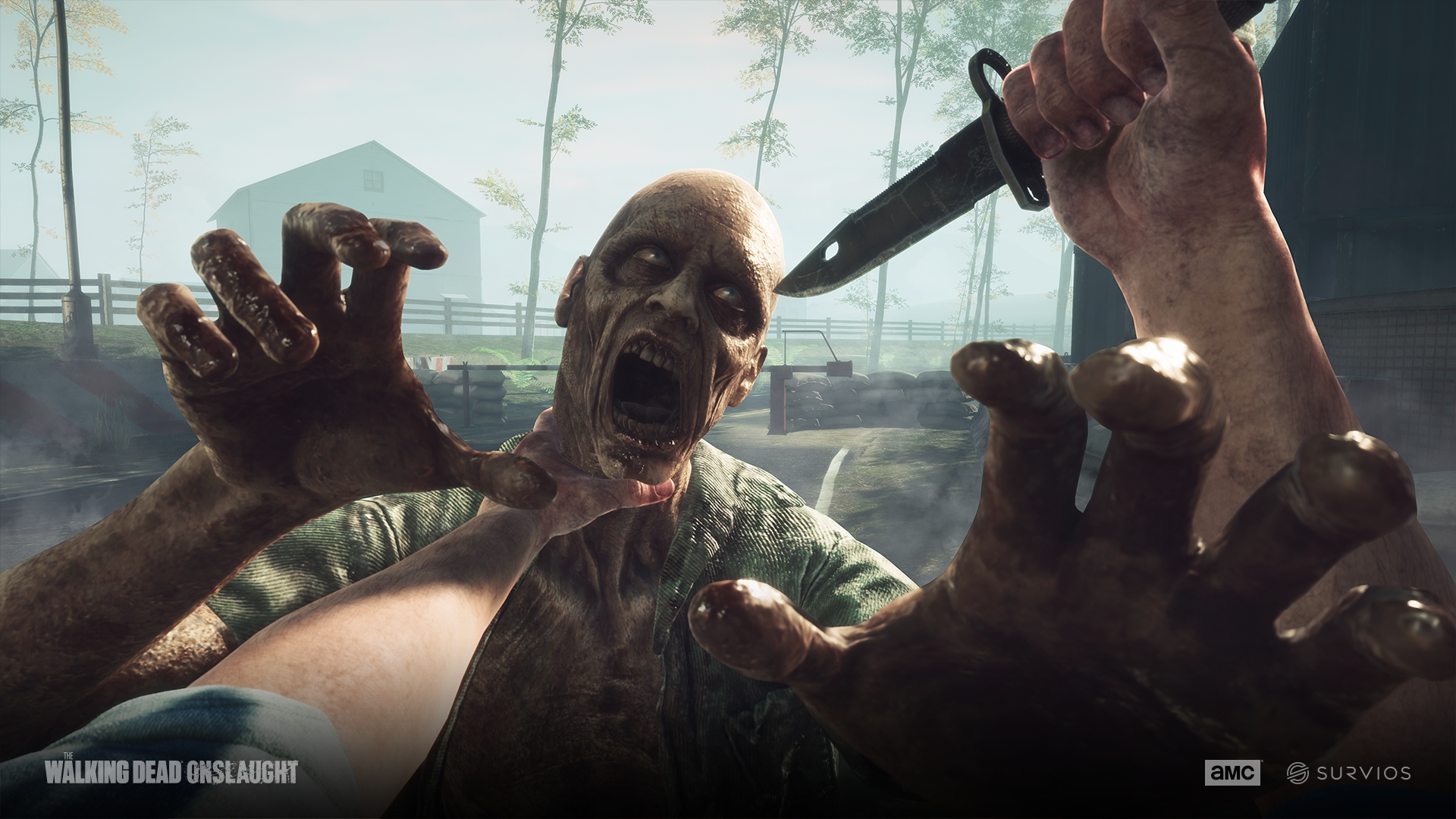 As it’s the official game, you get some tie in elements. It uses the likeness of Daryl, Rick, Michonne, and more. You also have the actors of Daryl, Eugine and Carol voicing their characters, adding that little extra to the game. The disadvantage this brings is that those characters who aren't voiced by the real people can come off sounding wrong. Rick is the biggest case of this simply because he's got more lines. While the actor does a decent job at times, most of the time he sounds like a person doing a bad Rick impression.

What I will say is that the writing isn't too bad. It's not great, but it's not bad. Working with the creators of the show, Survios has created a plot that feels like it'd fit into the show. It'd be a filler part of the show, somewhere in Season 7 or 8, but it still suits the show. The story, for what little there is, has Daryl getting involved in helping a woman search for her missing daughter. That's it. I can't say it's interesting because it isn't. The majority is presented in a way that Daryl is telling Rick what happened.

As for the gameplay within the missions, it all boils down to killing zombies or running away from zombies. This is a game based on The Walking Dead, so I can't say I expected much more, but I would have liked a bit more characterisation. The campaign comes in at around five to six hours. To extend the length of the game, The Walking Dead Onslaught comes with padding and lots of it. This padding takes the form of supply-run missions, where you go around... well, collecting supplies. 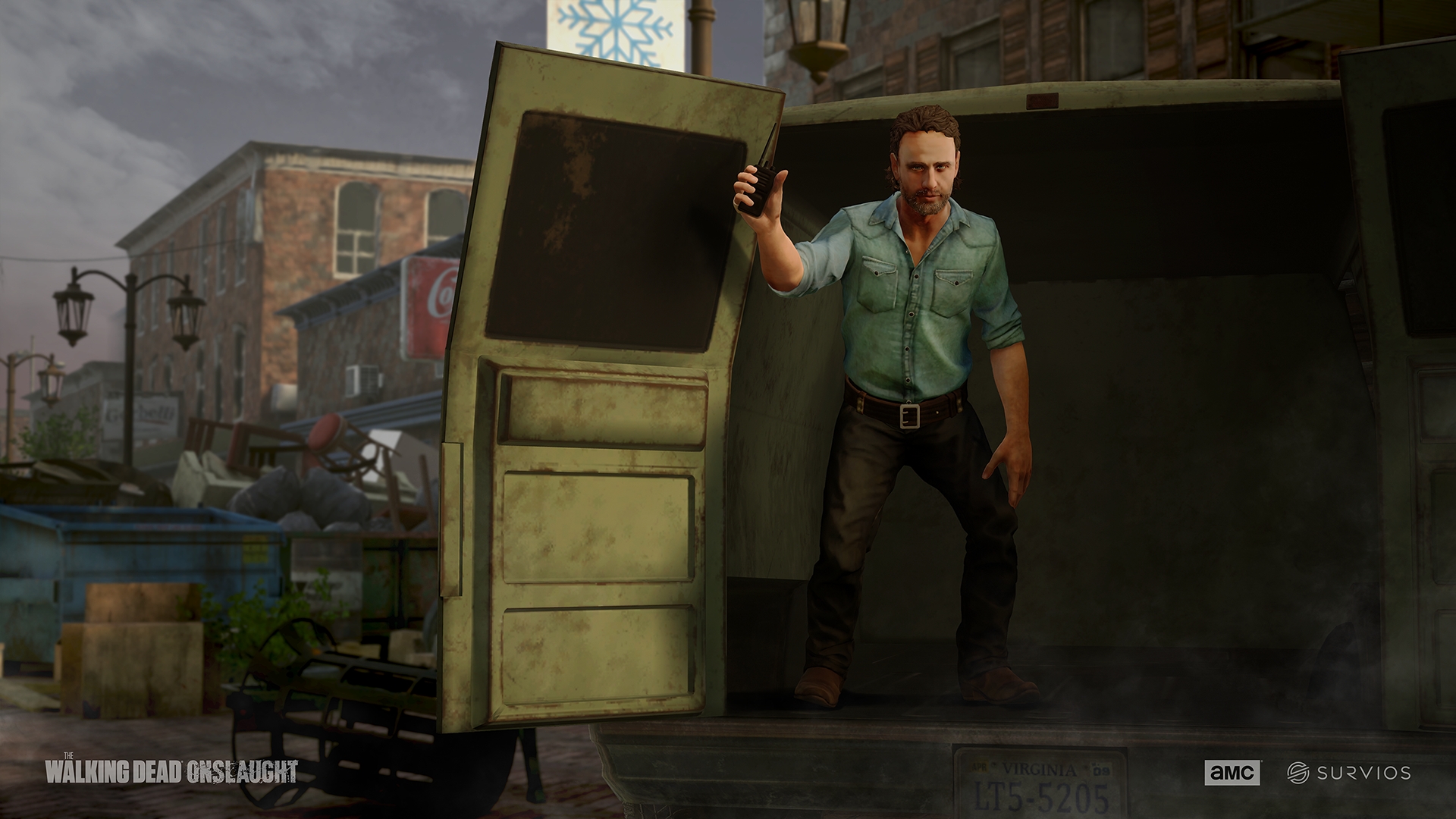 These missions can either take the form of a linear path with a few off-shoot buildings, all the while a red line is moving in, representing a swarm of zombies. You feel like you're in the world's worst game of Fortnite. Others will pop you in an area to scavenge, you've got a set amount of time before Eugene arrives with the van, ready for you to escape. All of this is to gather survivors that you never see, as well as materials used to mod your weapons and build some buildings in Alexandria.

What is annoying is the fact that you're forced to do these prolonged fetch quests just to progress with the main story. There is a bit of an incentive to do them anyway. As you build up more areas of Alexandria, you can see the buildings develop. It's a nice little feature that reminds me a little of building in State of Decay. You also get perks like extra health capacity, extra food from each mission completed, and more, from building these buildings.

I did tell you that you can upgrade your weapons too. Some abilities, like letting you regen some health when braining a zombie that you're choking, or the red dot for the pistol are useful enough. Others are... okay. Frankly, you won't care about upgrades for most of the guns. I'll be telling you why in a few short paragraphs. 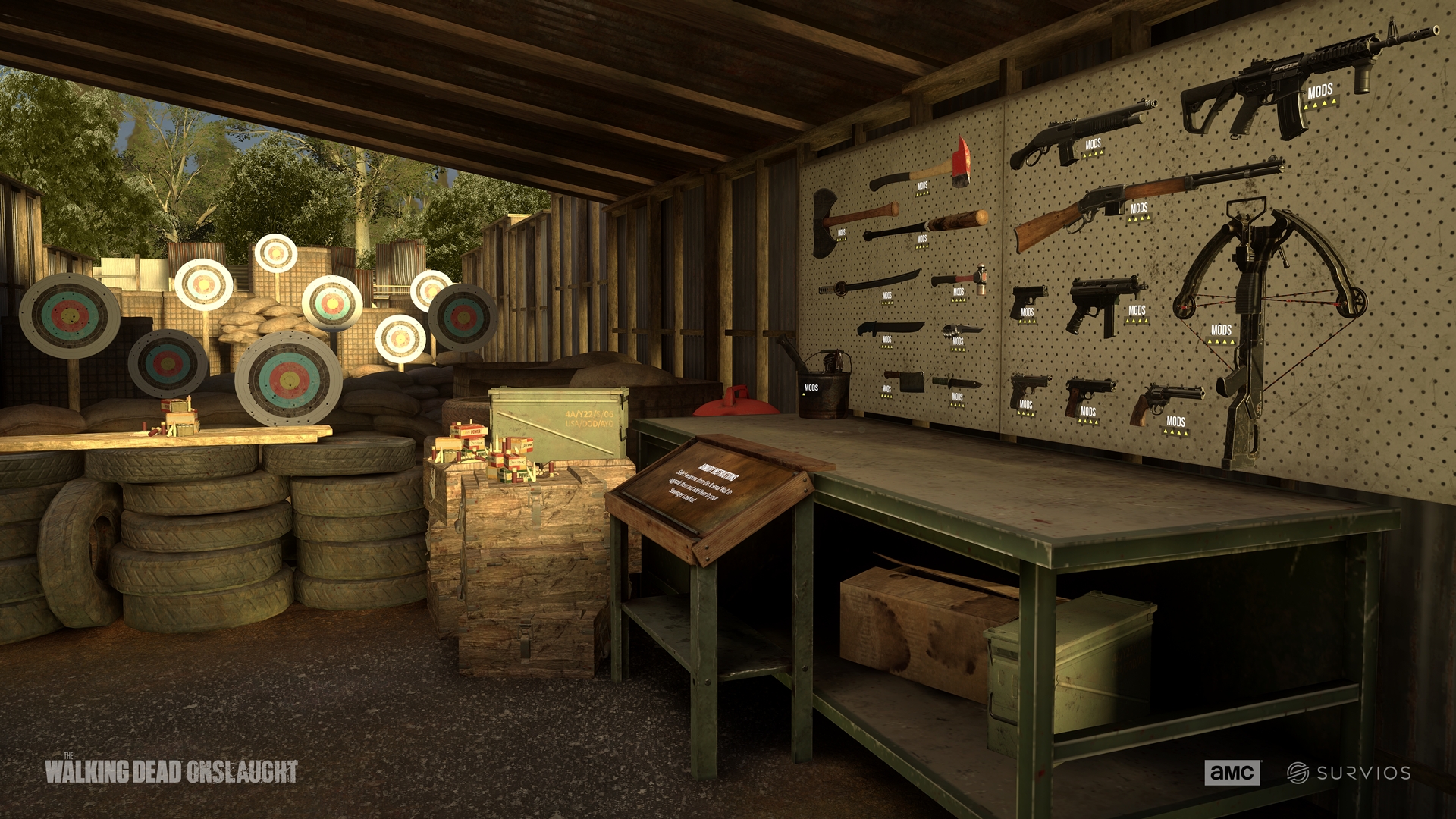 All of this is just a framework for The Walking Dead Onslaught to do what it's good at, killing zombies. It's damn good at that to be fair. Killing a zombie can leave a very satisfying head-shaped wound on a zombie's neck, or a knife piercing right into their cranium, or just part of the head completely missing. It's a little easy, but that doesn't stop it being fun. Upgrade your knife and just aim for the head. Hit it right, it's a one-hit kill. If all the zombies are in front of you, just rinse and repeat until the horde is gone. At least some of them will attack from behind, creating a bit of tension.

I've enjoyed swinging for the fences with my imaginary pipe wrench, axe, knife and more. Melee combat is infinitely more satisfying than the guns, which annoyed me more than anything. I've seen the blood spurting from the zombie's head, but it won't go down. If The Walking Dead and other zombie media has taught me one thing, it's that "a bullet to the head puts down the dead". Not in The Walking Dead Onslaught. It's a shame because the guns feel good to use. They're just useless compared to melee weapons. Three headshots should not be required for a regular zombie.

Everything is made that much easier and more satisfying by Survios using their VR knowhow to benefit the game. Accessibility is key and the game pushes for this, both turning and moving have multiple options. For moving, this can be done by the joystick, by swinging your arm or through teleportation. Turning can be done by simply turning yourself, using the joystick for a smooth, fluid, motion, or with rapid 90-degree turns. Control-wise, I can't fault the game at all, though some of the interactions are naff.

Well, what few interactions there are. You interact with zombies, doors and gates. Sometimes a few locks on doors or gates. To an extent, with reloading ammo, though that's kept quite vague for your advantage. Move your arm to the side, bring it vaguely in the direction of your gun. The problem is that for picking up items, ammo, health kits - you simply point at them with your non-dominant arm and click. They'll zoom into your body, all sorted. This arm also gets used for holding a zombie by its neck, making it even easier to have a go at the head. Everything else is just stationary, untouchable set design. A lot of it gets reused too. 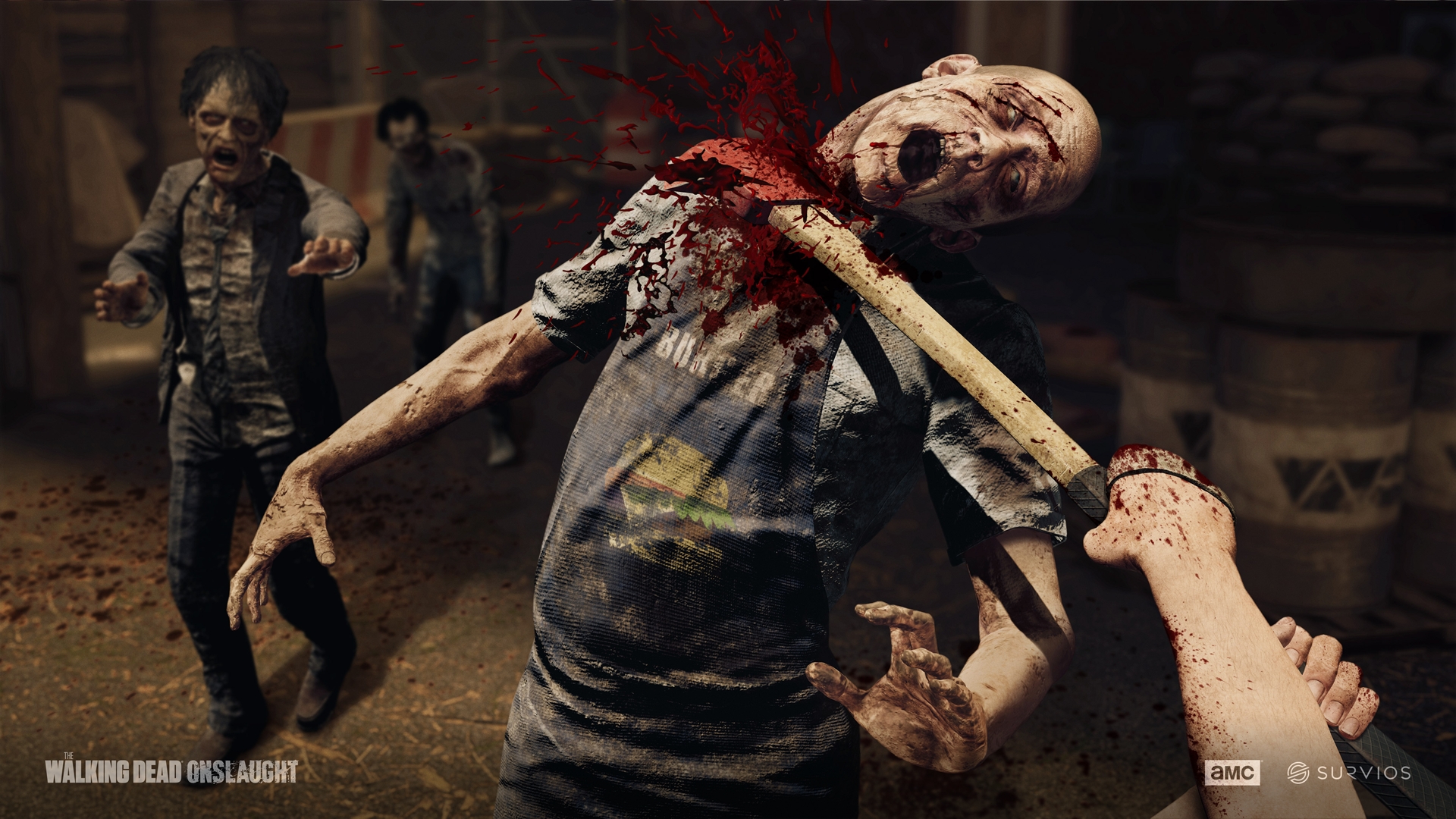 This is my core problem with The Walking Dead Onslaught. It's just boring and samey. Killing zombies is fun for a while but after an hour or two, It gets boringly repetitive. This is exasperated by the fact that every mission is one long-winded, unnatural corridor. It doesn't help that the writing is sub-par and that the game doesn't look that good due to the repetition and the dull greys and browns.

A quarter of my review was writing about the series because, honestly, there's nothing else to write about The Walking Dead Onslaught. It's a tedious and dull, but ultimately an inoffensive hack 'n' slash VR game. The benefits gained by zombie killing and developing Alexandria are sadly outweighed by the negatives of boring level design, sub-par writing and way too much grind. The only other positive thing I have to say is that I've at least had a few decent workouts while stabbing zombies in the head.

The Walking Dead Onslaught is, at best, a mixed bag of a game. The VR aspects are well made, Survios using their VR experience and making a very accessible title. They have also made a game that features genuinely enjoyable zombie-killing combat. However, the problem is that this combat is surrounded by several bad elements that drag it down. Level design is just bad, missions being dull, uninspired, taking place in terribly repetitive corridors. There's a massive amount of grind used to pad out the game length, acting as a barrier to story missions. Even then, the story is shoddy, the only advantage being some decent voice acting by three actors from the show. All in all, I could only recommend this to huge fans of TWD and those happy enough to deal with quite a few negatives to play some reasonably entertaining combat.