My favorite part of Overkill’s The Walking Dead are the moments that build up before everything goes to hell, and they will go to hell. Just when you think you carefully navigated around a horde of Walkers, an errant gunshot or the wrong door being opened results in you and your compatriots being surrounded. Before you know it, you’ve burned through most of your ammo, teammates are downed and you’re left with a slow firing crossbow.

You’re all dead and the in-game chat is filled with expletives from dejected teammates. That’s Overkill’s The Walking Dead at its best. At its worst, it’s a frustrating attempt to capture the same essence that made the Left 4 Dead franchise so popular.

A routine scavenging mission quickly spirals out of control whenever the first gunshots are fired. The key is managing how late into the match you want to get overwhelmed by a horde of zombies. If you played any of the PayDay games, the quiet moments before your heist prior to the cops arriving is what this feels like. Things will go bad at some point, your job is to be ready for it. 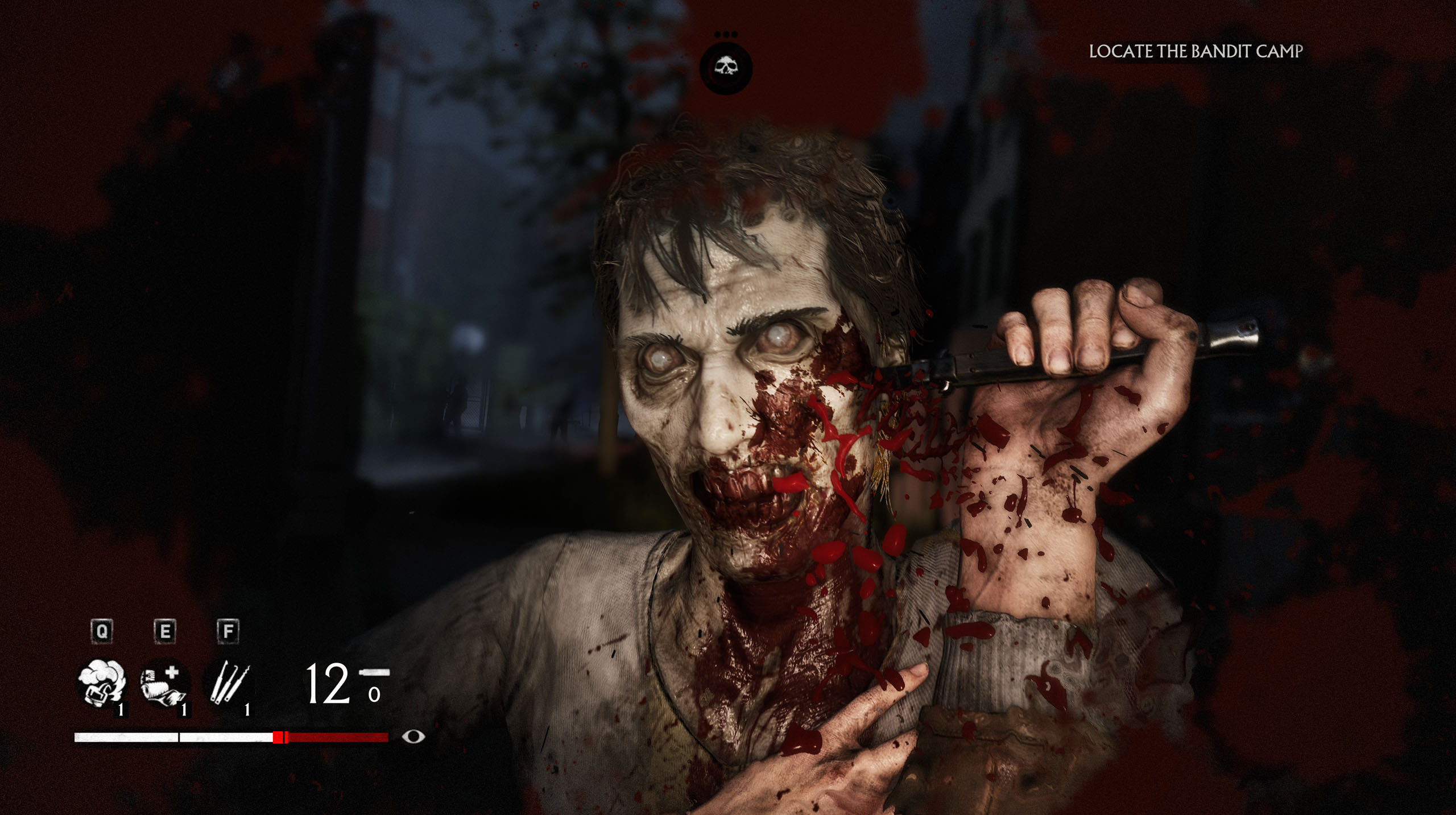 All missions more or less start of the same way. You sneak around the best you can, coordinating with your team, solving environmental puzzles like figuring out how to open a gate with a car battery and scavenging supplies along the way. Most missions will end up the same way, too. You’ll wait for extraction in an area for a couple of minutes as Walkers or Family come flooding in until you are unceremonially whisked away from the combat.

As a single foe, zombies are fairly easy to manage. They can be rope-a-doped pretty simply so you can get behind them and take them down in one hit. It’s when they gang up on you where you want people to focus on crowd control. Zombies can be shoved into groups to give you space but before you know it, you may be surrounded. At this junction, the name of the game becomes more about strategic retreating and forcing zombies into choke points.

It’s not just Walkers you’re dealing with. You also have The Family, a group of rival survivors, who aren’t big fans of you and your group. If you’re familiar with The Walking Dead, you’ll know that it’s the people you really need to watch out for and this game is no different. These human enemies come equipped with guns, shields and heavy armor and often require a bit more finesse to take down their undead cousins. Enemy camps can be snuck into where you can stealth a few bad guys before things turn upside down. There’s a meter that will let you know how alert the camp is to your presence so making noise or firing an unsilenced gun are definitely things you'd want to avoid. 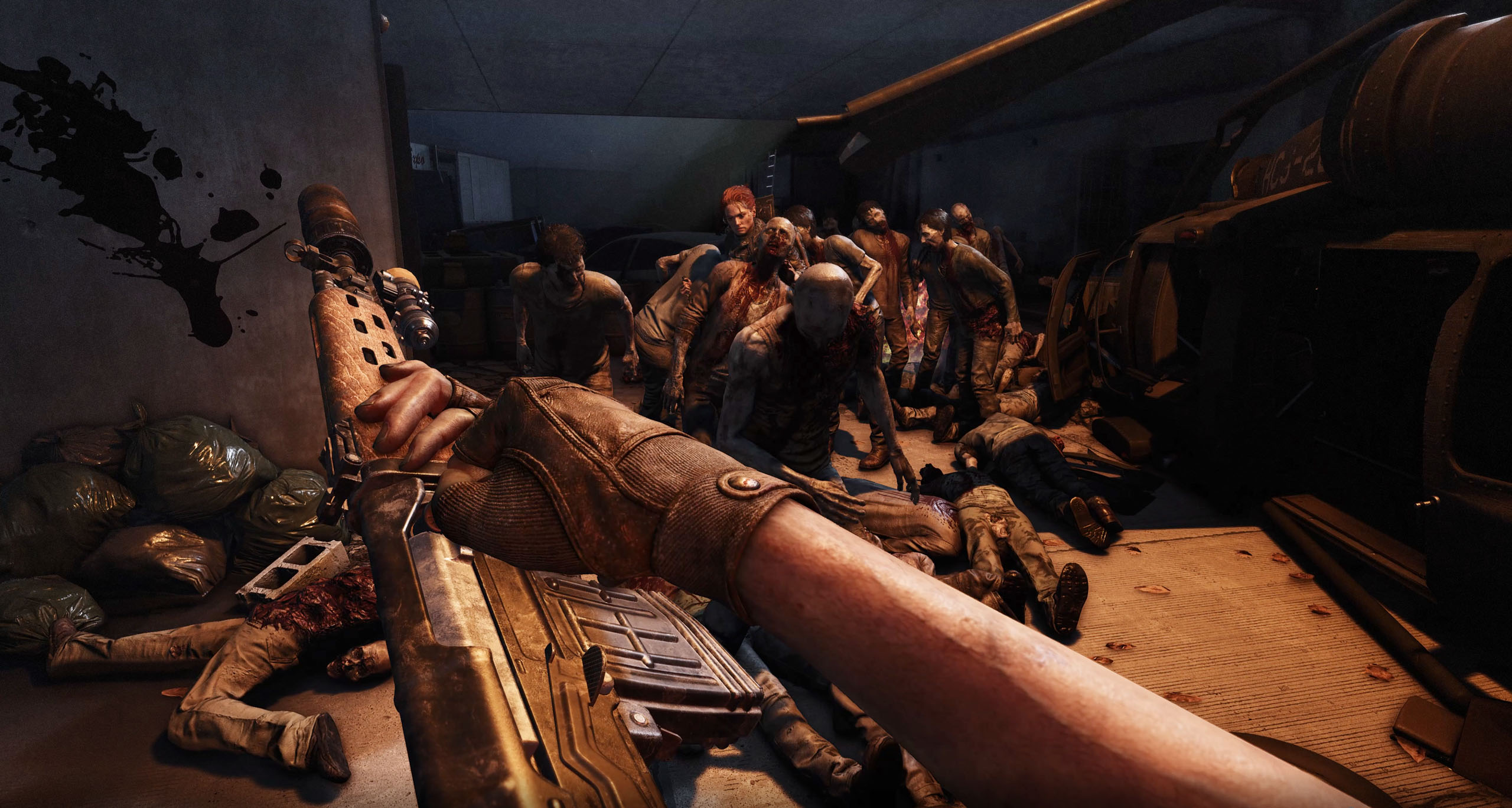 Gunfights are frantic and the sound of gun-fire will attract Walkers as expected. One popular strategy to employ is using noises to lure the Walkers in a camp and have both of your enemies lay waste to each other while you hunt around for your objectives. Most of the objectives involve retrieving items, then surviving waves of walkers before you get extracted.

The major problem is the enemy AI of Overkill's The Walking Dead is mostly a mess. Human or Walker, the attack pattern is always the same. Run at you with reckless abandoned. Humans sometimes take cover and throw grenades but will mostly bee-line for the objectives you need to protect. There are times where I would mow down a handful of enemies before the other even bothered to look in my direction.

The only real times you’ll die is when you’re plainly outnumbered. What most people end up doing is picking Maya, the medic, who can lay down a med bag and heal up whoever uses it. There are other classes like that fall in the usual Tank, Scout and Tactician classes. The only real difference is in their passive and throwable skills. Aidan has a ton of health and his flashbangs are great for fighting humans whereas Grant can ‘Mark’ enemies allowing them to take more damage from the party. Heather is great for spotting traps and loot in the world. Her smoke grenades are also pretty useful and can buy you some time to regroup. 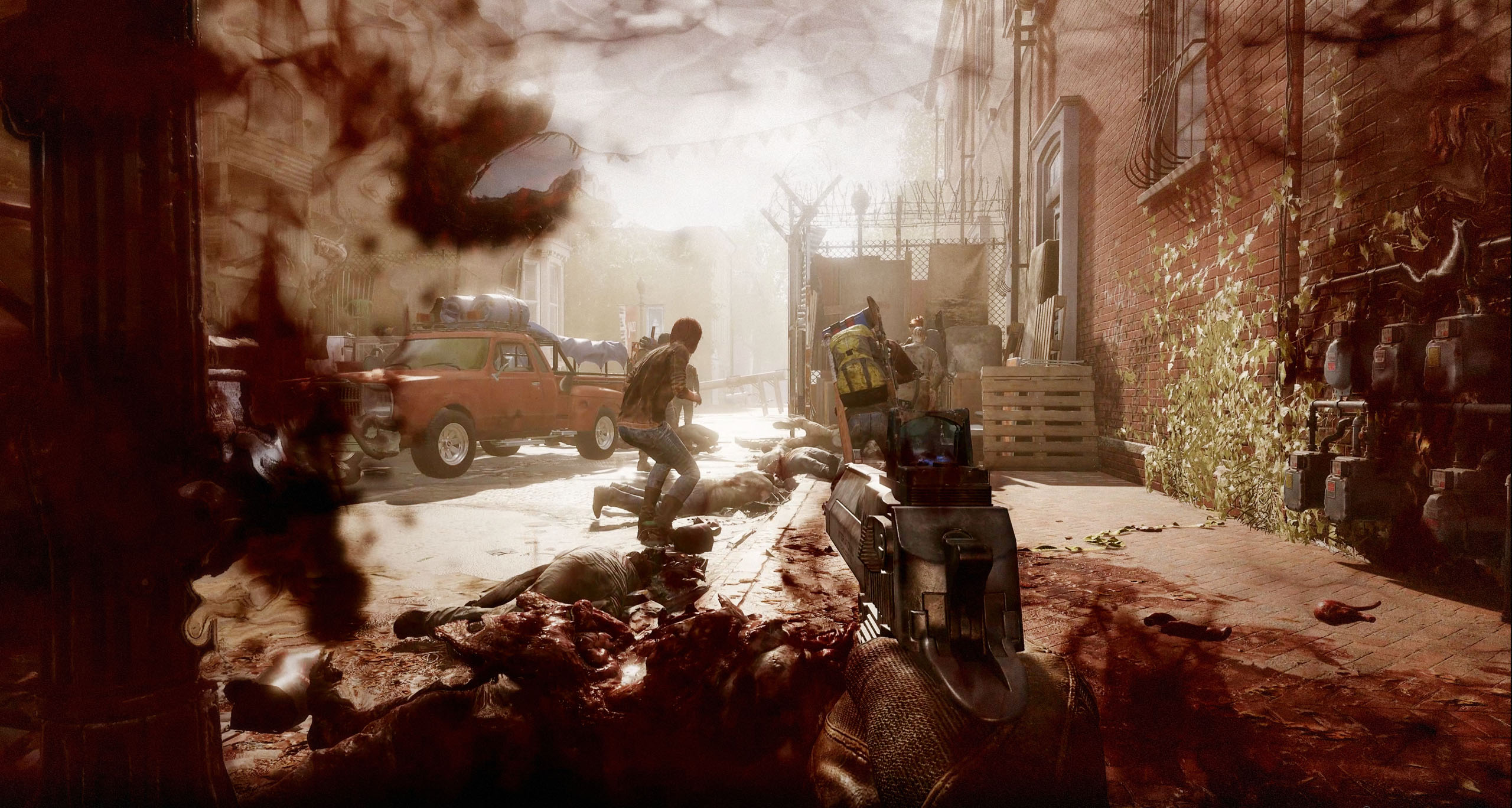 You can level up fairly quickly and then dump plenty of points into each character the more you play. Each character can equip any weapon but they have their own proficiency with certain weapon types that should be taken into account.

When you’re not hitting Walkers with baseball bats, you'll spend a lot of your time managing your camp. Every time you come up from a mission, you have a chance to upgrade your camp. The management layer mostly involves keeping camp morale up. As the camp levels up, you’ll unlock new areas and rescue missions to grow your numbers. More import

The real big issues for Overkill's The Walking Dead come in its technical shortcomings, specifically joining matches take far too long for my liking. Each session, so far, has taken three-plus minutes to join with six minutes being the longest time to join a match. It’s a bummer because these long wait times tend to suck any momentum you may have going on for yourself. I was also booted from matches randomly, which was extra frustrating after a particularly good run with a group of players that seemed like they knew what they were doing. 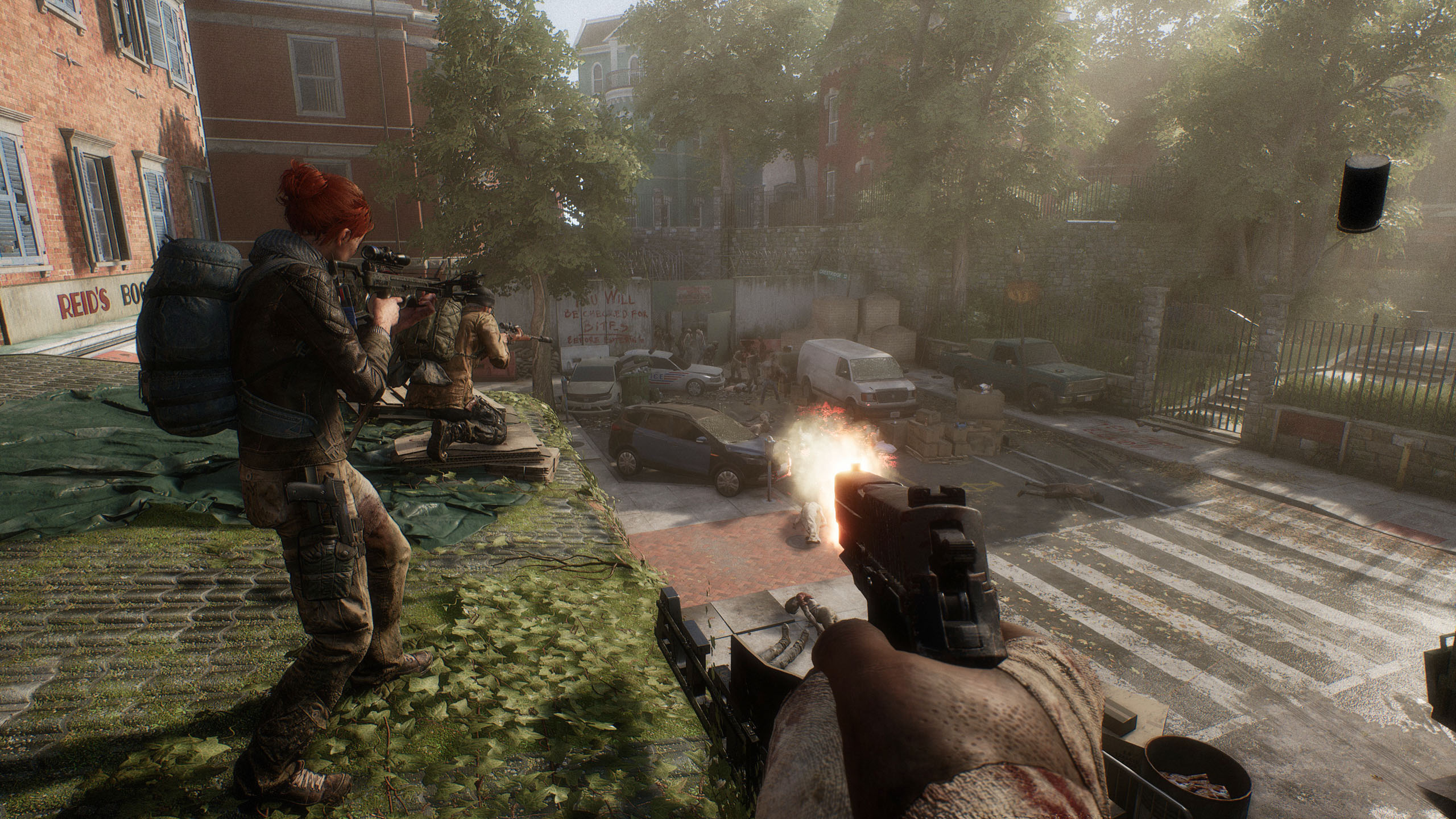 There were times where I wished I could just play an offline mode with some AI companions to move things along. Missions are easy to fail and the difficulty will spike out of nowhere right when it feels like you got a handle on things. You could start missions on your own and have players can drop-in during the match but you can find yourself easily outnumbered that way and if you’re doing an escort mission, it’ll be tough to spin all those plates.

There’s no in-game voice chat either, which is just bizarre considering how being able to communicate to your team is super important to make it through each stage. I guess you could use a third-party program with friends but when you’re joining matches with strangers, it’s tough to be on the same page. A problem we kept running into is we usually had a player (in most cases, me) venture too far out and attracted the attention of a horde of walkers. This forced our team to scramble and try our best to kite the Walkers into our machetes without losing too much health.

Review code provided by the publisher. You can purchase the game on Green Man Gaming.

A gorgeous looking co-op zombie shooter that's plagued with a horde of technical issues and diseased-ridden AI, Overkill’s The Walking isn’t a terrible game but compared to more polished cooperative shooters, it just comes up short in so many ways.