Over the past few years, hits like The Talos Principle and The Witness have carved out their own little brain-teasing subgenre. Of course, every breakout success inspires countless others dreaming of their own indie game glory, so we’re now inundated with first-person puzzlers boasting stylish visuals and lofty themes. Unsurprisingly, most of these games don’t quite measure up to their inspiration. Enter The Sojourn, the latest title to give the philosophical puzzler thing a go.

Don’t get me wrong, I’m certainly not saying The Sojourn can’t be worthwhile in its own right. Just because a game is obviously inspired by others doesn’t mean it can’t also forge its own path. So, is The Sojourn a pleasing puzzler? Or just not worth the trip? Let’s find out…

The Sojourn casts players into a lonely, dreamlike world, with only (disconcertingly sperm-like) balls of light to guide you. You’ll be led through bucolic ruins, a grand library, dark tower, and more, although you’re never really provided a clear goal or purpose. It’s all about the journey, I suppose.

Along the way you’ll pass various statues, which weave a fragmented tale about a child, and later young man, leaving home to attend a magic school and getting mixed up in some sort of conflict. Are these statues meant to convey a specific story? The player’s past life perhaps? Or are they more metaphorical? Meant to represent everybody’s journey through life and search for purpose? Don’t ask me! All I know is I didn’t find any of it particularly interesting. Games like The Witness manage to draw you in with that slow-burn enigmatic approach, but The Sojourn never really connects. At least the game looks nice. The Sojourn goes for the vibrant, chunky, low-texture look a lot of indies do now, but the way the game’s world constructs itself block-by-block right in front of you is undeniably impressive.

Puzzles in The Sojourn are built around a Link-to-the-Past-style dual worlds mechanic, with the bridges needed to cross certain gaps only existing in the dark world. True to the game’s title, you’re only allowed a brief sojourn in the dark world – walk too far and you’ll pop back to the regular word. Thankfully, while in the dark world, you can instantly swap places with certain statues, allowing you to jump around the stage without consuming your limited steps. The game becomes a tricky game of chess, as you maneuver statues in order get to past all the gaps and obstacles and reach the end of the stage. The Sojourn’s core mechanics are solid, and the game adds new elements like locked gates, statue duplicators, mirrors, and portals at a fairly steady pace, at least early on. Fresh ideas come less frequently in the back half of the game.

The Sojourn will test your grey matter, but it rarely becomes too frustrating. That said, the game’s difficulty curve is a bit of a mess – you’ll breeze through some puzzles without a second thought, while others may stymie you for minutes on end. The game just doesn’t ramp up the way it should. When a new mechanic is introduced, it’s mostly used in the same way with slight variations from then on. There aren’t a lot of “Ah ha!” moments where the game surprises you or uses something in an unexpected way. In a broad-strokes sort of way, you’ll usually know how to solve a puzzle almost right away, it’s just a matter of figuring out the precise sequence of moves required. None of this is to say The Sojourn’s puzzles are bad, they can be fairly satisfying, but they’re hard to get too enthusiastic about.

The Sojourn’s puzzles may not generate a ton of excitement, but they’re fun enough to zone out with, and there certainly are a lot of them. Depending on your puzzle-solving prowess, you’ll likely finish The Sojourn in around 5 to 10 hours. There are also extra collectible scrolls that can be grabbed in most stages, and several optional bonus challenges, which, together, should add another 5-or-so hours to your playtime. This game is, ironically, more than just a quick sojourn.

This review was based on a PS4 copy of The Sojourn provided by publisher Iceberg Interactive. 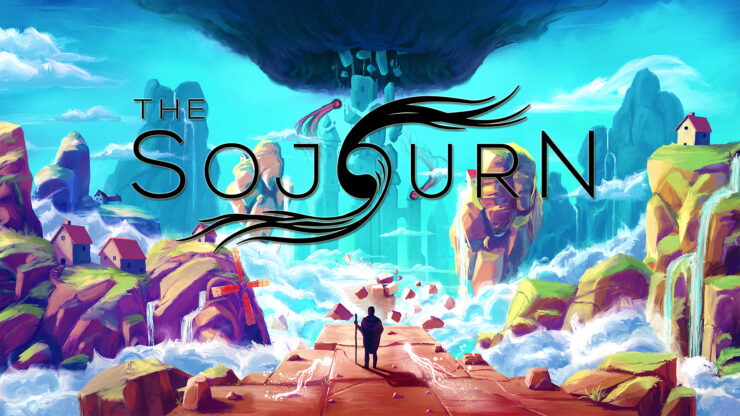 The Sojourn is the equivalent of one of those big books of crosswords you can buy at the supermarket check-out. Its puzzles are well-constructed and provide a nice mental workout, but they’re all rather one-note, and the game’s world is dry as toast. If you’re a hardcore puzzle nerd, give The Sojourn a shot, but those expecting to be taken on a deeper journey may be disappointed.

Oriental Empires Review – Not for all the Tea in China

Stars in Shadow Review – Attack of the Space Pirates