4X strategy titles, particularly ones set in space, have made quite the comeback. From large names like Endless Space, Stellaris and the rebirth of Master of Orion, to smaller titles like StarDrive and Star Ruler, there's an abundance of games (and sequels) to quench your thirst for galactic dominance. Carrying on in true fashion comes Stars in Shadow from the two-man team, Ashdar Games.

There's little doubt that Stars in Shadow hearkens back to classics of the genre like the original Master of Orion. Indeed, the game is about as traditional as you can get. However, I'd be remiss if I didn't say that this doesn't make it bad. There's a sense of style to be found here and while it borrows from others, it does more than enough to let it stand on its own as a strong example of the 4X strategy game.

Much like other 4X titles, Stars in Shadow has a number of features to juggle and keep you involved. Starting up is, sadly, fairly basic. You can select the race you want to control from the seven available. Each of these races are unique in their own particular way with some quirky, even if simplistic, writing that puts across these character traits. For example, the Orthin Conference, a race of insectoid creatures, gives you advisors called Analyst Mad Claw and Technologist Dances with Bosons.

Each race has a little flavour text that puts across who they are. The analytical and matter-of-fact nature of the Orthin or the friendly and amenable nature of the sea-horse looking Phidi. The differences reflect the style of play each race is suited for. The Phidi are best at trading and money-related activities, the Orthin are a race of scientists and the Yoral are happy to kill you and won't quickly forgive any misdeeds.

In addition to the major factions, there are a number of smaller races to encounter. Smaller creatures limited to particular planets or systems, or singular characters from the same races you can control. Examples include human pirates, Gremak slavers and more.  It's these smaller races and lone characters that add a little variety to what would otherwise be a fairly bland campaign, for the lack of a better word.

The variations between the factions are particularly noticeable with the ships available to them. It's with these ships that the game really stands out. This is particularly true due to the customisation options you have with the ships. Letting you modify your ship in a way that makes it unique to your needs. For example, adding research areas and enhanced scanners to a super dreadnought gives you a flying fortress space station that you can use to explore the rest of the universe and find new things.

Beyond the ships, you don't really find much variation. Planets all run on the same sort of buildings, which are improved through research. These are farms, mines, factories, labs and markets. In addition to these, you also have a planetary defence slot, giving you a line of defence from space attacks. Adding to this are satellite slots, where to increase the building capacity (larger ships require more building capacity) you can build spaceports or other spaceborne planetary defence objects.

Building up planets is somewhat interesting and requires some balance. You have to ensure you have transports built to move extra food from one planet to another that doesn't have enough. Planets with minor races, you need to keep them happy to prevent a revolt or eventually bring them into your faction. Not only that, production isn't shared between planets so you're going to need some specialist shipbuilding planets that ensure you can build the fleet you need.

This is where the game truly shines. Battles between ships are incredibly good and are turn-based, like the rest of the game. What really makes them shine are the smaller parts that add to the tactical aspects. Missiles that you launch can be launched from afar, left to their own devices. Bombers, fighters and landing parties act in the same way. However, ships have defensive lasers that will auto-target any nearby enemies. This leads to tactical opportunities like launching a nuclear barrage, then flying a smaller ship in close to use the enemies’ defensive laser charge, before the missiles launch for a critical hit.

Stars in Shadow isn't without its downsides. The most noticeable issue comes with the lack of any real plot or story. Emergent storytelling is good, but without even a basic starting story every game ends up feeling like much of the same. Regardless of any game you start, you're just popped in a random place in the galaxy you create and push out from there.

It all feels fairly generic to start with but certainly improves when you enter new systems. Finding planets with special features, smaller races and other spaceborne minor factions and entities adds a little layer. Space harpies, pirates and slavers, even mysterious ancient guardians that defend certain areas of the galaxy. Further to this actually comes the type and resources of the planets. Some are barren but rich in minerals or gems. Others are lush, verdant, planets that increase the output of your farms exponentially.

Aiming for simplicity does also lead to a few other areas being worse than they should be. The prime example of this is in Diplomacy. Every diplomatic action you can take uses influence. Sadly, this seems to be the only real requirement. It doesn't matter how much you and another faction hate each other, if you've got the influence you'll be able to talk your way to peace.

The major problem for this also comes with how easy this makes the game. If you build up enough influence then whenever you meet a new race, just set up as many friendly agreements as you can. Once you're allied with everybody, you win the game. Maybe you just want to ally with 80% of them, then they'll vote for you as leader of the galaxy. It's particularly more noticeable in larger games where meeting other races comes further apart, letting you work on them in your own time.

To call Stars in Shadow a good strategy game is undebatable and its unique looks also helps to carry it. The colourful, almost comic-book style approach, works well with the equally colourful and incredibly detailed ships you can build. It transfers over into the ship battles fantastically, where the number of moving parts is incredibly high. There's little more that can be said other than the game looks fantastic, relishing in a more simplistic but approachable form.

The strategy of building up worlds and fleets is strong and the turn-based battles are fantastically tactical. Most of all it's not a difficult game to pick up and play. The simplicity does damage certain aspects, such as diplomacy, but most of all it comes back to simply saying that Stars in Shadow is a good strategy game and ideal to act as a launch-pad into more complicated 4X strategy titles. 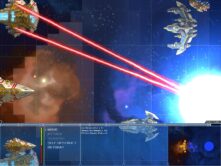 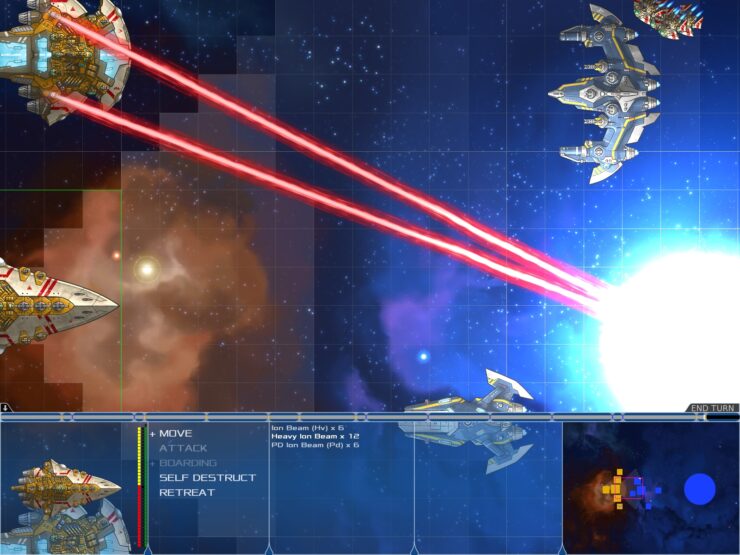 Stars in Shadow, developed by a two man team, offers a compelling but simple approach to the 4X Strategy game genre. While lacking some depth in the grand scale, it more than makes up for it with compelling ship battles, using custom designed ships that offer a great amount of customization.