It's hardly any secret by now that I enjoy my business management sims. I have done ever since the good old days of playing Railroad Tycoon or the later Sid Meier's Railroads. That's why you often find me seeking out any new management sims, from last weeks Transport Fever 2 to older titles like Railway Empire, or Train Valley. So how about Railroad Corporation? Well, it's got railroads in it and you run a corporation, can't fault it for the accuracy of its name.

Where I can fault it, however, is in the running of the game. Or, I should be more specific, certain aspects of the game. I really want to like Railroad Corporation - though that isn't saying much, I want to like every single game I play. Why wouldn't I? I may be slowly killing myself with late nights, scotch and debauched conductors, but I'm no masochist.

If that gives away my general feeling towards Railroad Corporation, don't fret - it's the long, meandering, scenic route that makes the journey worthwhile. Step away from the yellow line and don't fall on the tracks!

Actually, stepping onto the tracks may be the right thing to do here, if only to show your displeasure towards them. I don't know what it is with railroad sims lately, but it's incredibly annoying that the only one that seems to get crossings, line management and the AI right now is Train Valley of all things. Other games have a mixture of these things and Railroad Corporation has... You know, the more I think about this, the worse my opinion gets of railroad tycoon and simulator games in general.

Here in Railroad Corporation, all too often I've created multiple routes, branching tracks and more to let my ever-growing fleet of trains get around each other with as fewer delays as possible, to be let down by the idiotic AI. I can't say this as a certainty, but I genuinely think the computer picks the shortest possible route and won't deviate once it's started. What this means is that if another train happens to be on the same track and there's a bypass, they'd rather have a standoff to equal that in The Good, The Bad and The Ugly. At one point, I had five trains all stationary across three lines because one simply refused to use a bypass.

It doesn't help that the laying of the tracks can be finicky as all hell. You can place it in increments, but the game tends to not detect all of my mouse clicks in longer sessions (methinks there's a bit of an issue here - in one prolonged session the game was using 6GB of RAM). Also, as handy as placing it in increments is, it's still a little too fiddly and I genuinely don't think it even follows it's own rules. Sometimes the track will create a nice, smooth, fast angle joining onto another track. Other times, using the same angle, it wants to create a corner that slows your train down to the speed of a quadriplegic, geriatric sloth.

So what am I saying? Give me some bloody signals. Give me some control over the rails. Bring in proper junctions and crossings. I'm genuinely perplexed with how the simulation genre could have advanced as far as it has, bringing some outstanding titles, but the railway segment of it has regressed decades. Is this all due to the removal of grids? If so, bring them back. Grid me up because this just isn't working now.

You know, I could have been fine with the very-restrictive track building if the AI was better, but it isn't. As I said, too often will the trains outright refuse to take a track that is clear to them, every train just wants to crowd on one line all of the time, even if there are three and they're all interconnected through some painstaking work. The AI also makes the opposition company too little of a challenge. On rare occasions, it seems to get a decent start, but that is rare. If you get your first line up and running, bringing in some quick early cash, you may as well crown yourself god of all things rail.

Which is a shame because there are some genuine high points to Railroad Corporation. In particular, you want to look at the corporation part of the name. Here you have a lot of control over the side-businesses should you want to. From buying plots of land or currently established businesses ranging from supply-side (wheat fields, mines) to mid-stream (steelworks, linen factory) and then end-product businesses (clothes factory, weapons manufacturer). The one problem the game has is that you can't actually build supply-side businesses, even if you happen to have demolished the previous supply business. It's needlessly restrictive when it doesn't need to be, especially with the freedom that the rest of the business offers you.

It's by far the best part of the game, looking for great opportunities to quickly increase your revenue. Is there a field nearby and there happens to be a farm in your city? You can make some quick money bringing in grain for the farm and also the city, should it be one of its demands. The demands of cities do change over time, depending on their size and how well linked they are. That's probably the best aspect of Railroad Corporation, the fact that your actions, your decision to supply a location with what it wants, naturally, allows it to develop faster.

In addition to this side of the business, there are other less important features. Honestly, most of them end up feeling tacked on, but they offer little benefits. Upgrade your headquarters with an HR department and you can hire people with multiple effects, from lowering your monthly costs or the price of tracks, to lowering the price of certain commodities. Furthermore, there's also one that lets you take out loans, using businesses you own as collateral. All fairly simple.

Another department lets you research upgrades for trains as well as new trains. As you work through the campaign, your research will be carried on through - apart from a certain moment where the game resets everything after what it considers the intro to the campaign. Frankly, the campaign isn't anything exciting, it's just worth playing through so you can unlock the maps to play in free-play.

The only real thing to add for the campaign is that there's also an overarching experience system. Complete side-objectives in the missions and you can get more experience, a certain side objective in each mission being to beat it within a certain number of days. This experience is then used to unlock further benefits, such as lowering the cost of tracks, increasing revenue from passengers and mail carts, reducing the monthly cost of buildings and so forth.

What else is there to say? Not much really. I suppose I could talk about the aesthetic quality Railroad Corporation, but all I'll be saying is "it's there". It's not an ugly game but it isn't exactly the same visual quality of Transport Fever 2. For that matter, due to the fact that it's gone for a more realistic look, it doesn't even look as good as Railway Empire.

I want to like Railroad Corporation. At times, I've genuinely found myself getting absorbed into it, trying to work out the best way to full a supply route and get what I need to fulfil the requirements. Other times, however, I've been frustrated, annoyed at the finicky and wonky track building, the inability to set up certain businesses and, of course, the all-too-rigid AI.

So do I recommend Railroad Corporation? Not really, no, unless you really like the style of game and know full-well the issues that seem to permeate the railroad games of late. Whether you'll get your money's worth depends on how much you are into the genre and the frustrations that come with it as well as your willingness to put up with the issues that the game has. Having left early access last month, I do think it could have done with a little more time to smooth out the edges. 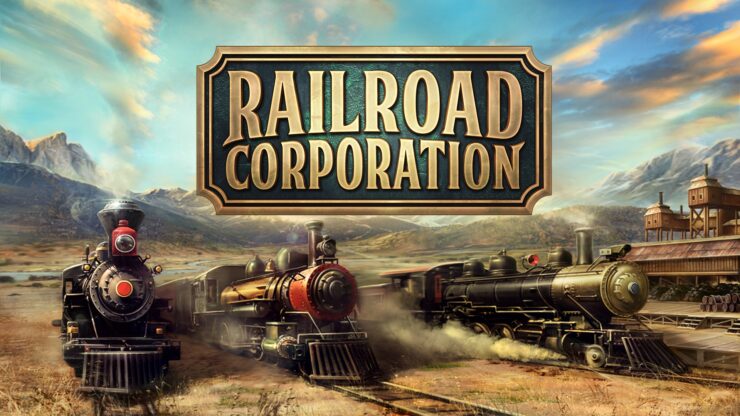 Railroad Corporation is a mixed bag, to be generous to the game. While it has certain strong points like the corporation building aspects, featuring a large variety of structures and businesses to supply and even own, as you utilise them to expand your corporation and develop the towns and cities around you. These cities react to your network of railways and businesses, creating the feeling of a living world. The problem, however, is that fundamental basics like even building your tracks is finicky at best, most of the time just annoying. Railroad Corporation can absorb you into it, it's certainly stole hours off of me, but the best I can say is that it's left early access too early and could certainly have done with a little more time.