I’d like to start this review by making a few corrections. The last time I played The King of Fighters was during the 2002 era (the NESTS Saga, for those who aren’t aware). Because of this, I wasn’t aware of many changes that subsequent KOF entries had brought to the table. For instance, I didn’t know that the auto combo system was implemented in KOF XIV.

I decided to revisit KOF XIV as part of the review process, and I noticed that Shun’ei was not a new character in this game, despite being the poster child. There are quite a lot of things that have changed between then and now. While I am a big fan of KOF, I have pretty much been stuck on the earlier entries, so any new face would be seen as some entirely new character.

With that out of the way, I have to say that The King of Fighters XV may be the best game in the series. This is a bold claim, I am aware. But I feel that many people need to give this entry a chance to see what I mean. It not only wraps up the entire story of multiple characters, but it also brings a lot of options that newcomers and veterans can get accustomed to. 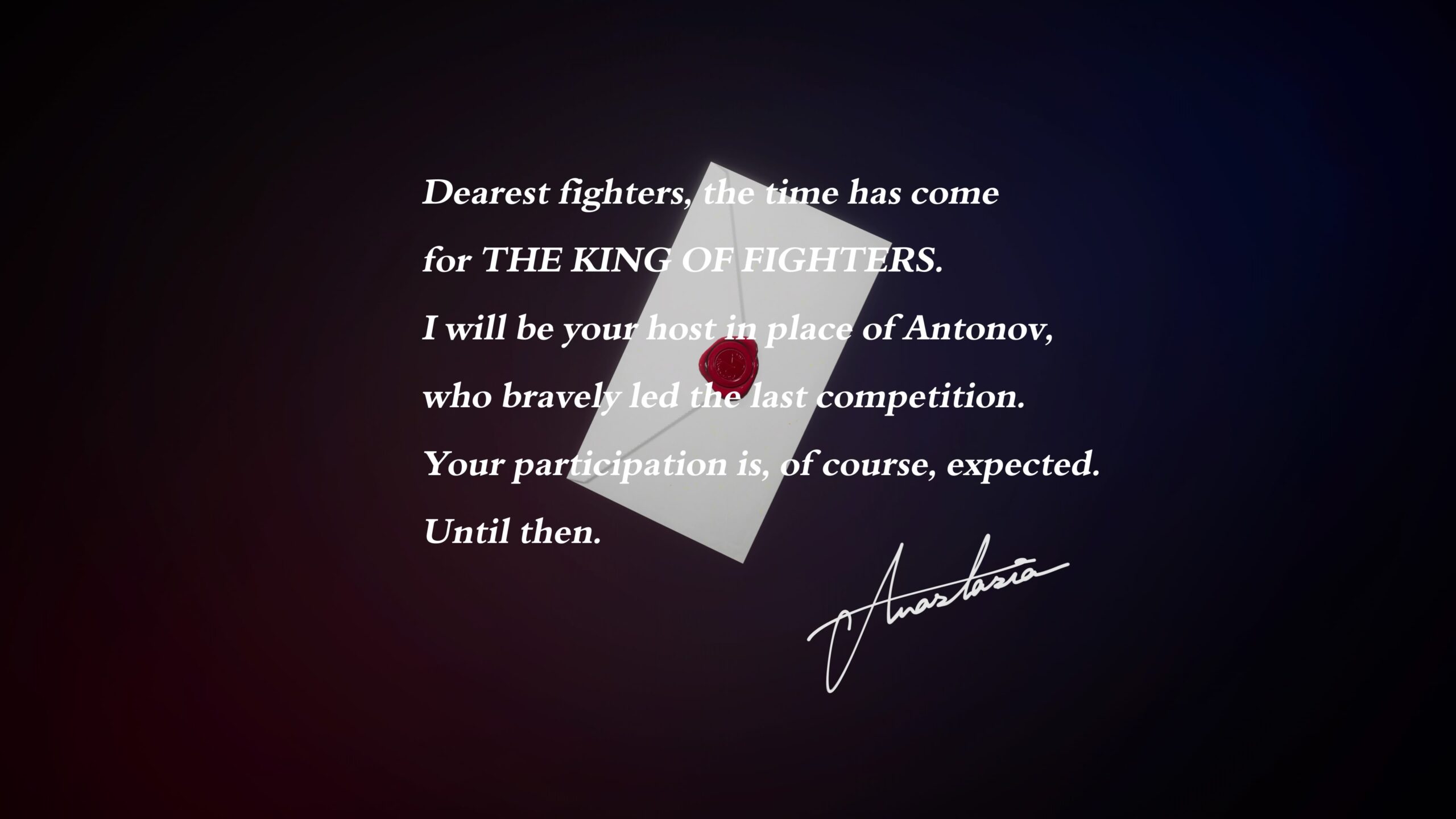 So, let’s start with the story. The story aims to wrap up each of the “sagas” KOF has had over the years. That means the Orochi Saga, NESTS Saga, and Ash Sagas will conclude in some way, shape, or form. We even finally find out what Krohnen is supposed to be. I won’t be spoiling that particular ending, but some might find the references during the conclusion to be satisfying.

The reason why the stories are intertwined once again is because of the KOF tournament. After the disaster that was the tournament from XIV, Antonov (who winds up playable here) received a huge blow to his pride (and probably a few broken ribs). Thus, he decided to enter early retirement. In his place comes a new tournament manager, who calls for the best fighters in the world once again.

The latest KOF tournament turns out to be a front (as it always is) for Heidern and company to figure out who’s been messing with the Orochi Seal, as it has been acting up. So, everyone is fighting in the tournament to either earn prize money or to bring balance to the universe for the 15th time (and no, that is not an exaggeration).

I can’t really go into details regarding the ending, per se, but I can say that the endings you get depend on the team you selected on the character select screen. Think of Story Mode as this game’s Arcade Mode; you fight a bunch of AI-controlled teams until you get to the final boss, punch it really hard, and then you get your ending.

I think the story, at the very least, is a good conclusion to each respective Saga. If SNK wants to start fresh in the next series entry, I won’t blame them (hopefully, it’s received better than the first Street Fighter III location tests). The King of Fighters XV’s approach for its story isn’t too formulaic. In addition, there are a few cool CGI cutscenes in between fights. 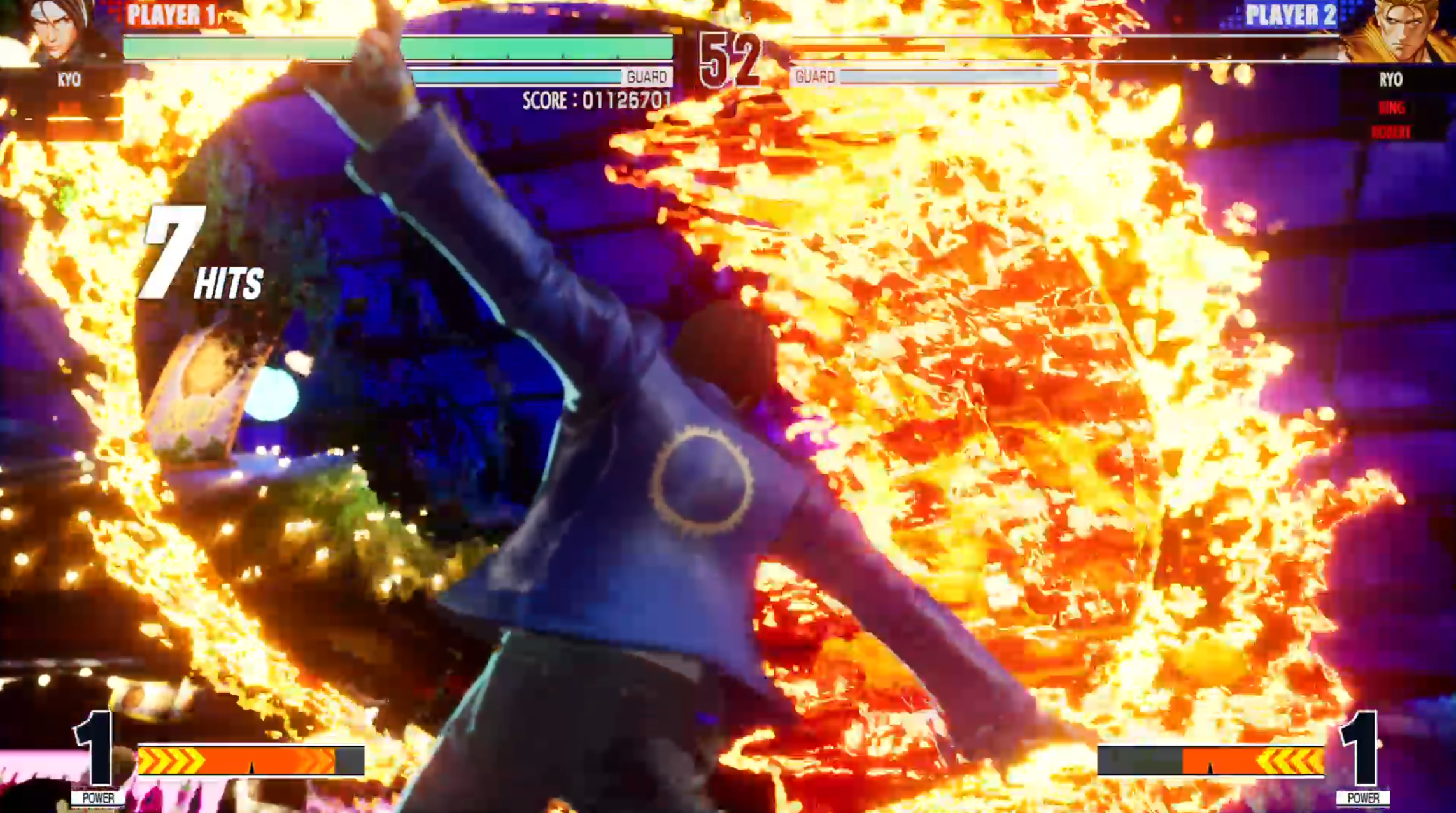 Moving on from the story, we get to the part that matters the most; the actual gameplay itself. The King of Fighters XV boasts a roster of 39 base game characters, 12 DLC fighters (six of which have been already shown), and a single Solo Entry.

Something to note is that if you were a fan of many of the newcomers from KOF XIV, you will not find them here. Instead, you’re going to find what I feel will be a love letter to the entirety of the franchise (but still no USA Sports team). If characters don’t appear as playable, they’ll make cameos during Story cutscenes.

But yeah, some characters (and in a couple of cases, entire teams) have been removed. Of the XIV newcomers, only six of about 20 newcomers managed to make it to this game. In their place are characters from past eras, such as Chizuru Kagura, who’s been missing since KOF XI, and Ash Crimson, the entire focus of the previous story Saga.

The control scheme mainly focuses on the four face buttons (and a taunt button depending on your controller). Each of these four buttons corresponds to either a punch button or kick button, and both categories have a Light and Heavy button. Command normals, such as K’ ’s iconic forward+LP normal, are in this game as well.

Most of the impressions I had from the KOF XV preview are still standing. For those who need a refresher, I said that even with the limitations of using simplified motion inputs, you still have room for diversity between each character. The game, overall, has become much more aggressive compared to XIV. This mainly comes in the form of MAX Mode being completely altered. 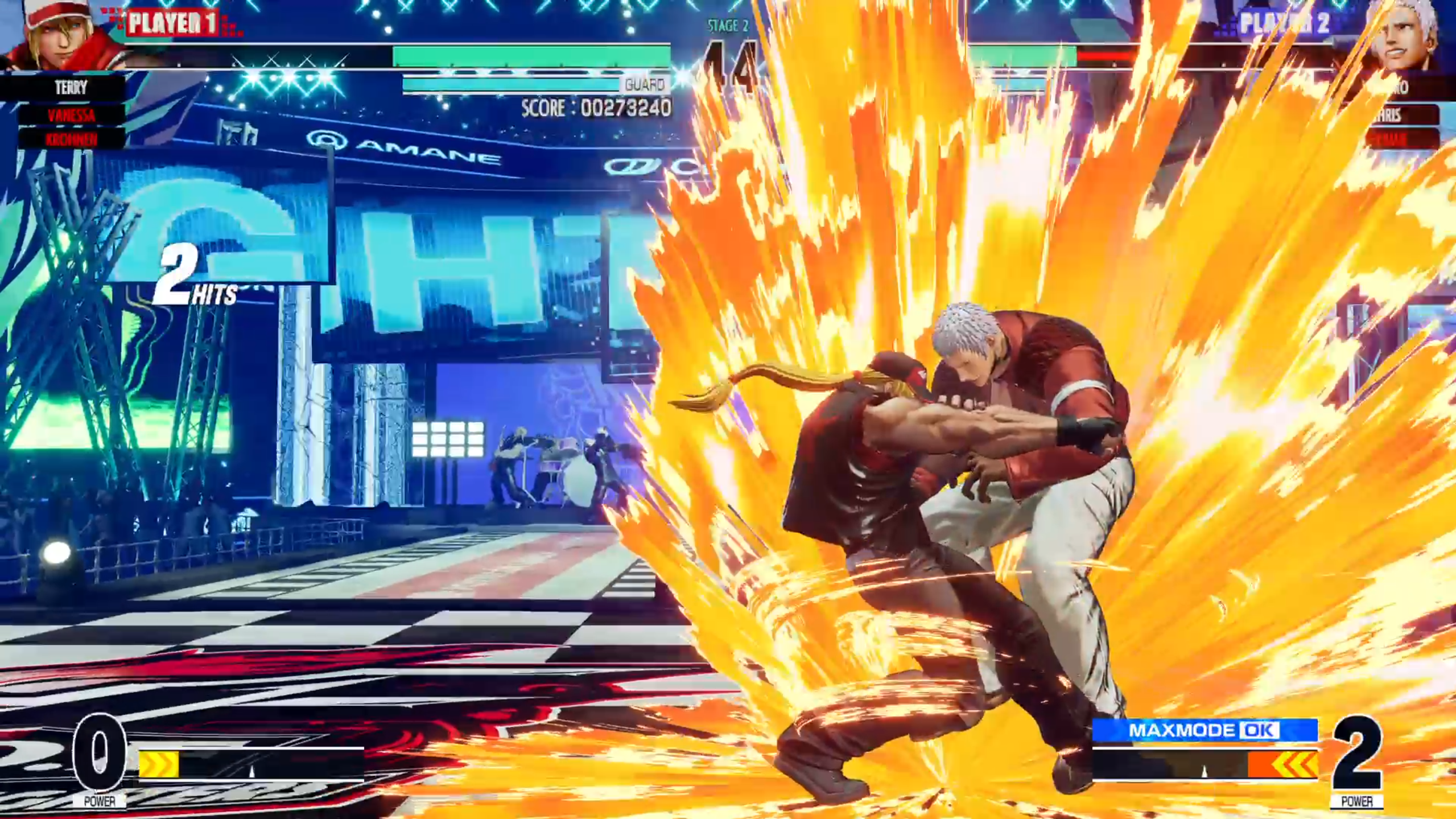 I was wrong regarding the fact that certain inputs would be ridden of. In fact, you can still find some complex motions like double half-circle and charged inputs. However, most of the characters that use them are pretty clear-cut. For example, you’ll find no charge inputs with a character like Vanessa while Ash is entirely built around them.

The King of Fighters XV still uses new motion variations that largely depend on the character you’re playing. And once again, meter management is essential for maximizing your offense, damage, and general gameplay overall.

The game focuses on making sure that you’re pretty self-conscious about your meter expenditure. This is seen with EX Moves, the brand-new Shatter Strike, and MAX/Quick Cancels. Fun fact; the MAX Mode’s Quick activation has a new slowdown effect attached to it, akin to Roman Cancels in Guilty Gear Strive or activating Instinct Mode in Killer Instinct.

Any encounter will most likely end in someone spending meter to maximize gains off of a single touch. Be it for corner carry, damage, or simply to kill (Dragon Ball FighterZ players will love that last bit). I still believe that the early stages of the game’s meta will revolve around the point and mid characters helping the anchor as much as possible.

However, because of how easy it is to gain meter, it is way easier to carry matches with just a point character, especially if said character can build enough meter to get multiple MAX Mode uses before they get K.O.’ed. I’m reasonably certain that there’s a touch of death (or ToD) combo for every character in the game, in some capacity. The community certainly didn’t have any issue finding these kinds of combos during the beta, that’s for sure.

The King of Fighters XV tackles accessibility for newcomers much better than other games in the genre do. So, in my opinion, they’ve made the idea of spamming auto combos much less appealing by having them spend meters with reckless abandon. However, I believe that they have done something akin to the simple special moves system from Granblue Fantasy Versus, where even pro players will resort to doing them every now and again. 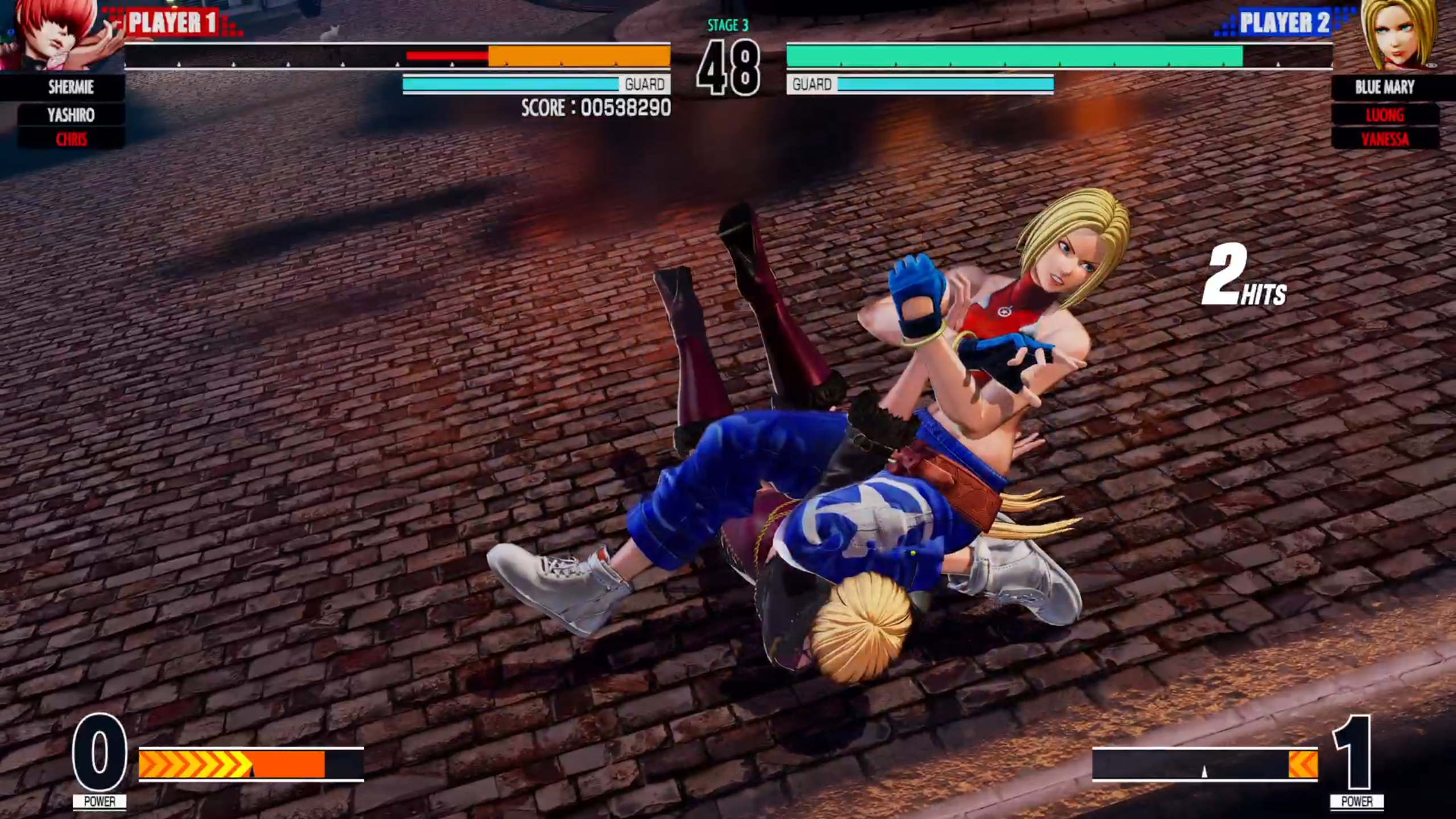 Let’s address the graphical quality and especially the music. The graphics quality has taken a MASSIVE upswing in comparison to KOF XIV. Characters look way better than before, and the game brings a more colorful palette to bring the characters to life. In all honesty, this is the kind of detail that XIV lacked as that game’s graphics looked quite muddled by comparison.

All of that musical power can be found at the DJ Station. Unfortunately, you have to unlock soundtracks by completing Story Mode with certain teams. That beats Guilty Gear Strive, though, where you have to rely on gacha to get music (which can, will, and does get tedious when pulling for specific songs).

The song selection goes beyond KOF and into the history of SNK itself. You can find songs from Metal Slug, Samurai Shodown, and other SNK titles to use as part of your environmental soundtracks. You bet that the first thing I did was unlock the Metal Slug soundtrack to listen to Judgment and Livin’ in the Deck.

The King of Fighters XV is also one of the games leading the charge with Rollback netcode implementation. I mentioned previously that the rollback needed some work, but I still believed that the netcode was great. Unfortunately, I couldn’t test whether or not the netcode has been improved as I wasn’t able to find any opponents over multiple searches.

However, I still believe that a good fighting game environment will need Rollback netcode to avoid problems with their inputs. This game (and the entire series, for that matter) is very precise with its inputs, so much so that it’s very easy to mess them up during a fight. It wouldn’t be fair if players had to worry about having their inputs eaten by delay-based netcode. 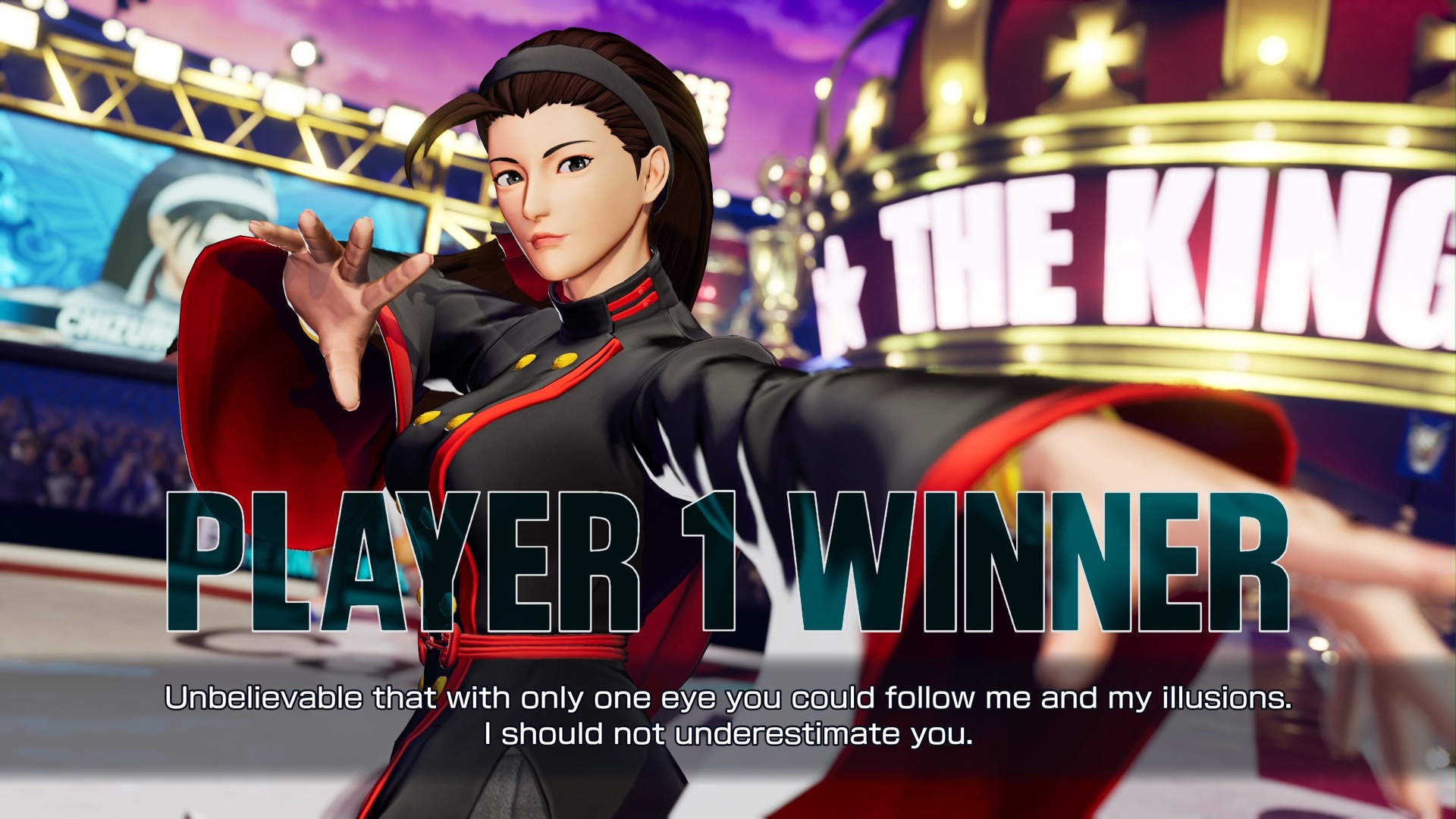 Overall, The King of Fighters XV is the excellent love letter to the franchise we all needed. It brings a perfect mixture of the best of every Saga while having a more celebratory feel all around. The experience offers everything in a straightforward fashion, and even the Story Mode feels great to play and a great way to learn new characters.

Some players might be alienated by the more varied motion inputs you need to do. I mean, some players certainly struggle to input a DP. However, I feel like newer players can still find characters that can be easy to use and tough to master, so they’ll still have some incentive to become better and eventually learn other fighting games.

The game’s visual design is stellar. The way it brings back memories of various franchises, not just through the music but also through other easter eggs and references in the background of certain stages, is just phenomenal.

It makes me feel like I never left KOF behind, to begin with. I am ready to start my journey in fighting games once again and live to fight another day.