Outriders from People Can Fly (Painkiller, Bulletstorm) is the latest in a long line of 'looter-shooter' games, a new breed that was arguably spearheaded by Bungie with Destiny.

Mixing the thrill of a shooter with some roleplaying elements, notably an extensive loot system, these games aim to deliver an experience that leads players to keep playing as they attempt to increase their character's powers.

Outriders is no different in that regard. After the brief tutorial, you'll have to pick one of four classes: the Devastator, the Pyromancer, the Technomancer, and the Trickster. People Can Fly did a great job with the classes, that's for sure. They're all unique enough to be appealing, focusing on different powers and play styles. Additionally, players can choose three active skills among a total of eight available to each of the classes.

As with most RPGs, you'll get three different specialization trees with each class where skill points can be spent. Ideally, this should be done in accord with the active skills picked and with the equipment your character is carrying. Both active skills and passive specialization bonuses can be swapped at will without the usual costs or limitations that most roleplaying games put in place. This allows for continuous experimentation of new builds and quick adaptation to the specific enemies faced in a specific situation.

That's just the tip of the iceberg, though. While you cannot craft new weapons or armor in Outriders, it is possible to use the resources gathered to upgrade your existing items in very meaningful ways. You may level up specific attributes of the item, you may level up its rarity (up to Epic), you may increase its level, you may swap the variant (only available for weapons, where you can change an assault rifle from burst rifle mode to full auto, for instance), and most importantly you can tweak mods. The mod system offers significant variety, introducing many modifiers to the class skills and to various status effects such as freezing, burning, bleeding, and many more.

It is important to note that only one mod slot can be replaced in any given item, which forces players to look for a piece of armor or weapon that already have at least one mod suitable for the desired build. Overall, it's a really deep system for a looter-shooter game and one that's instrumental to making a character's build really your own in Outriders.

However, it is ultimately betrayed by the endgame itself. After you've beaten the game's campaign, you'll be introduced to the so-called Expeditions. These high-end missions are entirely time-based at the moment, which means that you won't really get loot directly from enemies as you usually do in the game. Instead, everything is provided at the very end of the Expedition, and to improve your chance at getting better loot (particularly Legendary items) you need to complete it within a specific time set by the developers as that mission's Gold Tier. This pushes players into just rushing to the end as quickly as possible, instead of tactically approaching foes.

Furthermore, the game's lack of anything resembling the Trinity of roles (Tank, Damage, Support) diminishes the need for any real teamwork and funnels everyone into dealing as much damage as possible, even those classes that on paper could act as tank or support, such as Devastators and Technomancers. As a whole, the experience is a far cry from more satisfying endgame content types, such as dungeons and raids, seen in other games. Of course, the developers could change this in the future, but they've always said the game won't be a live service, so it could take a while before a meaningful expansion or DLC comes out to deliver a better endgame experience.

The story of Outriders isn't an afterthought, despite what one may think. Its premise is similar to that already seen in The Outer Worlds: with Earth on the brink of becoming unlivable, a colony ship called Flores is built to reach the supposed paradise planet of Enoch after a journey of many decades, while its people are frozen in cryostasis.

Upon landing on Enoch, though, the Outriders (whose job is to blaze a trail through Enoch for the rest of the population) encounter an energy storm that kills many and leaves even the player character's almost mortally wounded, after which he or she is put back into cryostasis.

The main character is woken up by accident some thirty years later and finds out that what's left of mankind is entrenched in a decades-long war between insurgents and the Enoch Colonization Authority, while the continuous storms (collectively called Anomaly) have mutated the world into something much more dangerous. Thankfully, the player character, one of the last remaining Outriders, was also Altered by having come in contact with the Anomaly and now exhibits superhuman powers according to the class of choice.

The Outrider is tasked with breaking through the warzone and finding the source of a signal coming from beyond the Anomaly, with the hope that it could be a safe haven for all of mankind. Of course, things are actually much more complicated than that.

Granted, Outriders does not feature a groundbreaking plot in any way, but it is narrated well and it does have a decent amount of twists and, most importantly, a few enjoyable characters. There are also tons of additional lore tidbits that can be unlocked and subsequently read in the game's version of a codex, for those who are into learning everything there is to know about a fictional universe.

Let's get to the shooter part of the game. The developers at People Can Fly have a notable pedigree with shooters, including the original PC port of Gears of War and the development of Gears of War: Judgment in collaboration with Epic Games. Indeed, it would be easy at first to mistake Outriders as a spiritual successor to the game that defined the 'cover shooter' subgenre. The first few hours all offer plenty of opportunities to get your character into cover, but you shouldn't actually do that unless absolutely necessary.

Outriders isn't meant to be played behind cover at all. In fact, most classes only regenerate health after killing an enemy, so you can't just bounce from cover to cover and wait for the health to fully regenerate as you would in Gears. Moreover, the Devastator class only recharges health when the kills occur in close range, requiring players to be in the thick of the action at almost all times.

Something noteworthy is that characters can only ever enter cover when fighting against other humans or humanoids. During the many Outriders missions where you'll fight creatures, this won't work even when there's a. This is certainly a conscious choice from the studio which may have to do with the different AI behaviour of the creatures, who tend to try to overwhelm the players without any tactical considerations.

Overall, the action component of Outriders is a resounding success. Whether you're unloading a shotgun or unleashing your class powers, the game makes you feel powerful while delivering plenty of challenge (as long as you are playing on an appropriate World Tier, of course).

Where the game sticks disappointingly close to Gears is, sadly, in the world's structure. Not only isn't Outriders an open world, most of the time it's so linear to be reminiscent of games from generations past, which were limited by the technology available at the time.

There is no true sense of exploration here, which is all the more underwhelming as you're supposed to be an Outrider, an explorer tasked with blazing trails throughout the alien planet of Enoch for all of mankind. Most of the time you'll actually be going through tunnel-like maps, moving from fight to fight, with only the occasional tease of a scenery backdrop that you won't be able to get to. The maps admittedly open up a bit in the latter part of the campaign, but not nearly enough to really change the overall impression.

As if that wasn't enough, even these small maps are further segmented through mindboggling means. Countless times you'll encounter a brief cutscene of a few seconds where your character opens a door, moves a tree, jumps over a short gap. Needless to say, this is done to hide loading the next part of the map, but it shouldn't be needed in a 2021 game at all. Technology has made gigantic leaps from the days of the Resident Evil doors, thankfully, but Outriders for some reason brings back these archaic tricks that only excel at one thing: stifling immersion.

The visuals are pretty enough, but nothing mindblowing for an Unreal Engine 4 game made with triple-A production values. There are no fancy ray tracing effects to be found here and even support for High Dynamic Range displays is currently borked on all platforms: for some reason, activating HDR in Outriders leads to vastly oversaturated colors. The developers, busy as they are on fixing far more pressing issues, haven't acknowledged the problem yet.

Performance is a bit of a sore spot, too. Between the small maps and the less than impressive graphics, you'd think there would be no problems. Indeed, GeForce RTX owners can even activate NVIDIA's Deep Learning Super-Sampling, which grants a sizable performance boost when playing at 4K resolution. The issue is, however, in the rather inexplicable and very annoying stuttering that plagues Outriders.

This is most evident when first loading a new map but it also occurs when you are playing on maps you've already encountered. The very first patch released by People Can Fly was supposed to fix this on both DirectX 11 and DirectX 12, but it didn't. Hopefully, the developers will be able to get back to it once they've got some breathing room with the other issues.

As Outriders is an online-only game, it's worth discussing the network infrastructure as well. Not only will you need to be online to play even while solo (which made the game inaccessible when the servers were down), Outriders uses peer-to-peer networking instead of dedicated servers.

The bigger problem is that matchmaking can be a terrible experience because of this. It's all fine if you're playing with someone you know who lives at least in the same country, but the random matchmaking doesn't seem to take into account ping as the primary criterion. As a result, it is not uncommon to join a session that is borderline unplayable due to latency.

Oh, by the way, there is no text or voice chat in Outriders. There are only emotes, for all the good that would do if you wanted to communicate with a newly encountered player. 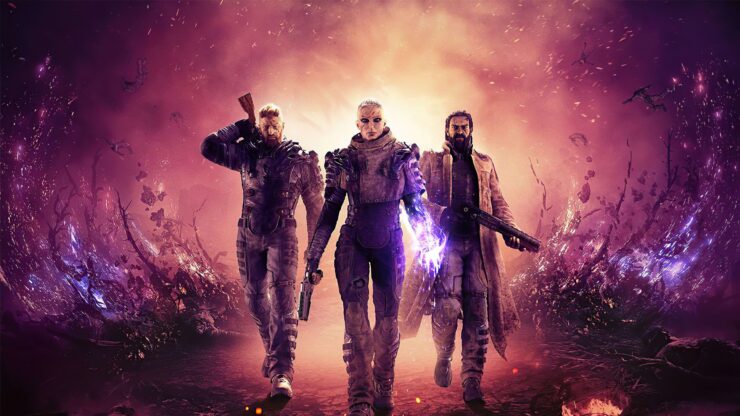 Outriders is a fun looter-shooter game where both the action and RPG parts of the formula are exceedingly well done. It does falter at the endgame, though, and it comes with a myriad of technical issues, not to mention an antiquated world structure; bear all of that in mind if you're looking to purchase at full price.