If my preview of the Persona 3 & 5 Dancing titles didn't give it away, I'm not exactly good at rhythm games. I panic when things start going against me. The only way to keep me around is through one of three things. Either be user-friendly enough for me to play, have a great soundtrack or be shiny and pretty enough that I'm just stuck watching the screen like an entranced magpie. Old School Musical had managed one of the three, certainly coming close with another one.

That would be the first two if it wasn't clear by looking at the screenshots. It's not that Old School Musical is a bad looking game, it isn't. What it is, though, is a tour through gaming history using both an old-school art style, inspired by the classics, and a soundtrack full to the brim with an excellent chiptune soundtrack. Indeed, the soundtrack is by far the best and most consistent part of the game. It's certainly something you can see developers La Moutarde have put their effort into.

What it helps to do push forward the gameplay. Naturally so, as a good rhythm game needs good music to work with. Old School Musical has a host of addictive tracks that the game has been matched to the button pressing perfectly. I can't imagine how painstaking it would have been, making sure every button press and hold matched the music and still worked with the previous and coming buttons. At least that's how it is 99% of the time, with odd occasions where the game will throw in button prompts seemingly just to check if you're still awake.

The advantage I find is that you're not aiming for some sort of high score. You have a health bar, each note you miss will reduce it and hitting them, in turn, raises it, particularly so if you get a good chain built up. The aim is simply to keep yourself alive to reach the end of the stage. Fortunately for me, Old School Musical isn't the most challenging of titles. At least that's the case in normal mode.

I'm not going to say that I haven't found myself losing, because I've seen the game over screen a good few times, with the game then asking me if I want to play a level on easy. The problem with easy is that it is just that, easy. Too easy really, where even somebody like me who's not good at rhythm games can do it with their eyes closed. Not that I did, I only played on easy mode for certain levels just to watch the level unfold behind the button indications. Normal offers the best balance for playing the game, but you've no chance to take in the events behind the scene.

I wouldn't argue that you're missing out, at least not all the time. Sometimes the game can be exceptionally well done, watching MegaTib - the two protagonists are Tib and Rob, brothers on a mission to save the world - run around shooting the enemies in a Megaman style level. I won't lie, sometimes I wish I was the one playing the game shown in the background. Sadly, with the huge variety of games that are covered in Old School Musical, that would be impossible.

Sometimes I genuinely found the game funny and endearing. Rob is a complete and utter numpty and his mishaps, such as randomly killing a chicken in the first of the Zelda-themed levels, can be what propels the story forward. At the same time, his idiocy and doing what no sane person would also do helps move the story on. The game certainly made me laugh, even with the most innocent and random of things like in the Teenage Mutant Ninja Turtles stage in the first of the screenshots in this article.

At the same time, I often found myself cringing with some gags that just fell flat. You find too many random insults hurled between the brothers, with most simply being thrown in as a reference to the game that is being parodied. Of course, the game couldn't help but throw in random memes - again, for the sake of it. Arrow to the knee was funny once, maybe, now it's just forced.

Other things, like a take on the somewhat underdressed Cindy from Final Fantasy XV, make me wonder exactly what reaction La Moutarde was looking for. Naturally, in a stage that mimics the original Metal Gear game, you were always going to find a running joke about Quiet - I did find amusing, although it's not exactly retro. That tends to be the issue, it got to the point where it seemed things were thrown in just for the sake of it. Just so the game could go "Look, I know about [insert game here] too!".

Of course, one issue with humour is that it's very subjective, though I don't think there'll be anything that'll offend here. Sometimes it will just fall flat. Something I have to say the story almost permanently does. I'd actually say that seeing all the references and testing yourself, see if you can recognise them all, is the most enjoyable part of the game. The story, simply put, have you raised as the heroes of prophecy, as in traditional game fare. Your job is to stop the glitches that are destroying each and every world.

It's all framed in a good-looking, old-school, game. Sadly it's one you can't truly enjoy unless you're playing on easy. As I said earlier, it's too easy to miss out on the action being shown in the background since you're focusing on the buttons flying at you thick and fast. Were I able to enjoy it as much as when playing on easy, Old School Musical would have got me on point number three. It would have been able to entrance me like the aforementioned Magpie. It's impressive to actually know and sometimes see just how much hard work has gone into the game and presentation.

The one thing I can't speak of is the multiplayer mode. I haven't actually tried it because I am - naturally - a misanthropic git. I can imagine it would work and be pretty fun, but also infuriating if it relies on everybody hitting the right note. I wouldn't want to be held back by somebody who starts spiralling when they hit a wrong note and suddenly costs the rest of the team, leading to the level being lost. Okay, maybe it's that I don't want people to mock me because I'm bad at rhythm.

Old School Musical is a fun and enjoyable game and I've spent more than enough time on it over the past week, an absolute perfect title for on-the-go gaming with your Switch too (wear a headset). One of the best soundtracks I've heard from a smaller title in a very long time, particularly so if you like that sound of music. If you've grown up on the games that Old School Musical lovingly mimics, I already know you do. Sure, some of the humour falls flat and other times it can feel very forced, but it's a slight blemish in what is otherwise a good game that's more than worth your time. 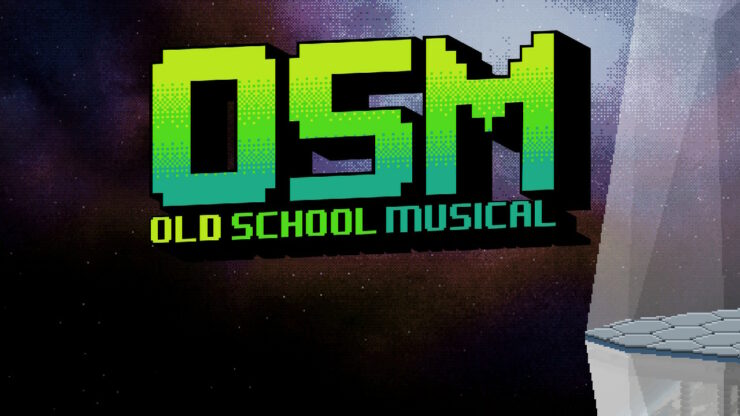 Old School Musical is a fun and engaging rhythm game that offers a great throwback to a host of retro titles. As well as looking great (when you can watch the background!), the soundtrack is one of the best you'll have heard from such a small developer in a long time - featuring 50 original chiptunes tracks that will inevitably remind you of other titles. A perfect game for on-the-go gaming on the Nintendo Switch and still enjoyable to simply sit down with, the only problem being that some of the comedy can feel too forced, random or just fall flat. Still a title that's more than worth your time.