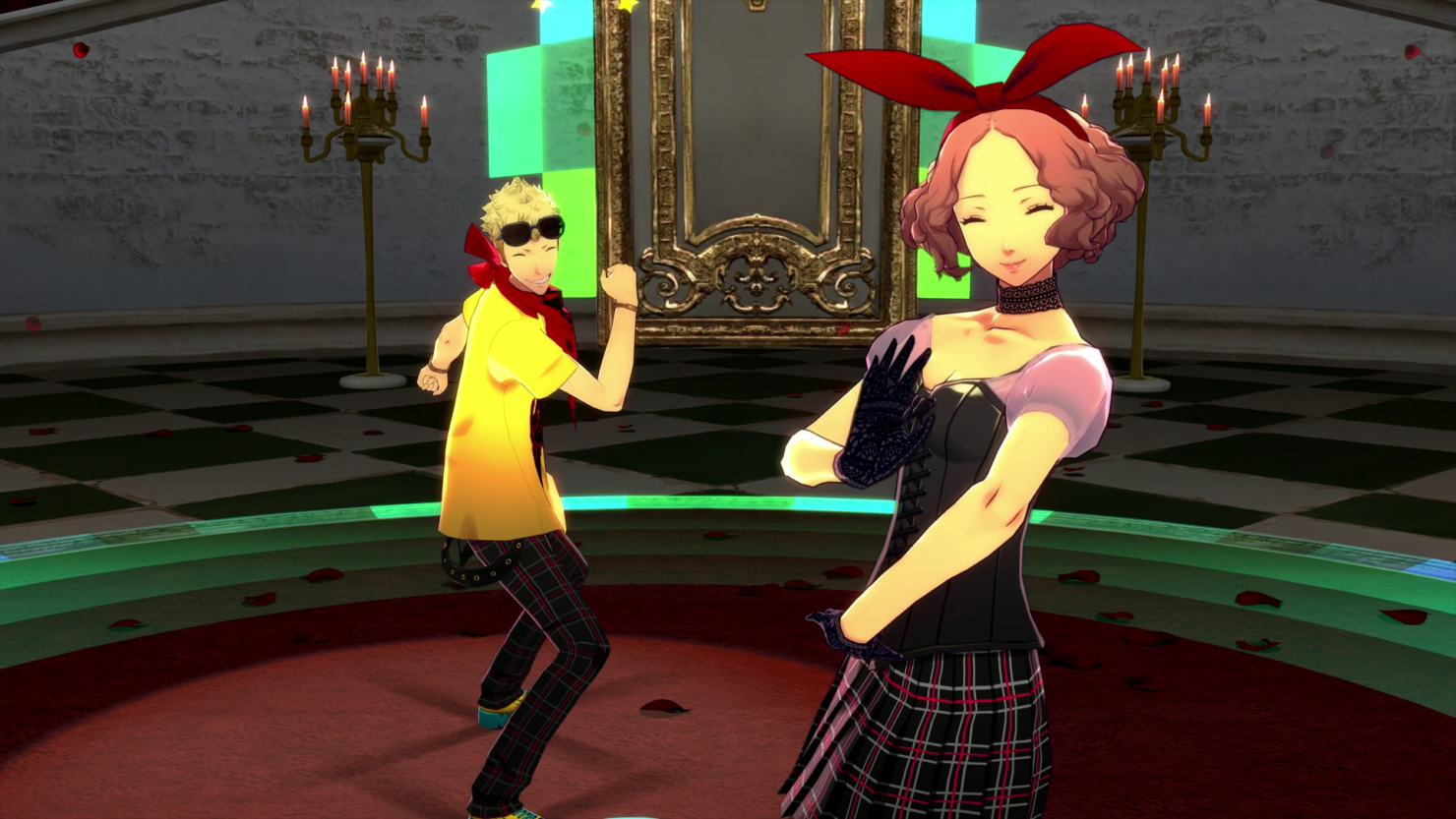 The Persona games are some of the finest examples of RPG's around today, there's little doubting that.  The move with Persona 4: Dancing All Night, to a rhythm game took me by surprise. I couldn't see how it would work out, though it did. It was a success for Atlus and the aim following that was to make improvements to the formula and capitalise on this success. Naturally, Persona 3: Dancing In Moonlight & Persona 5: Dancing in Starlight were announced.

I have to admit that I'm pretty damn abysmal at Rhythm games.  That doesn't mean I can't find them enjoyable though. Rocking along to Guitar Hero or Rock Band used to be a personal favourite of mine - at least when I was a bit younger and thought it was pretty cool. Now, my rhythm games tend to be mini-games in much larger titles (Yakuza Kiwami 2's Karaoke, for example).

I recently had the opportunity to play both titles at SEGA's offices. Playing them highlighted just how much of a novice I am at the genre - though I could just jump back onto Dancing All Night to re-teach me that fact. With both titles to be released in December, this is an early look at both titles. The only question, then, is what did I think so far? 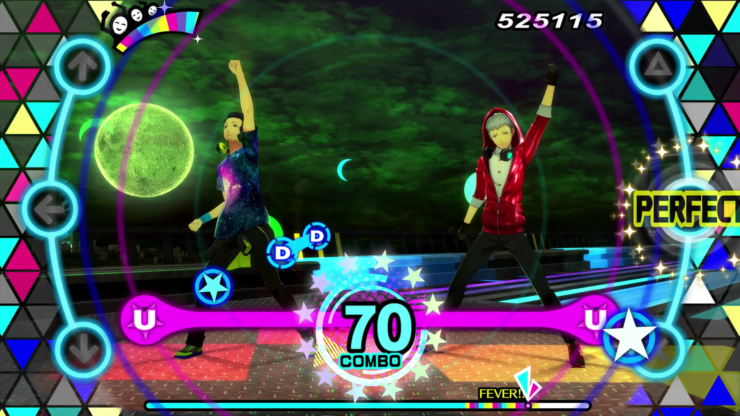 These scenes like this play out much like a visual novel. The scene is set and the characters will pop up and talk to each other. You are able to make choices, as the dialogue appears to branch out. Whether this will affect the relationships between the characters is something I genuinely don't know at this point. It wouldn't be a stretch to imagine this, as one aspect of the title has you dancing as a pair.

Actual gameplay elements are much as you would expect from a rhythm game, though quickly become more complicated. Naturally, you press the corresponding button as the marker reaches the edge of the screen. This could be Triangle, Circle, Cross, Up, Left or Down - at least it saves some movement of your thumbs. Some of these notes, however, you have to hold for a specific amount of time, shown by a longer green bar. Or, you may have to quickly double tap the button.

That's not all. This is where it truly starts getting complicated. Unison has you pressing two buttons at precisely the same time, at the right time. Fortunately, they seem to always match, as to not fry my brain completely. Throw them all in together, at a quicker pace, and suddenly what seemed like a fairly easy going track is throwing more at you than you could imagine. Timing is, of course, key. If you time it perfect, your score will shoot up. Miss too many and you can, and will, fail the track. 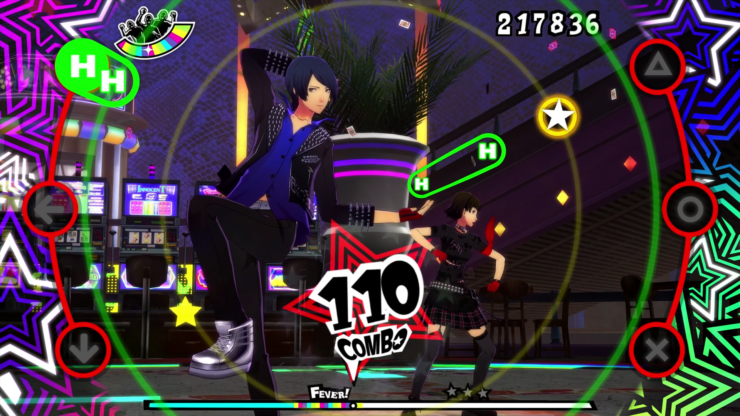 Fortunately, there is one thing you can happily miss without failing the track - scratches. As a ring approaches the external ring, flicking your analogue stick can help to provide a much-wanted boost to your score. Do good enough you'll jump into Fever mode, helping to truly rack up your score and keep the audience happy. Of course the busier it gets on the screen, the more flashy dancing you see. Sometimes with a whole host of characters on the screen. It's both complicated and beautiful.

As is instantly visible from the screenshots here, Persona 3: Dancing in Moonlight and Persona 5: Dancing in Starlight as both incredibly bright, colourful and vibrant. Indeed, for me, the screen could get just a little too busy, with flashes, lines, stars, scratches and more all sending my senses into overdrive. As negative as that may read, it isn't really a complaint. My first one or two attempts at any song ended in failure, I'm man enough to admit that. However, once I got into the swing of things, it all fell into place.

Adding to the busy visuals are some simply fantastic character models with brilliant outfit options. I'm honestly not normally one for games that offer outfit changes as any sort of key feature, but it's so undeniably fitting in a game that is all about dancing. Part and parcel of getting on the dance floor and showing your dancing is also flaunting your own style.

Of course, a rhythm game also has to rely on one key feature, the music. One of the biggest issues you could find in the later Guitar Hero and Rock Band games were a limited number of tracks that actually made use of the whole premise of the game. Fortunately, these titles have no such restrictions. Through the use of some splendid tracks, the game never loses that ability to suck you in. Fortunately for me, some tracks are slow enough for me to gain a bit of confidence for the faster ones, which lead right back into my senses going into overdrive. 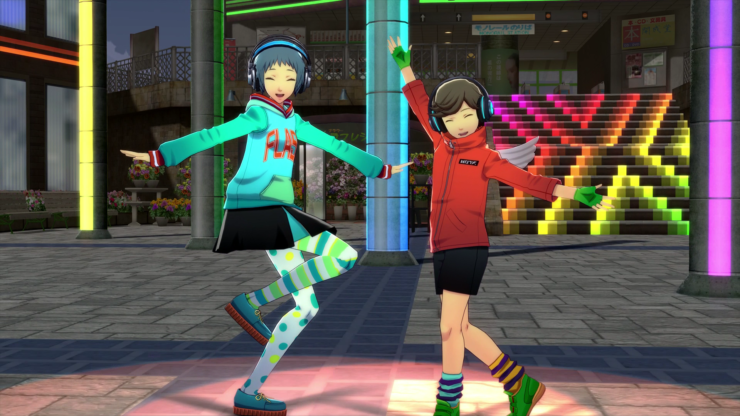 I was only able to have a limited time with my hands-on of either title so I certainly don't know everything to be found within the game, nor do I completely know how the interactions will impact the game - if at all. What I do know is that the rhythm aspect of the game, the core gameplay, has been polished to the best level it possibly could be. Add onto this an insanely compelling soundtrack and you have the making for at least one must-buy title - maybe two if you feel like it.