BPM: Bullets Per Minute, coming right from the FTL: Faster Than Light naming-school, is a game that brings to mind the great poem "The German Guns". There's a hell of a lot of "BOOM" and each of them follows on in a specific beat. Why? I assume it's because the Norse gods have gotten into heavy metal recently and are determined to make you match to the beat.

Introducing BPM: Bullets Per Minute, the pay system that the NRA is no doubt desperate to implement in the US. If you were to liken this to another game, it'd be a mashup between The Binding of Isaac, Painkiller, and Guitar Hero. If the sound of that mixture intrigues you, this is something you're certainly going to be interested in and I wouldn't blame you either.

So what exactly is BPM: Bullets Per Minute about? Well, it's about shooting things. Yeah, that's it. Honestly, the story isn't even paper-thin, It fits on the piece of paper you find in a fortune cookie. You can find the whole story on the Steam page if you like, and it reads as follows: "Fight as a mighty Valkyrie to repel the forces of the underworld from invading the world of Asgard". But let's face it, you don't go into DOOM for the story, nor do you go into The Binding of Isaac or Guitar Hero for their stories either, though you certainly should for Isaac, because that's brilliant.

Anyway, yes, there is no real story. There doesn't need to be either because this is a roguelike, you pick up the guns and you shoot. I can't even say that the whole Norse mythology setting has any point beyond lending names to the stages and the bosses you face. Last I checked, the Valkyries of Norse mythology selected those who will die in battle and then bring a selected half to Valhalla, the warriors becoming one of the einherjar, preparing for Ragnarok. Not that I have a problem with the depiction of a Valkyrie fighting, I'm all for it, this just feels more Marvel than anything else.

Monsters are invading Asgard, you are sent to kill them. You can be one of the five valkyries made available within the game, each having unique stats and starting weapons. The first, Göll, has 100 health and dual pistols; Freyr has 150 armour, no health and a revolver; Hildr comes with just 50 health, 25 armour, a sort of pistol and a key (more on these later); Njord has 50 health, can use magical blasts and starts with seven coins. You may notice I've only listed four characters, that's because the last character, Odr, is locked behind the task of defeating Nidhogg, the final boss, on hard difficulty. I would do this, but I can't.

Now, I don't mean this in a flippant "the game is impossible" sort of way. Like all roguelikes, a lot of BPM: Bullets Per Minute is down to luck. That chest you're opening after clearing the room, will it contain some more coins or a much-needed health potion? If you've got some coins stocked up, will the strange fat Chocobo that runs a store be selling something useful to you? Or, if you head to the blacksmith, will the metal Chocobo be selling the rocket launcher? If so, congratulations, you have got that much closer to winning the game.

As I've already stated, BPM: Bullets Per Minute wants you to shoot in time with the beat. Actually, it wants you to do everything in time with the beat. Shooting, reloading, jumping and dashing. The only thing that doesn't have to be in-time, is running around. It heartily recommends a lot of running, jumping and dashing to avoid the massive numbers of enemies that can appear in some of the rooms. Strangely, I did (eventually and for the most part) get the hang of this system, eventually completing the game on easy mode after an eleven loss-streak. Yes, the game keeps track of your win and loss streaks with each character.

Other aspects are carried over too. I've already told you about the fat and metal Chocobo-like creatures. They aren't the only special rooms you can find as you're venturing through the different levels, of which there are seven per game, increasing in size as you advance. So, the special rooms. You have a library, unlocked with a key, and you can either find a special ability that ties to the RMB, which is carried over, and there is also a bank where you can stash your gold coins for future runs.

It is worth noting that as you spend more gold at the two shops, you unlock more and more items to buy. At the very start, you're going to find that you're not loyal enough to buy the better items from the shops, with better items appearing after you've spent more at the stores to increase your loyalty ranking. There are also mini-boss rooms as well as arena-rooms, letting you face up to three waves of enemies for a reward after each wave. Of course, the rooms are randomised.

As you're running through the different levels, the difficulty naturally increases. Even without entering hard difficulty, you're going to find things a challenge as you run into massive swarms of creatures. There are ways to make this easier. You can find ways to improve your stats throughout the levels, such as donating a gold coin to an alter, to other pickups that you'll find along the way. The easiest way to make it easier, however, is simply going into the settings and turning on auto-rhythm.

BPM: Bullets Per Minute can be a little too difficult for its own good. Playing it even with rhythm detection to loose can see you missing a fair few shots, jumps, dashes, and reloads. Granted, that's just due to the nature of the game and keeping with the beat. It does have some accessibility options, such as auto-rhythm, which I just mentioned. Here, you no longer need to keep to the beat of the game, the beat of the game keeps with you. The downside is that even if you shoot in time with the beats, there's no score multiplier.

As well as the difficulty, I do have a few other small complaints. There isn't a great deal of variety when it comes to bosses and later on, a lot of the enemies feel very much like their skill-sets are copy-pasted from earlier ones, the game even using the tactic of throwing in weaker versions of older bosses as regular enemies. The levels are also quite repetitive, the sad nature of most roguelikes.

No matter my complaints, I'm honestly having fun with BPM: Bullets Per Minute. It offers a decent amount of replay value if you're wanting to see what your most over-powered build could be and explore all of the items. I'd still love to know what some of them do though, the game is very cryptic with some of them. It's especially good if you're wanting to challenge yourself and see how high of a score you can get. There are also five separate challenge modes that, like the characters, are unlocked as you progress through the core mode. One such challenge is retro mode, certainly entertaining in a throwback style although a little too retro-looking for me.

Do Awe Interactive and BPM: Bullets Per Minute deserve to be able to afford the chance to make more challenge modes? Yeah, I think they do. What's a little annoying is, at the time of writing this review, I don't know the launch price of the game. If it costs £25, I'd say it lands a little short of justifying the cost. Anything under £20, yeah, that sounds about right. BPM: Bullets Per Minute is a fun-playing, fast-paced, decent-looking, and great sounding shooter. 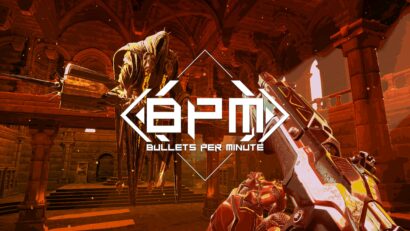 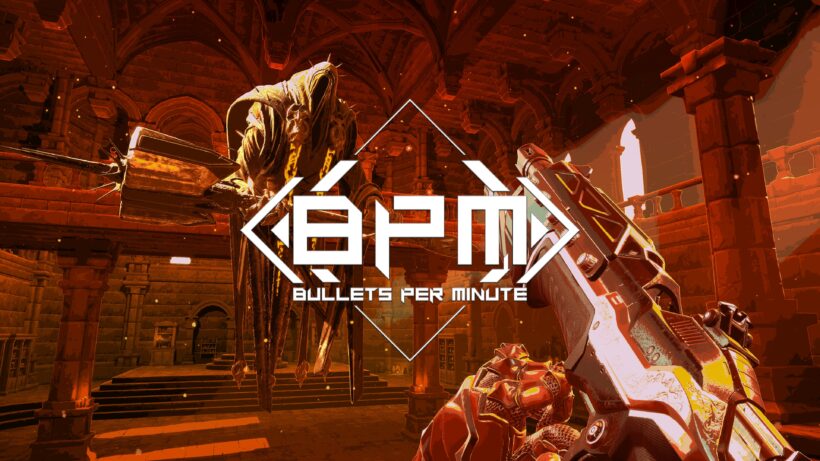 BPM: Bullets Per Minute is an old-school shooter with a twist, adding in roguelike mechanics as well as rhythm-based gameplay. Jump, dash, shoot and reload to the beat to advance through a host of monster-filled levels, collecting keys, coins, equipment, and stats to try and get through the seven stages that constitute each playthrough. The gameplay is fun, fast, and frantic, it looks good and sounds great, with a perfect heavy-metal soundtrack, though there are a few flaws. A lack of enemy variety, particularly bosses, as well as level variety starts to show quickly.