While the GeForce RTX 20 series was generally well-received in the tech industry, the launch didn't go without a few issues. The first and foremost problem with the new cards was the heavily taxing RTX feature and a few key titles that supported it. Since the technology was new, it needed time to deliver results and it felt kind of rushed on NVIDIA's part. The second was the pricing with each tier getting a bump in price over its predecessor.

But all of that has now changed! In less than a year, NVIDIA is now bringing forth their new RTX SUPER lineup. Think of it as the original Turing lineup but supercharged with better performance & more sensible prices. The lineup includes three cards, the GeForce RTX 2080 SUPER, GeForce RTX 2070 SUPER, and GeForce RTX 2060 SUPER. Termed in our original review as what Turing should've been in the first place, the GeForce RTX SUPER is to bring more gamers over the RTX bandwagon.

What happens to the existing cards? The NVIDIA GeForce RTX 2080 and GeForce RTX 2070 are entirely replaced by their SUPER equivalents so NVIDIA and their AIBs will no longer be making more of those. There might be heavy promotions and discounts on the existing stock to clear up inventory. As for the RTX 2060, it would exist because of the $349 US price point which makes it the perfect step up to RTX performance and featureset in this category. All cards below that fall in the GTX 16 series portfolio which offer the Turing architecture but exclude RTX features. Following is what the latest pricing chart for the NVIDIA GeForce lineup looks like.

In addition to the specs/price update, NVIDIA's RTX technologies are being widely adopted by major game engines and APIs such as Microsoft DirectX (DXR), Vulkan, Unreal Engine, Unity and Frostbite. While there were only three RTX titles around at the launch of the RTX 20 series cards, NVIDIA claims that they have at least 13 new titles coming soon which will utilize their RTX featureset to offer real-time ray tracing. These titles include the hugely anticipated Cyberpunk 2077, DOOM Eternal, Call of Duty Modern Warfare, Watch Dogs Legion, Wolfenstein Youngblood, and Vampire: The Masquerade - Bloodlines 2. In addition to that, with the upcoming consoles confirmed to feature ray tracing, developers can also make use of the RTX technology to fine-tune future games for the GeForce RTX hardware.

So for this review, I will be taking a look at the GeForce RTX 2080 SUPER Founders Edition. This card uses the familiar Founders Edition design we have come to know since it originally released last fall with the launch of the original RTX 2080 and RTX 2080 Ti. This model will be available directly from NVIDIA and have an MSRP of $699 making it not only a faster, but also less costly card compared to the original GeForce RTX 2080

When it comes to competition, the card competes against AMD's recently launched, 7nm RDNA based Radeon RX 5700 XT which does cost $100 US less but doesn't have the RTX feature set that GeForce cards do support. In addition to that, while the Radeon RX 5700 XT was shown to be about 10% faster than the RTX 2070 on average, the RTX 2070 SUPER is about 16% faster average and up to 24% faster. It also has a maximum compute power of 9.1 TFLOPs FP32 / 9.1 TFLOPs INT 32 and 72 Tensor OPs. Another surprising fact about this card is that it has 10W lower power than the Radeon offering and the reference design offers two axial tech-based fans compared to just one on AMD's reference design. So in an all reference battle, you know who the real winner would turn out to be.

Out of all the cards, the GeForce RTX 2060 SUPER has received one of the major upgrades. The GeForce RTX 2060 SUPER would be utilizing the full Turing TU106-410 GPU die with 2176 CUDA Cores, 136 TMUs, and 64 ROPs. It would also feature 272 Tensor Cores and 32 RT cores. The clock speeds would be maintained at 1470 MHz base and 1650 MHz boost with the TGP (Total Graphics Power) being set at 175W. The chip will be accompanied by 8 GB of GDDR6 memory operating at 14Gbps along with a 256-bit wide bus interface, delivering a total bandwidth of 448 GB/s. The Vram would be the biggest upgrade over the 6 GB RTX 2060 which also featured a cut down 192-bit bus interface. 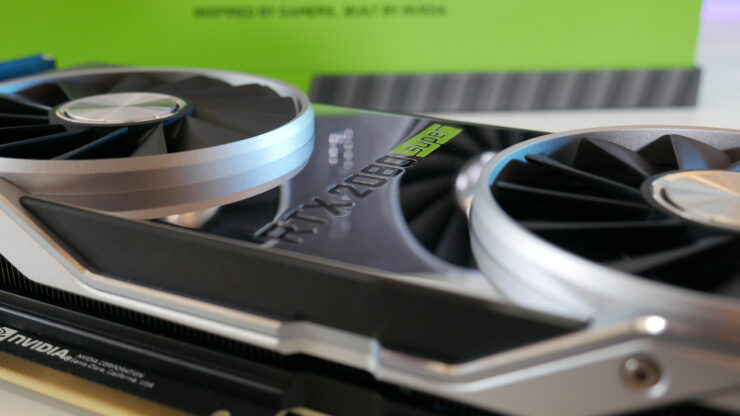 The GeForce RTX 2080 SUPER offers a measurable increase over the original RTX 2080 and those in the market for the Founders Edition will find themselves a welcome savings of $100 for that particular model.