NVIDIA's flagship mobility GPU, the Turing based GeForce RTX 2080 SUPER has been spotted in the latest Geekbench database entry. A few months back, it was reported that NVIDIA was working on its Turing GeForce SUPER refresh for gaming notebooks and it looks like we are super close to the launch of these high-performance mobility discrete GPUs.

Earlier, it was revealed by the folks over at NotebookCheck that NVIDIA was working on SUPER variants for the mobility Turing lineup too. A leaked slide from an internal presentation revealed that there would be at least five variants which would include:

The entry of the NVIDIA GeForce RTX 2080 SUPER mobile was spotted by TUM_APISAK. The specific variant is in a Max-Q design which runs at lower clock speeds than the standard variant but offers better performance per watt for longer battery life and cooler/quieter operation in gaming laptops. The RTX 2080 SUPER Max-Q is configured with 48 SMs which equals 3072 CUDA cores and 8 GB of GDDR6 memory. The Max-Q solution is listed with a maximum frequency of 1230 MHz but as told earlier, Max-Q variants operate at lower clock speeds than standard mobile GPUs. 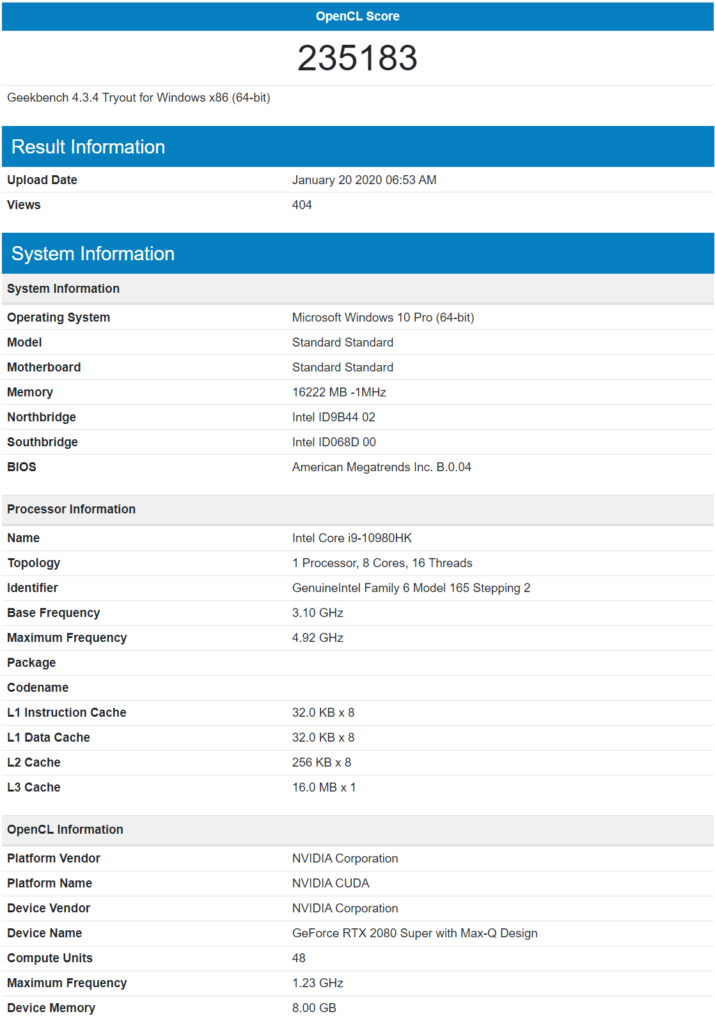 The discrete RTX SUPER Max-Q mobility GPU was running alongside an Intel Core i9-10980HK CPU which is part of the upcoming 10th Gen Comet Lake-H series family. We detailed this CPU earlier today and you can find more details here. It looks like gaming notebooks with Intel CPUs will once again be the best option for high-end enthusiasts who want the best graphics performance as the fastest Ryzen 4000 'Renoir' based laptops are currently outfitted with RTX 2060 or the RX 5600M / RX 5700M graphics chips. The NVIDIA GeForce RTX 2070 SUPER & RTX 2080 SUPER mobility GPUs are literally steps above the GPUs featured in Ryzen gaming notebooks & only Intel-based laptops would make full use of them.

The NVIDIA GeForce GTX 1650 SUPER, as it is called, would have a Max-Q variant configured at 35W TGP and a standard variant at 50W TGP. The other variant would also be similar in terms of TGP but would be a new entry-level SKU for the mobility market. Both of these variants would feature 4 GB of GDDR6 memory. Expect the GeForce RTX SUPER Notebook Refresh GPUs to launch alongside the Intel 10th Gen processors in the coming months.