ASUS's ROG GeForce RTX 2070 STRIX OC is a standard sized graphics card. It is built with the dual slot specifications and would have no problem fitting inside PC cases which is great for a card that is aimed towards the higher-end mainstream users. The card has dimensions of 30.5 x 13.06 x 4.89 cm. 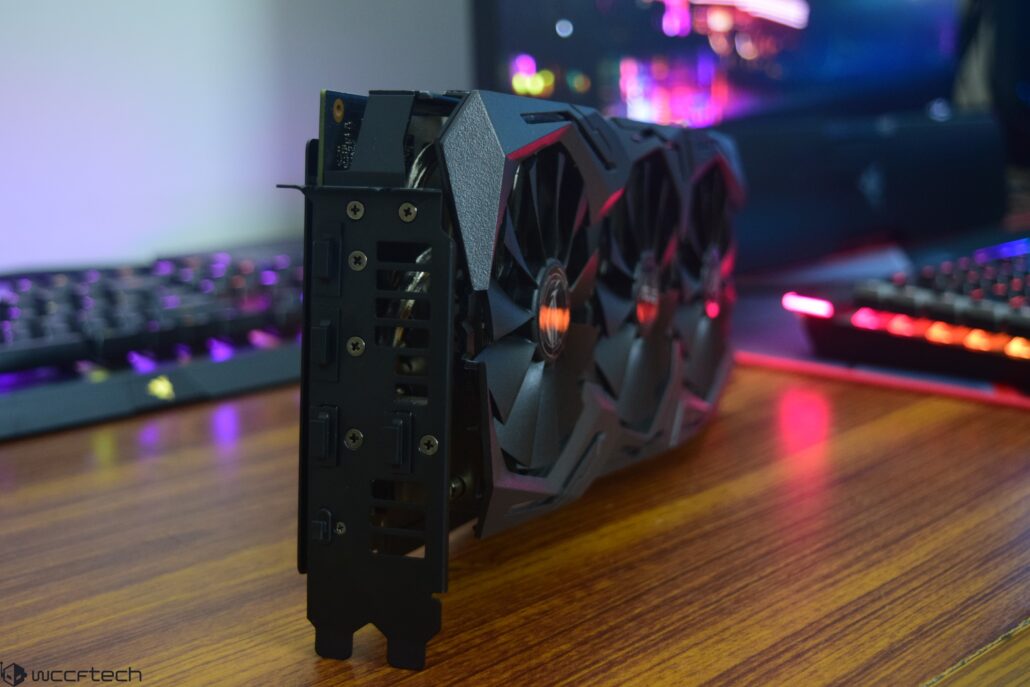 You would have to keep in mind the height when going for a dual slot card solution as your case or motherboard PCIe slot combination may not allow such setup. The cooling shroud extends all the way to the back of the PCB and it requires a casing with good interior space for proper installation. 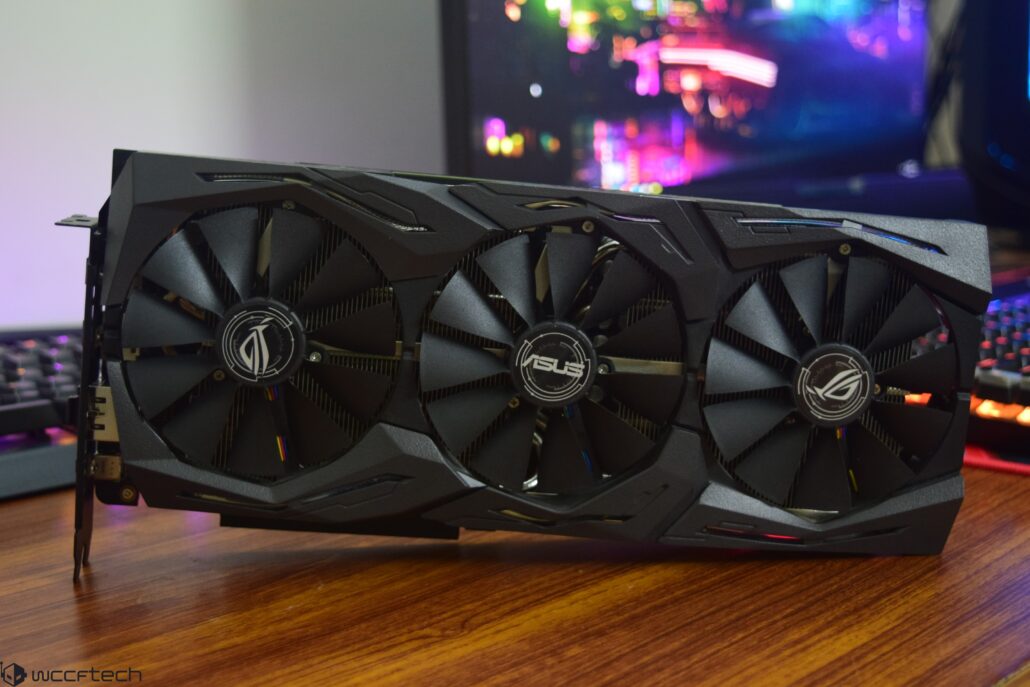 On the back of the card, we spot an extremely good looking ROG STRIX backplate that comes integrated with ASUS Aura Sync lighting. We will get to the Aura Sync part in a bit but just looking at this gorgeous backplate shows that the card is going to offer a serious punch. There are cutouts in screw placements and we can spot a unique texturing across the backplate in the silver lining. 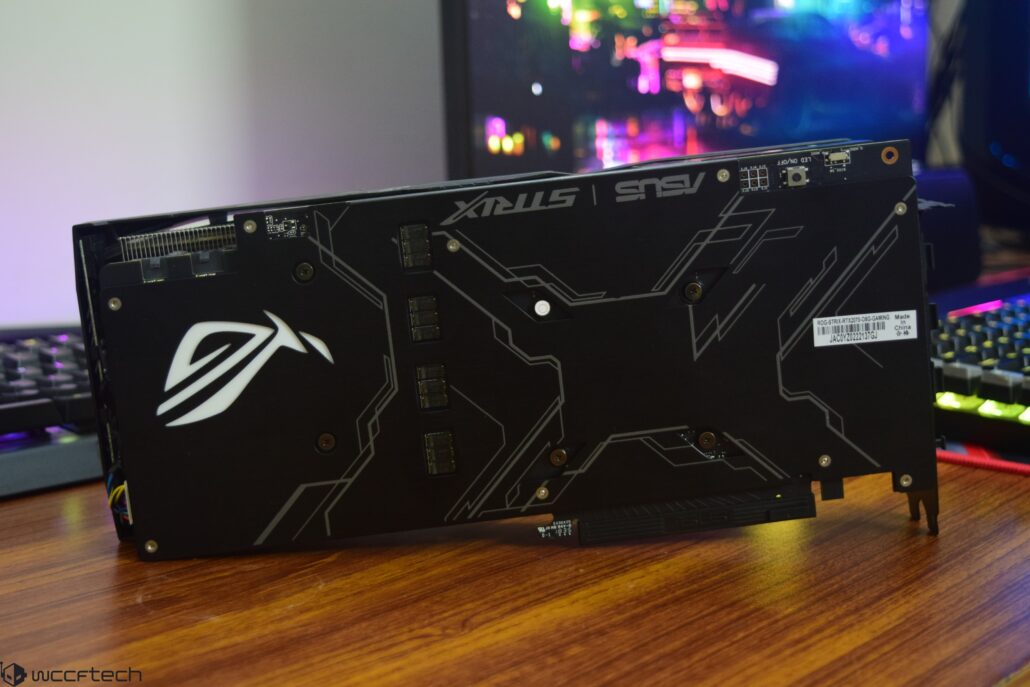 In terms of design, we are looking at a gorgeous, all matte black shroud which comes with a unique and very industrial build design. The card has three fans on the front, all of which are 90mm and come with ASUS’s patented Wing Blade design that offers 105% higher air pressure and operates 3x quieter than the reference cards. 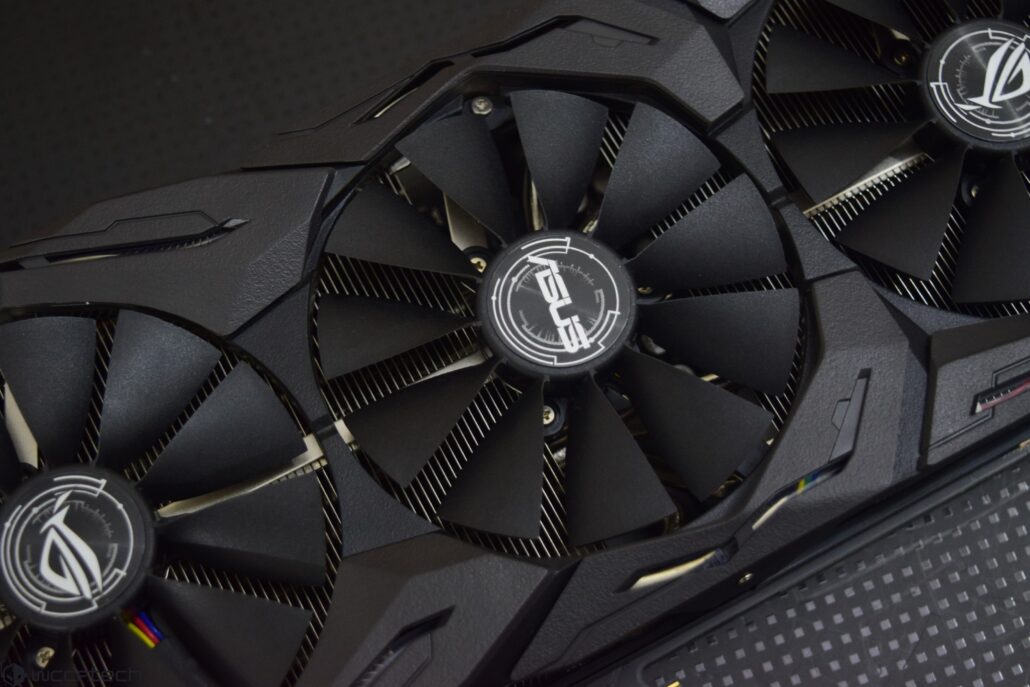 The shroud comes with cutouts the implement ASUS’s AURA Sync lighting. Each of the six cutouts comes with LEDs that light up and can be modified through the AURA RGB Lighting software. The software allows for several different lighting modes and full RGB colors (up to 16.8 million). 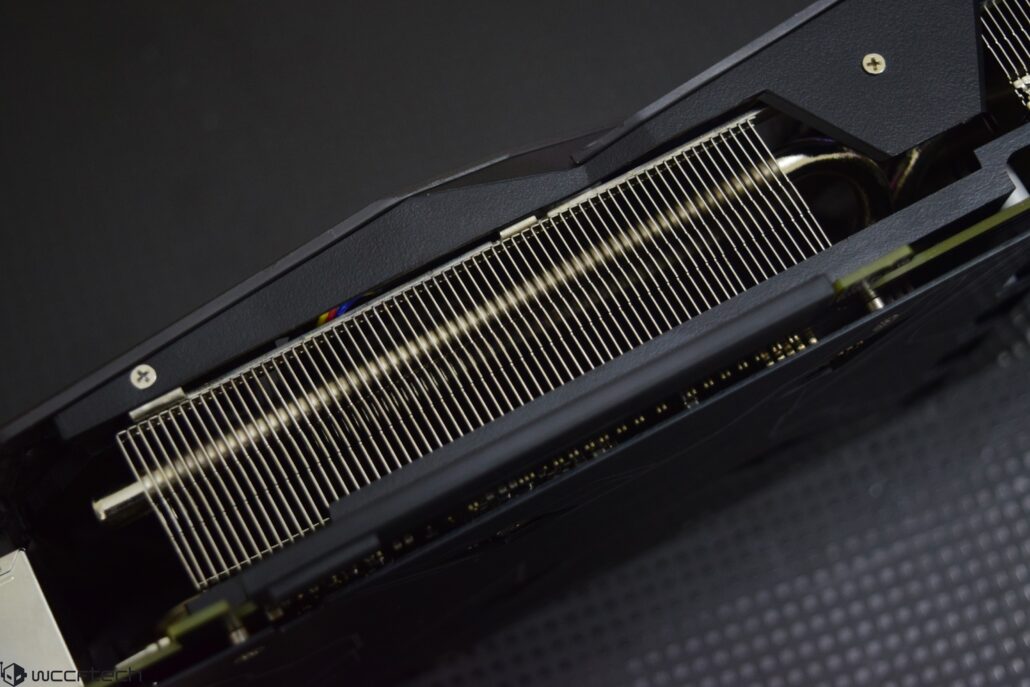 The NVIDIA GeForce RTX 2070 graphics cards don’t feature any NVLINK connector as they don’t support Multi-GPU functionality. This has been done for many reasons as two RTX 2070s have a potential to outperform the RTX 2080 Ti in optimized titles which may end up cannibalizing high-end GPU sales. The other is the optimization factor and we know that multi-GPU support isn’t the best around these days so NVIDIA has only kept it for users who are willing to pay a premium on their higher end cards. 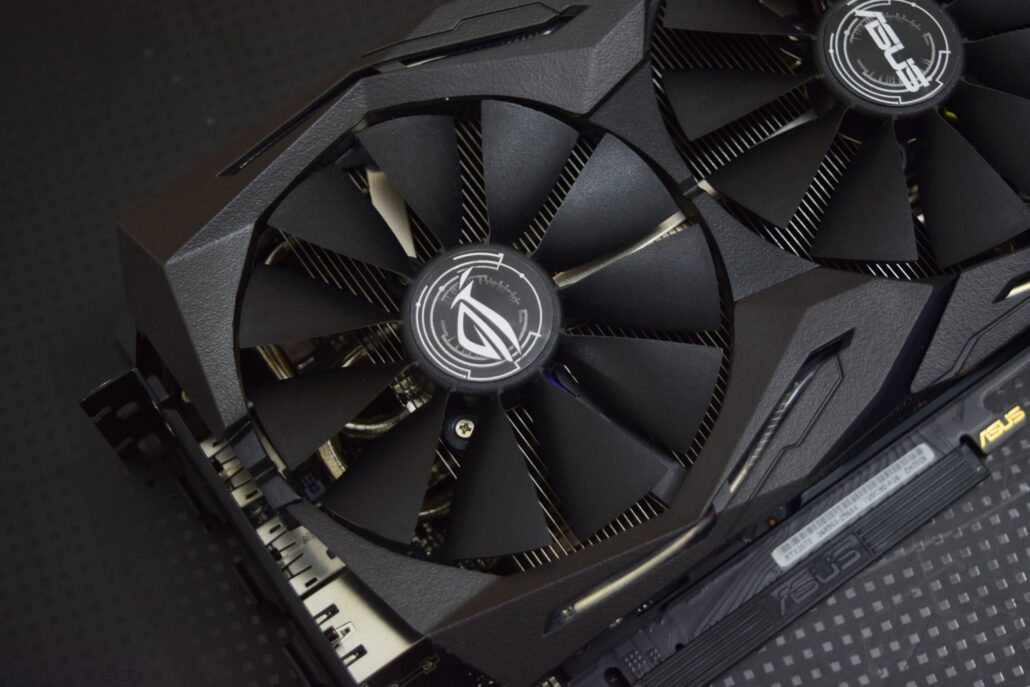 There’s more to the fans than just being silent and offering more airflow. The Wing-Blade design is also IP5X-Certified, offering resistance to dust and small particles that can enter the GPU assembly. The dust resistance improves reliability and offers a longer lifespan. 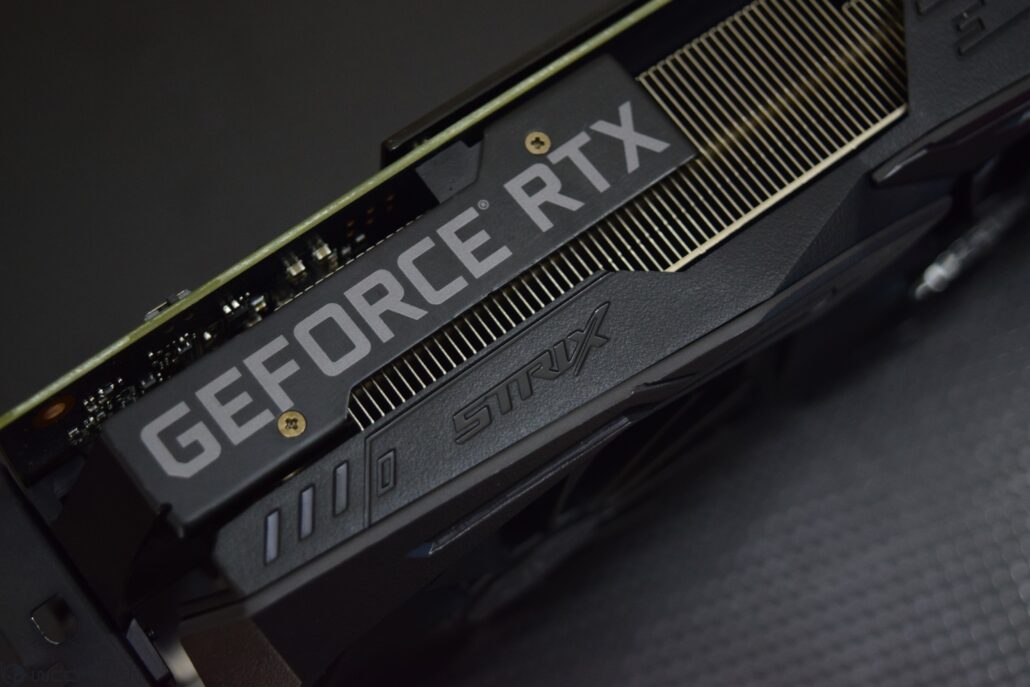 The fans also feature 0dB technology which means that the fans will not spin unless the hit a certain temperature threshold. In the case of the ROG STRIX 2070 OC, that’s 55C (Degrees). 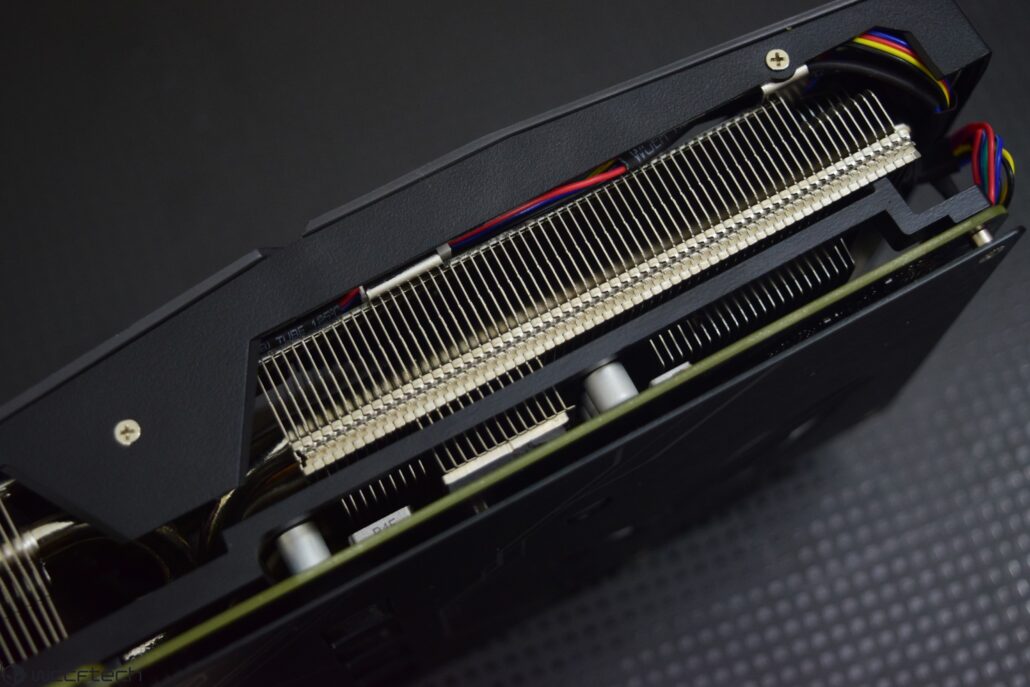 With the outsides of the card done, I will now start taking a glance at what's beneath the hood of this graphics card. The first thing to catch my eye is the huge fin stack that's part of the beefy heatsink which the cards utilize. 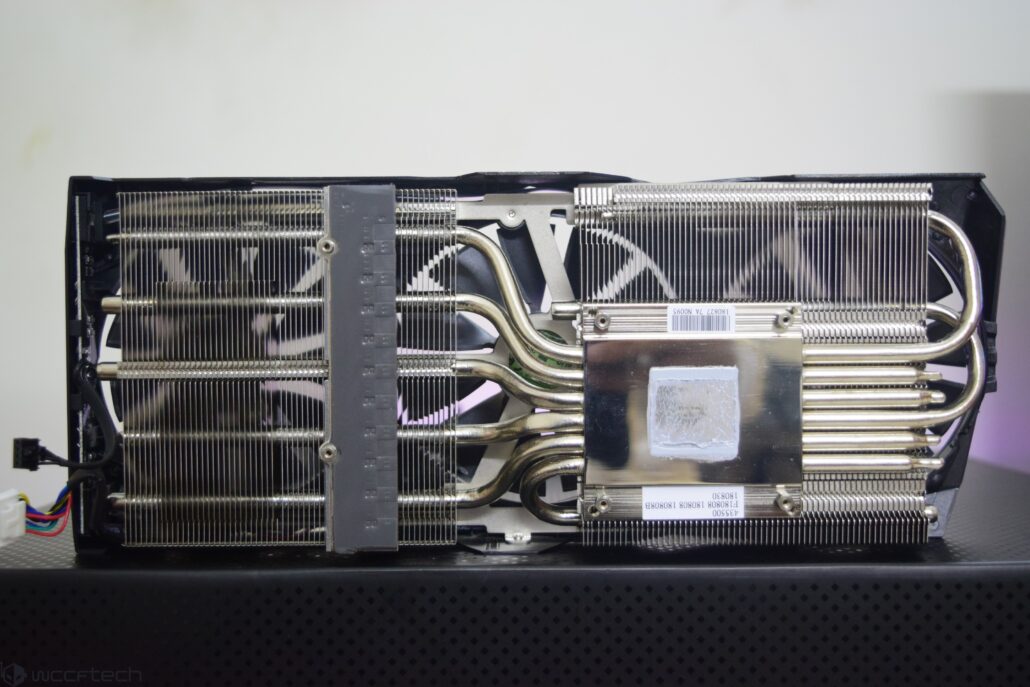 ASUS has done a mighty impressive job with the heatsink which comes in two sections. The large triple-fan shroud pushes air down towards a large heatsink that offers 40% more heat dissipation area which allows for 30% better cooling performance. The MaxContact technology inside the fan is 10% flatter to the traditional heat spreader and comes with 2x more GPU contact area. A total of six copper heat pipes run through the dual heatsinks, pushing out heat from the GPU surface. 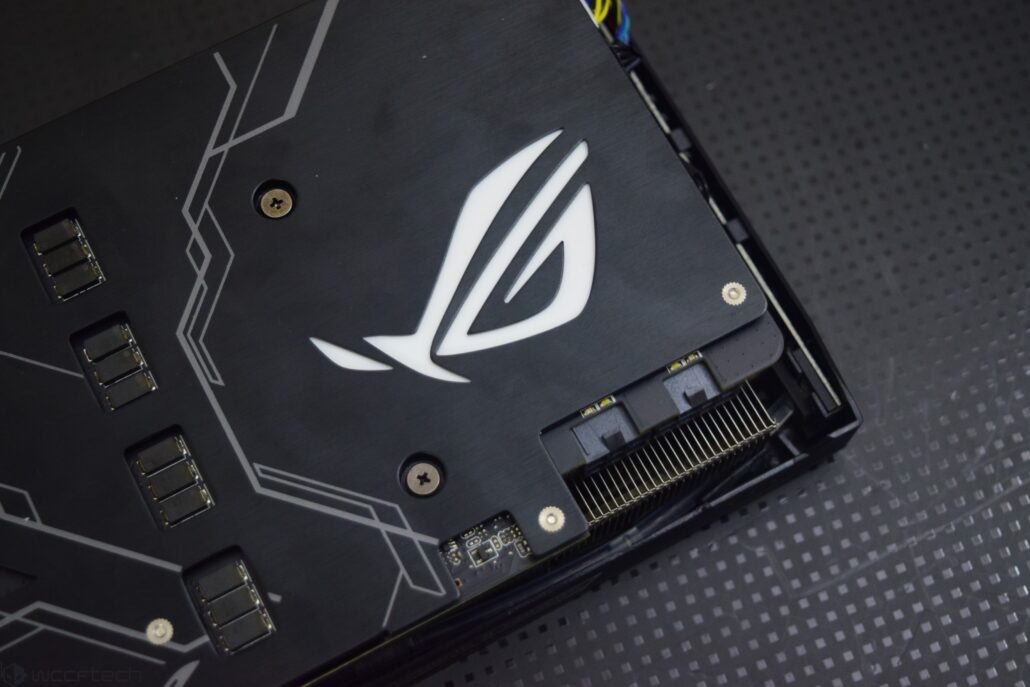 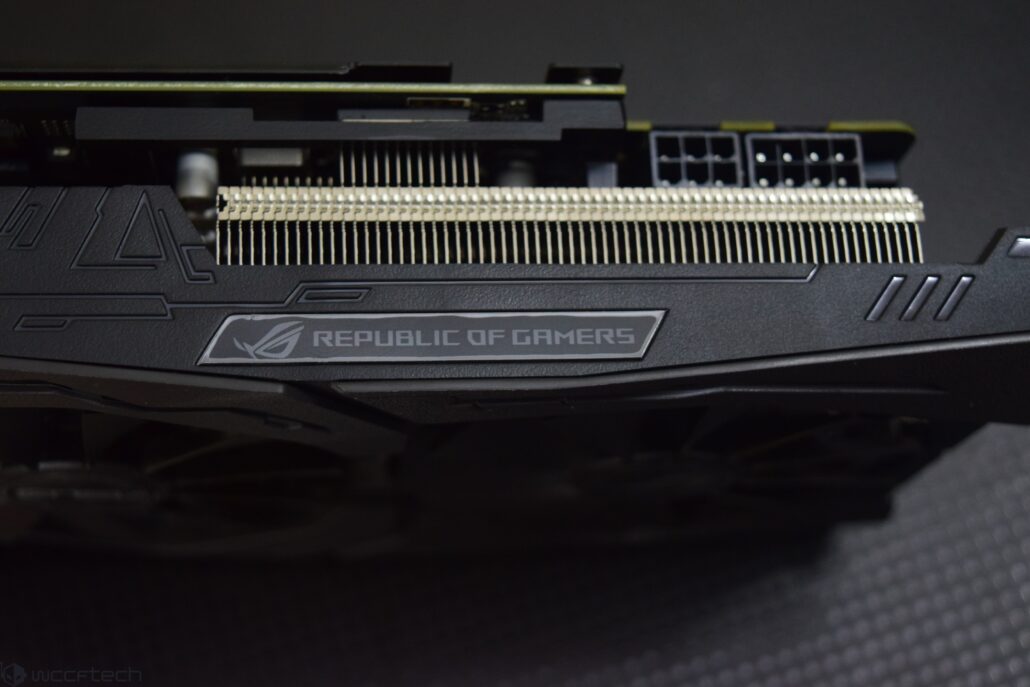 The ROG STRIX 2070 OC features a custom PCB which means the power circuitry is entirely non-reference. Power is provided through a 6+8-Pin connector configuration which means we are looking at a maximum power input of 250W. The card has an official TDP of 175W (reference models) but the premium components make sure that every bit of juice gets supplied to core, memory, and VRMs when overclocked. 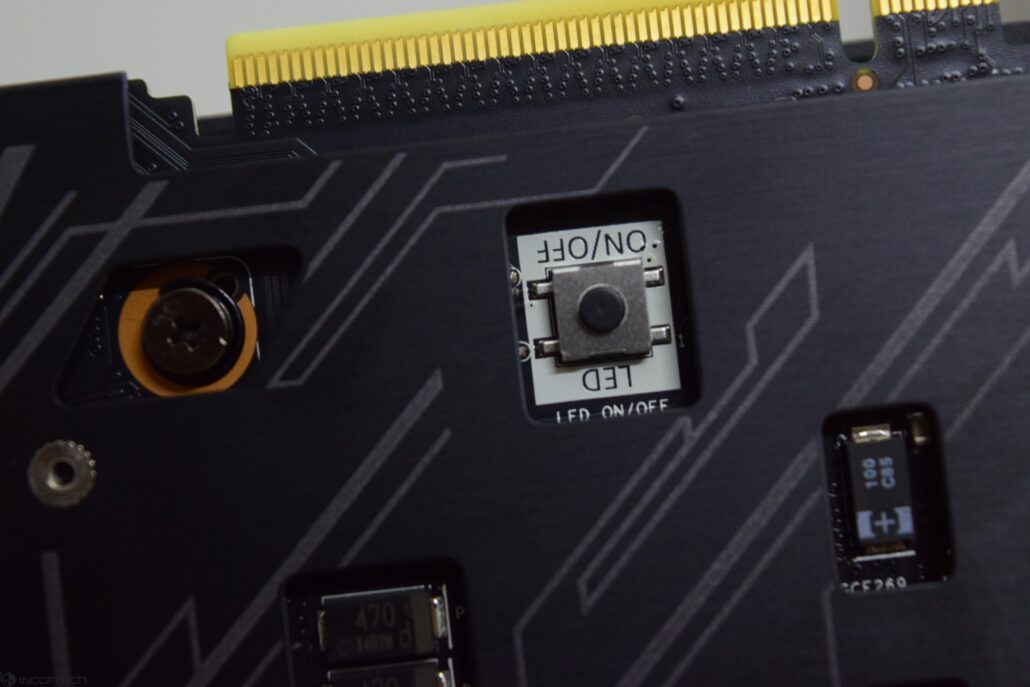 If you are not a fan of the RGB LEDs, ASUS has a Stealth mode switch that lets you turn off or on, all of the LEDs on the card. 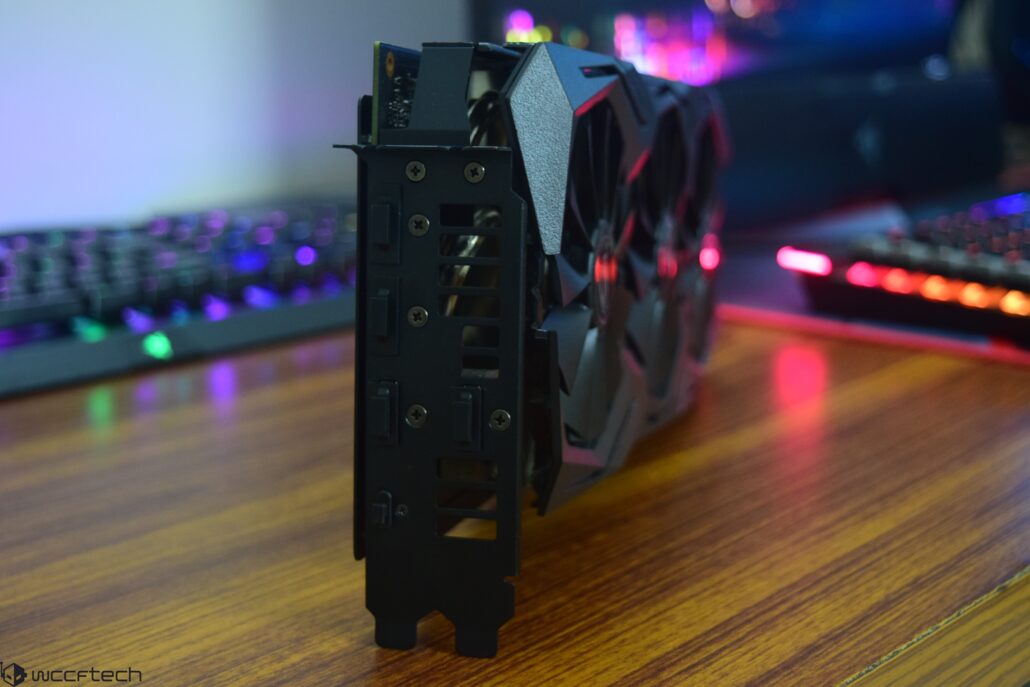 The PCB is covered with a die-casting that offers increased heat dissipation for the memory and VRMs while also offering increased reinforcement. The circular vented heat pipes make sure that heat load is equally distributed among the heatsink blocks. 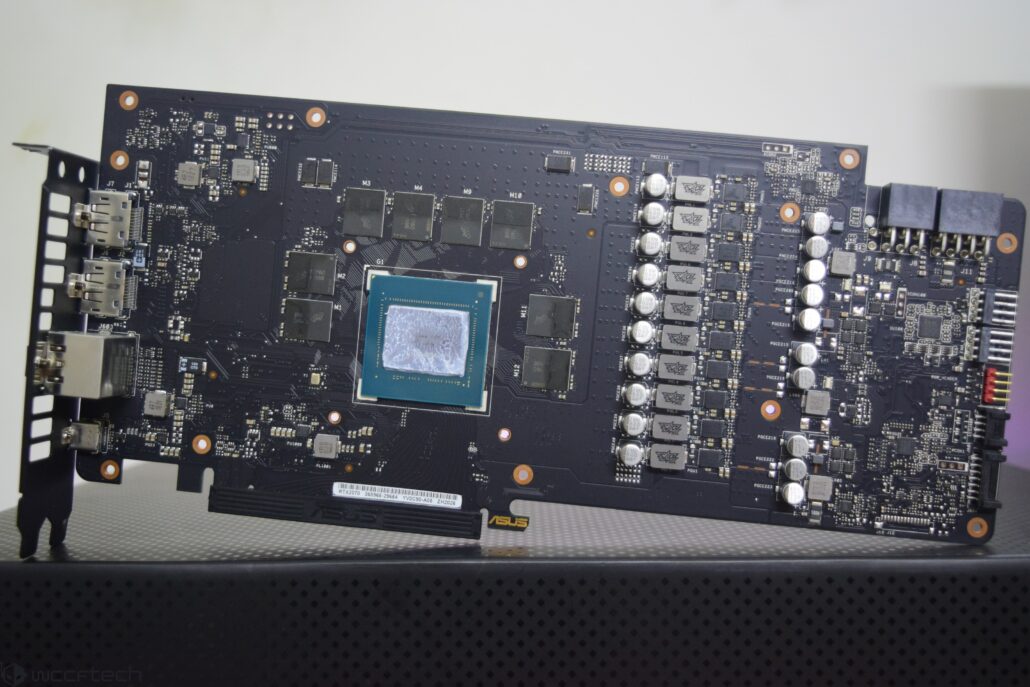 Following are a few close-up shots of the reference PCB which is being offered under the hood of the ROG STRIX OC series graphics cards.

ASUS has placed a voltage measuring points for the graphics card, right next to the power connectors. These are ideal for overclockers and enthusiasts who want real-time information on the voltage that is being fed to the card while putting the card under extreme overclocking loads.

On the back of the card, we can spot multiple 4-Pin connectors which are part of the ASUS Fan Connect II system. This system offers two 4-Pin, hybrid controlled fan headers that could be connected with PWM and DC type fans for better system cooling. ASUS has even added an AURA Sync RGB header on their graphics card which can be attached to an LED strip for PC lighting and customization.

ASUS ROG STRIX series cards utilize their AURA SYNC RGB technology to offer you a visually pleasing lighting experience on your graphics cards. There are a total of 6 different RGB effects which you can choose from and the cards have eight RGB accent points, six on the front, one on the side and one on the back of the card which looks really good. You can fully customize the RGB lights to your preference using the ASUSs’ ARUA Sync application from MSI’s web page. 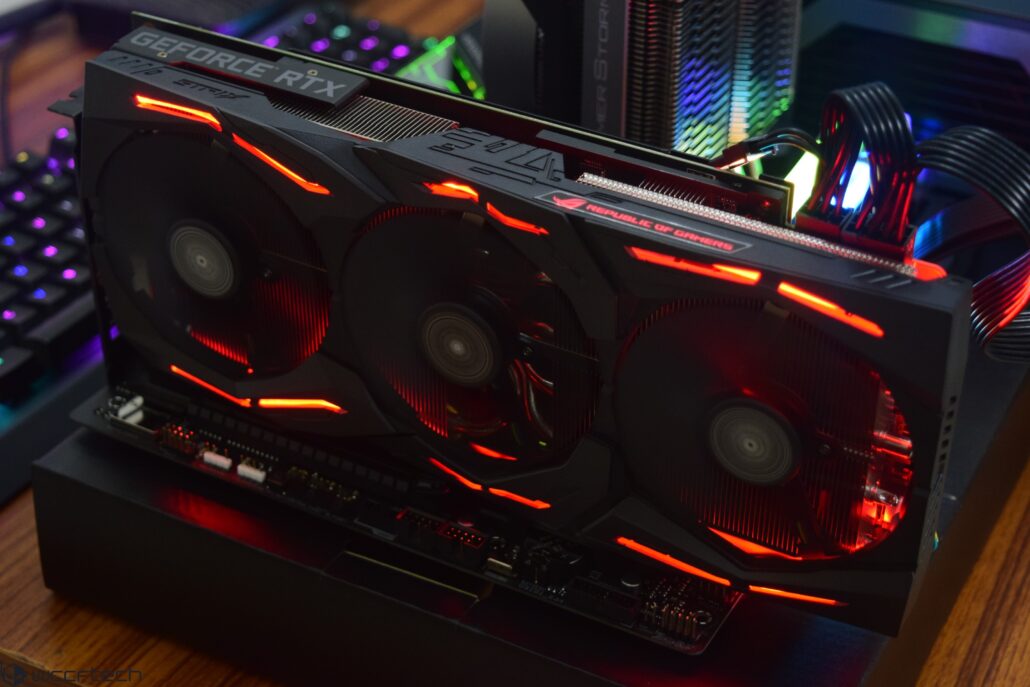 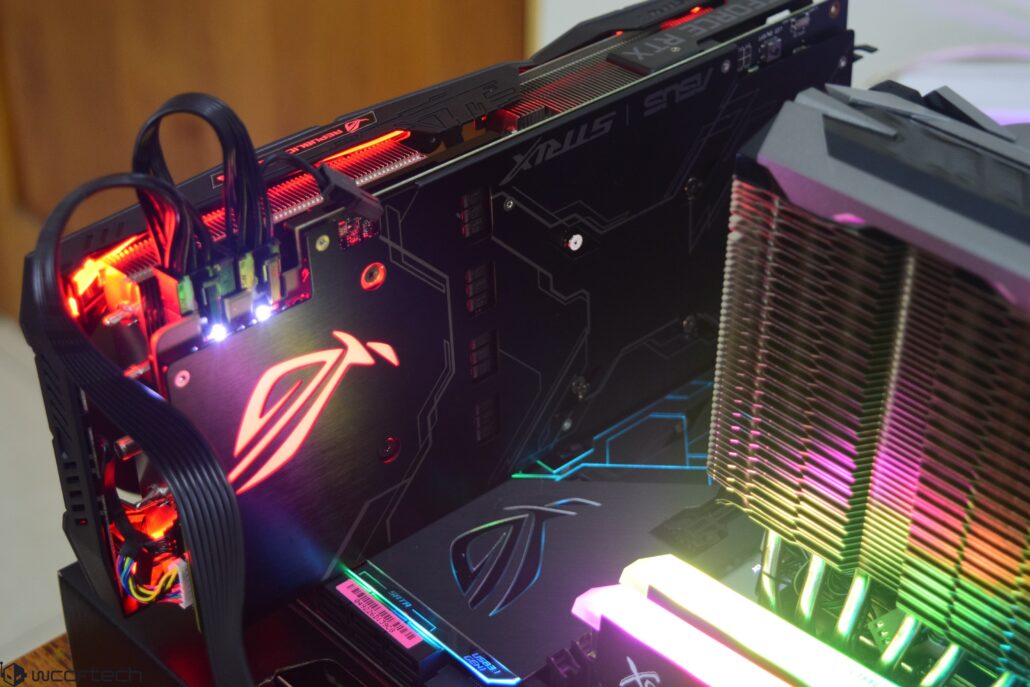