Today, I got to test the third card within the Turing based GeForce 16 series family. A family that is similar and also different than the GeForce RTX 20 series lineup. The first two entrants to the GTX Turing lineup, the GTX 1660 Ti and GTX 1660 offer very competitive performance at their respective prices along with the best in class power efficiency. Both of these cards were placed in the sub-300 USD segment and now Turing has arrived in the sub-200 USD segment which is largely dominated by AMD's extremely popular and competitive Radeon RX 570 and RX 580 graphics cards. With our performance numbers, we can now tell whether it was worth waiting for the GTX 1650 or not. 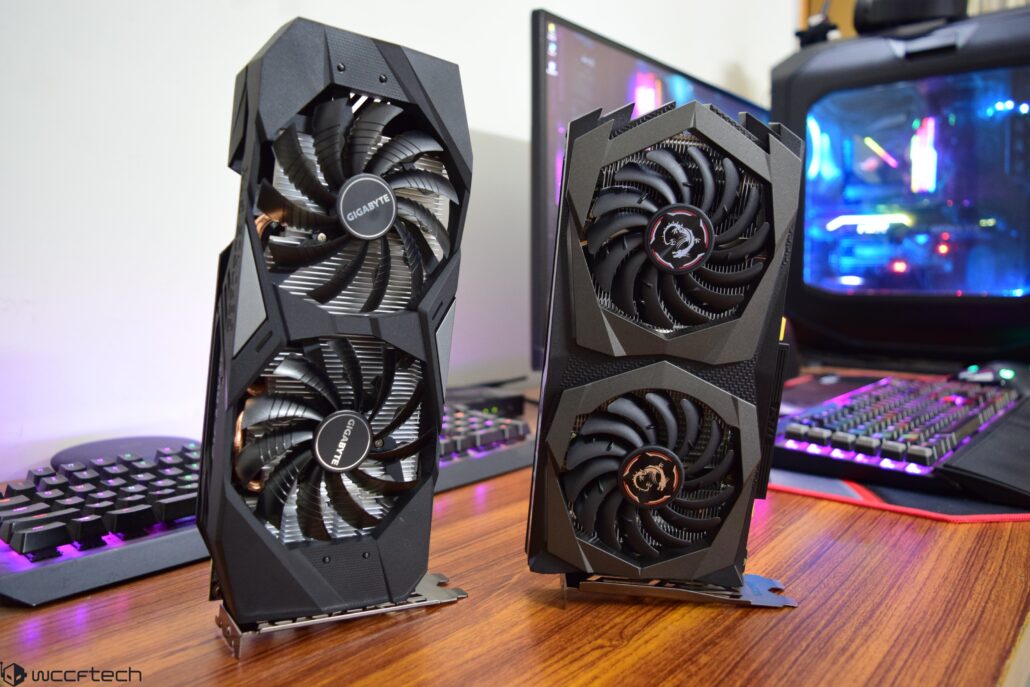 The NVIDIA GeForce GTX 1650 costs $150 US and custom models range anywhere from reference MSRP to $170 US. Given the specifications, I would've said it was a decent price but the first issue is that the Radeon RX 570 4 GB exists and it starts at $129 US. If that is not enough, you're paying 150 bucks for a 4 GB GDDR5 graphics card whereas a new Radeon RX 570 8 GB graphics card can be bought for as low as $159 US. If you're going for the standard 1080p resolution of gaming, then even the Radeon RX 580 4 GB option, starting at $169 US, is still a great option which delivers much better performance than the GeForce GTX 1650 out of the box.

You see, the problem with the graphics card is related to both the price and specifications. If you take a look at the GTX 1050 which we got with the Pascal lineup, it launched at $109 US. The $109 US price would've made the GTX 1650 a decent if not perfect option compared to the 4 GB RX 570 considering it boasts superb power efficiency, even with the 6 pin connector on board. The lower temps, lower acoustics and highly efficient and compact designs would've made this card work but at $149 US, I just can't call this a perfect 1080p graphics card. In many upcoming titles with higher resolution textures, 4 GB VRAM would become a limitation, that's why the RX 570 8 GB exists for just a few bucks more.

It would've been wise for NVIDIA to offer the full configuration of their TU117 core on the graphics card for the same price but I believe NVIDIA is keeping that for a future variant, possibly the GTX 1650 Ti which has been rumored for a while. If the GTX 1650 doesn't perform well, I doubt how the Ti model would as it would cost around the same as the RX 580 4 GB models while performing under the RX 570 based on the numbers we have today. Now, NVIDIA has always had a market for such graphics cards as 75W designs are in huge demand in APAC based e-Cafe's but for the general audience who demand better gaming performance, I don't think the insanely good efficiency of this card is going to entice them much.

If we talk about the custom models, I think each AIB has tried their best to make their respective GTX 1650 stand out from the rest. The main models which I got today are the $149.99 MSI GeForce GTX 1650 Gaming X and the $154.99 Gigabyte GeForce GTX 1650 Gaming OC. Both graphics card are solid in terms of design, cooling and the little feature they have to offer which are a plus for such a small GPU. 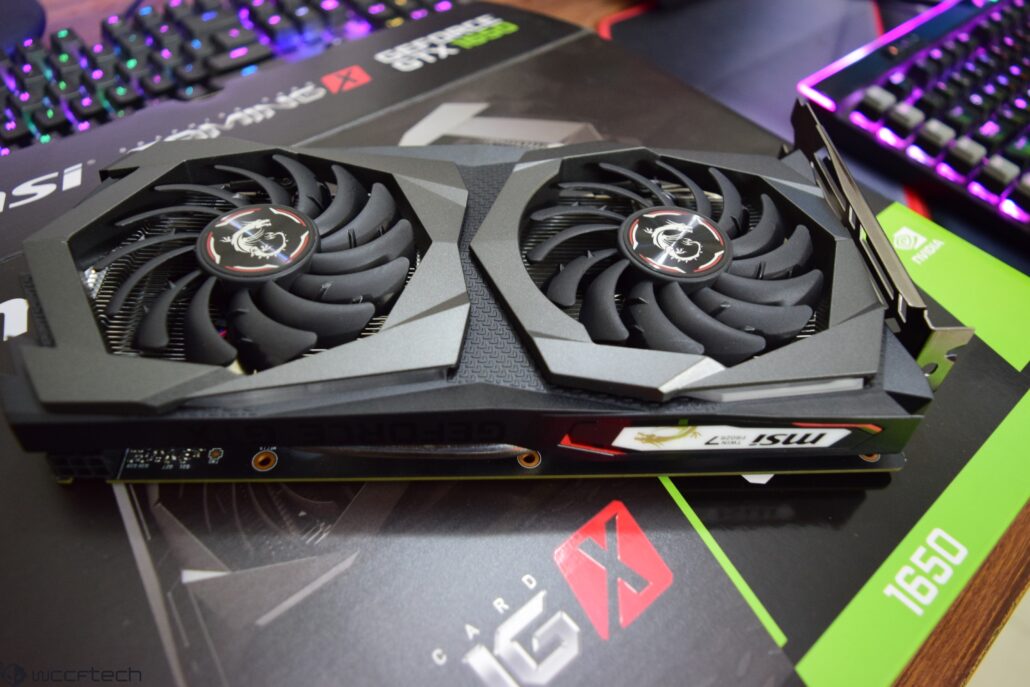 The MSI GeForce GTX 1650 Gaming X at $149 US has the highest clock speeds of the two models at 1860 MHz, a better cooler with MSI's TORX 3.0 fans and a fantastic Twin Frozr VII cooler design.

The MSI GeForce GTX 1650 Gaming X delivers exceptional results in terms of cooling performance and the card run at a stable boost speed of around 1950 MHz at most of the times through my test which means that even the toned down heatsink still performs great for TU117. The card rocks a great display configuration of three HDMI ports and a single DP port. There's no backplate on the card but MSI does have a Dragon logo etched on the back of the PCB 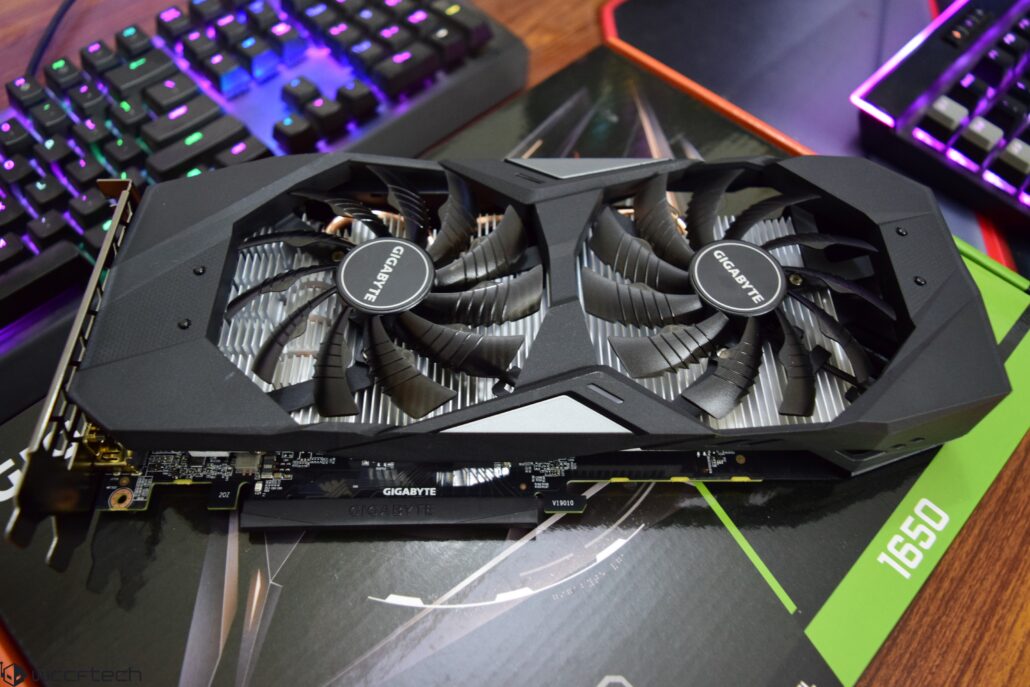 Also, the card does feature some of the best efficiency for Turing GPUs that I have noticed. This is true for all GeForce 16 series cards (GTX 1660 Ti and GeForce GTX 1660 included). At 75W, it does shine in the efficiency department and just shows that come the 7nm GPUs, NVIDIA may stir up some impressive numbers on smaller dies with more cores, more RTX and more raw power. The cooling and thermals were great too with both cards performing great and the TORX and WindForce fans on both variants offering low noise levels.

I believe that the NVIDIA GeForce GTX 1650 is stuck between the Radeon RX 570 and Radeon RX 580 4 GB models which are already so competitive price in the sub-$200 US segment, that everything else feels overpriced.

The GeForce GTX 1650 is a decent card, it's not the best in this segment but it has some great things such as an extremely efficient GPU on a 12nm process, runs really cool, has many compact variants which are ideal for small form factor PCs and as I mentioned, you don't have to be surprised if you see an e-Cafe running GTX 1650's over Radeon RX 500 series only because of that impressive 75W TDP figure which is still good enough to play several of the most popular eSports titles there are today.

The NVIDIA GeForce GTX 1650 is an extremely efficient graphics card with several compact designs such as the MSI GeForce GTX 1650 Gaming X ($149) and Gigabyte GeForce GTX ($154) 1650 Gaming OC which run cool, make next to no noise, can run on just about anything and play your favorite gaming titles at 1080p at a decent framerate. There's also the RX 570 as its competition (starting at $129 US) which offers much better gaming performance minus the rest. 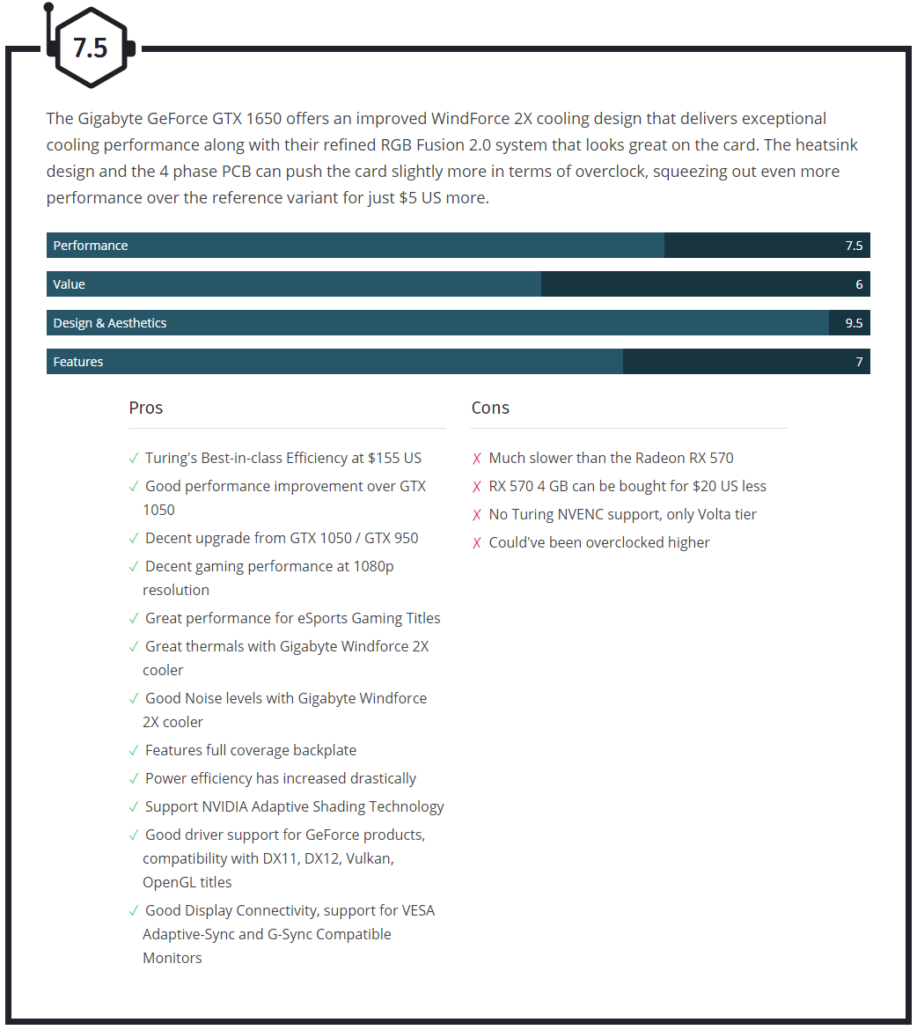 MSI went all out with their GeForce GTX 1650 Gaming X which retails at the MSRP price of $149 US, offering a stunning 1860 MHz overclock out of the box, their iconic Twin Frozr VII cooler with Mystic RGB Lighting and idle fan stop technology for the card to run quieter under non-gaming loads. The MSI GTX 1650 Gaming X is the perfect model you should aim for when considering to buy the GTX 1650.