NVIDIA and AMD have been tweaking performance of their cards for Ashes of the Singularity since the title released. It was the first to make use of the DirectX 12 API and the first to leverage from the new Async compute technology that makes use of the DX12 renderer to improve performance.

Here, the GTX 1070 Ti deliver a good increase over the GTX 1070 at both 4K and 1440P resolutions. The AMD cards have had a slight edge with the title since launch and with Vega launched, we will be testing the title once again when we have a sample in our hands. 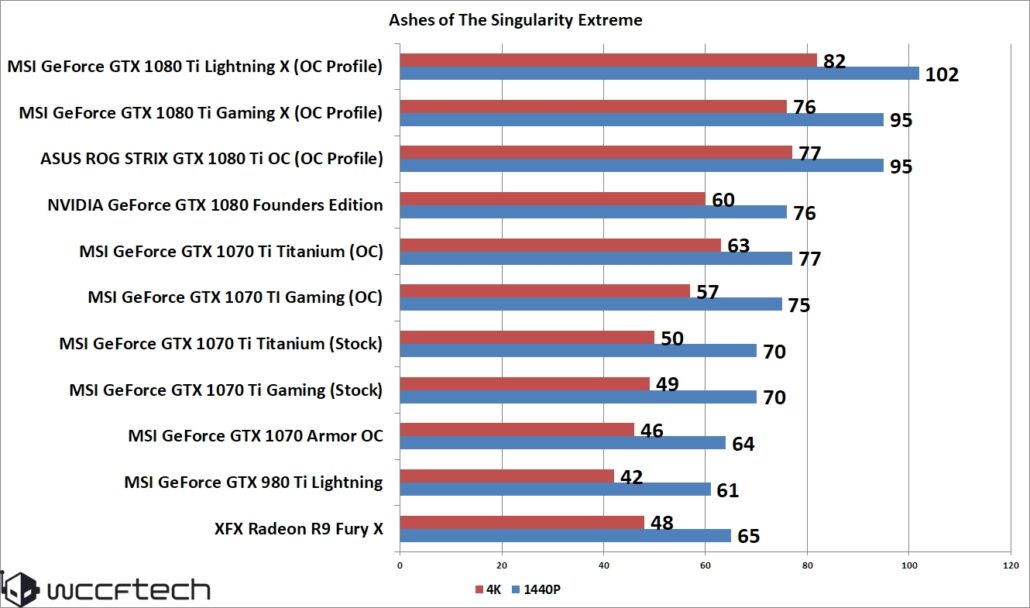 Battlefield 1 takes us back to the great war that was meant to end all wars aka World War 1. Using the latest Frostbite tech, the game does a good job at looking gorgeous in all ways possible. From the open world environments to the intense and gun blazing action, this multiplayer and single player FPS title is one of the best Battlefields to date.

The GeForce cards show a strong performance in Battlefield 1 with the GTX 1070 Ti, GTX 1080 and GTX 1080 Ti scoring over 100 FPS at 1440P and the latter delivering more than 60 FPS at 4K resolution while delivering maximum visual quality. AMD has also tweaked their performance in the title and GCN based cards now deliver good performance compared to their rivals. 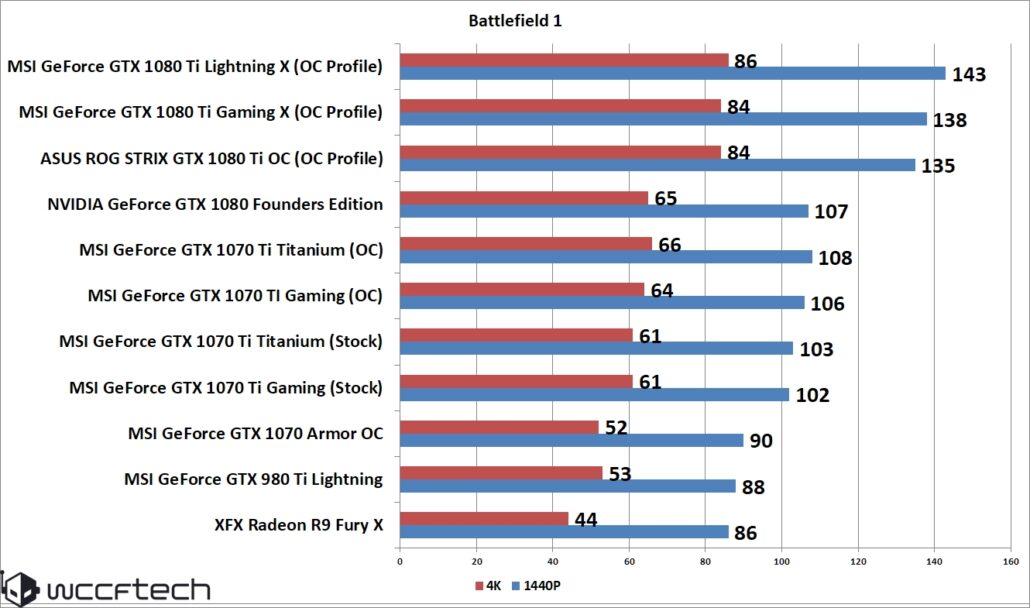 Here, the likes of the 1080 Ti are unable to reach 60 FPS on 4K but deliver around mid 40s (average) frame rate. We can most definitely increases the FPS by reducing a few visual settings but overall, the 1070 Ti can deliver a playable experience at 1440P resolution, similar to a GTX 1080. 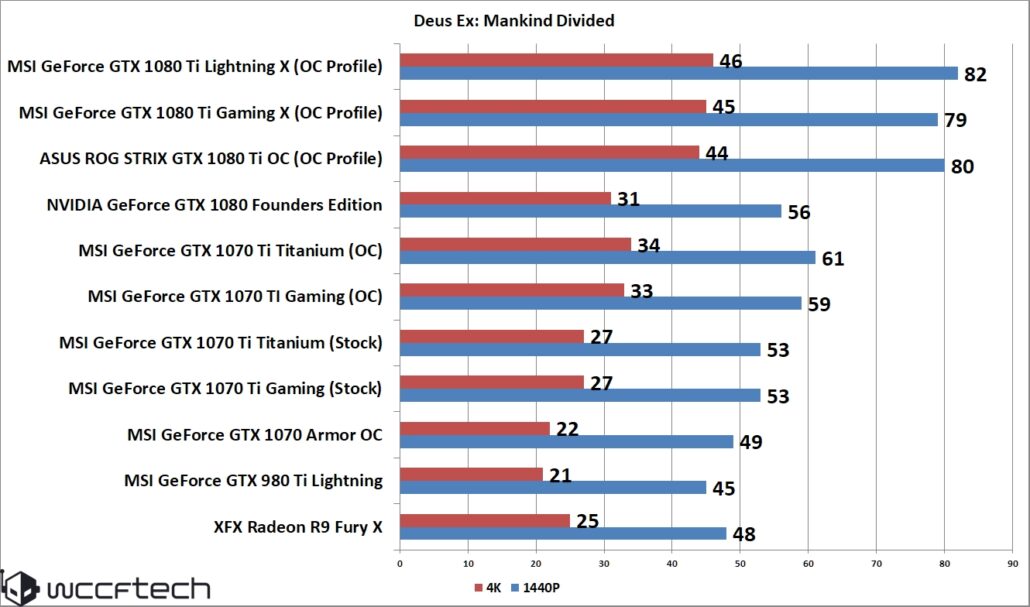 With the latest drivers, NVIDIA has managed to up the performance of their Pascal and Maxwell parts in Hitman (2016). The game has been a major win for AMD graphics cards that still show a strong gain in performance when switching over from DX11 to DX12, but NVIDIA is slowly catching up with their drivers. Here, the GTX 1070 Ti delivers more than 87 FPS at the highest settings on 1440P resolution at reference and 92 average FPS when overclocked. These numbers once again are right under the helm of the GTX 1080. 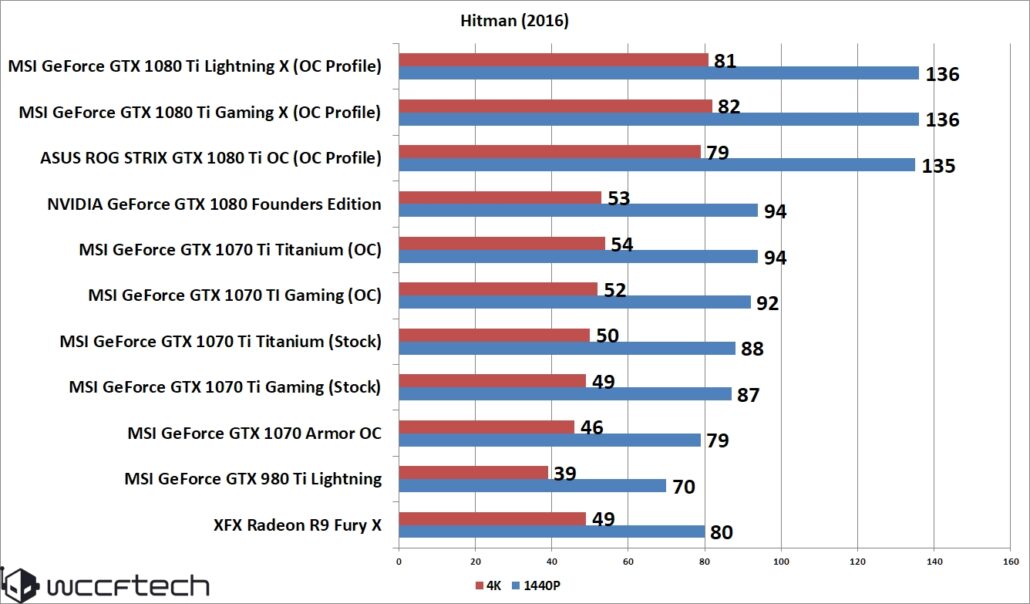 Rise of the Tomb Raider is one of the most beautiful games that I have played recently and was patched to the DX12 API. The game features a wide variety of settings and we chose Very High, HBAO+ without any AA. The game managed to hit 84 FPS on the 1070 Ti at 1440P which is good. 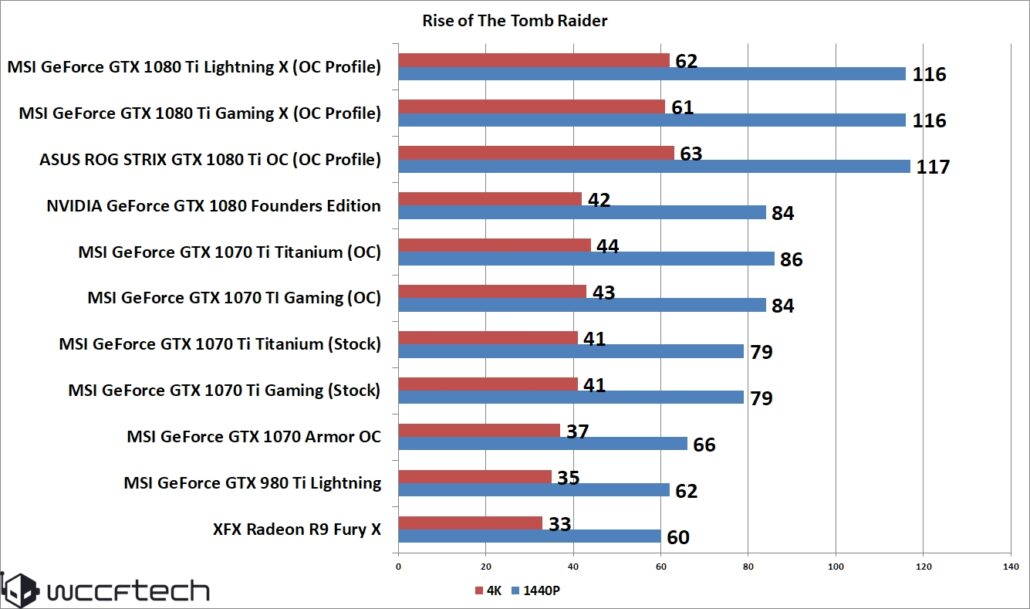