The Review - Introduction and Synthetics

We’re going to do something slightly different for this review. A lot of people overclock, so I’m going to compare the MSI 1080 Gaming X to the Titan X on both a stock for stock basis, as well as from an overclock to overclock perspective. Please do keep in mind that overclocking if not done carefully can potentially damage your card/system and also keep in mind that the results you see here are obviously not guaranteed to be reached on any given 1080 you buy. Even on identical model cards, chip quality varies and this will result in different overclocked capabilities.

Furthermore, this isn’t an overclocking guide. There are plenty available on the web but for those curious, I’ve taken a basic approach and opted not to overvolt. I bump up the core clocks, faster at first, then by smaller amounts until the card displays instability (either via artefacts or the display driver crashing etc), then dial it back a bit and run the 3DMark Stress test.

Once that’s done, I do the same with the memory clock. In the end I managed to get the card relatively stable (98.6% on 3DMark Firestrike Ultra Stress Test) with a core clock at 2114 and Memory at 11016.

Also please keep in mind that for people considering overclocking their Titan X, half of the memory chips are on the underneath of the card so are not directly cooled. With no way of monitoring the temperature of these chips, one should absolutely be extremely cautious in overclocking Titan X memory (which GM200 responds very well to in performance testing so is extremely tempting to do!)

So, let’s take a look at the results. 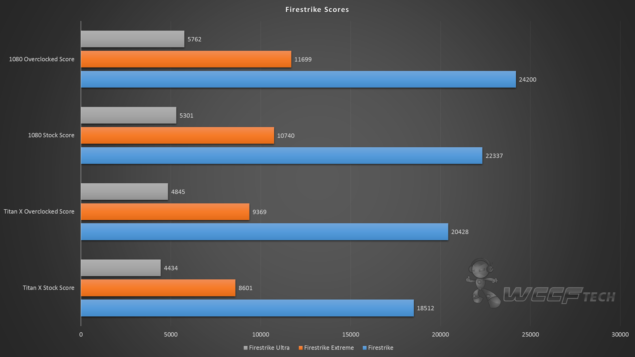 The callout point here is that for normal Firestrike (1080p) I am at least somewhat CPU bound once I start overclocking the Titan X (the “Brawn” achievement in Firestrike). Even so, the 1080 gives a commanding lead over the Titan X both in stock and overclocked form, giving about a 20% increase stock to stock and an 18% increase overclock to overclock.

As you raise the resolution, the difference becomes greater with an almost 25% increase on Extreme stock to stock and the same again overclock to overclock.

Ultra sees a little under 20% increase stock to stock and just under 18% increase overclock to overclock.

Meanwhile, overclocking gives a reasonable return on both cards with Titan X giving about 10% to 1080’s 8% boost in Firestrike, 9% to both in Extreme and just over 9%/just under 9% to Titan X and 1080 respectively in Ultra.

Scores are all well and good, but we want frames! For the various Firestrike results, the FPS scores are the average across the 2 graphics tests performed. 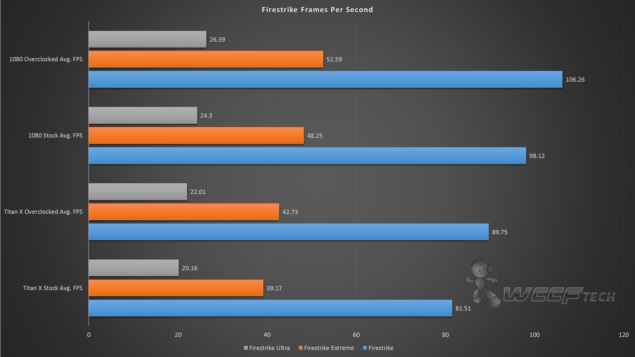 As we can see from these, the frame rate boosts line up and scale basically as the scores do. Standard Firestrike matches the increase in scores. Extreme gives slightly less bang for buck on frame rate vs. score giving only a 23% improvement in frame rates vs. a 25% improvement in scoring terms stock to stock and overclock to overclock. While Ultra again gives just over 20% and just under 20% boost to frame rates.

Heaven is a similar story to Firestrike with the 1080 again laying down its serious gaming capability credentials. Unfortunately for some reason, Heaven didn’t want to play nicely with the Titan X in overclocked mode regardless of how much I experimented with it and tried to get any decent level of boost over stock. As such, all Heaven slides are looking at Titan X at stock clock speeds only. It’s not ideal, but rest assured that most of the tests were fine with the Titan X being overclocked.

In using Heaven, we of course use Ultra with Extreme Tessellation, 8x AA and full screen at the various resolutions. 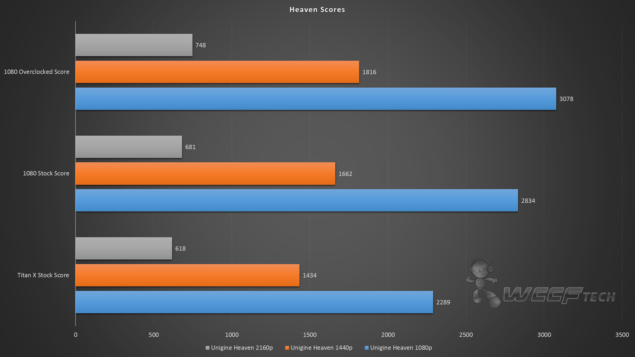 Heaven doesn’t give us any fancy achievements if we’re CPU bound. It does seem to scale better at 1080p than Firestrike did giving a 23.8% increase stock to stock and 34.4% boost stock to overclock (unfair yes but you can only compare what works at the end of the day).

On the frame rate side of things, we see a broadly similar story. 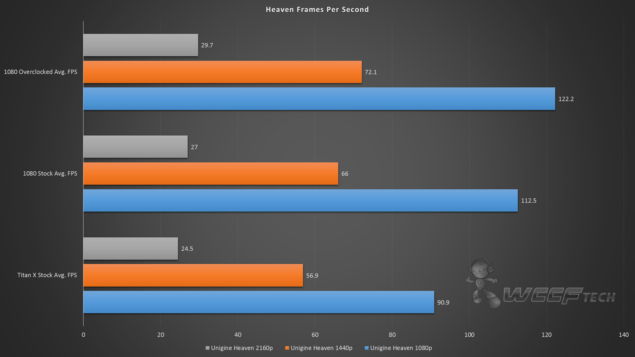