The last time I remember immediately falling in love with a games colour palette - not its overall art style but just the foundational colours that make up the world - was Deus Ex: Human Revolution. Its black and gold aesthetic was outstanding in an era hallmarked by muddy browns and dull greys. In Other Waters had the same effect on me, and is even more beautiful in its simplicity. Made almost entirely of an inviting blue and yellow combination, this game sets itself up perfectly with just two colours.

In Other Waters casts you as an exo-suit AI that is trying to help one scientist find another in a strange and sometimes dangerous ocean on an alien planet. You’ll have to scan the environment and plot routes across the ocean floor, getting brief written descriptions about the world around you, its native wildlife, and short conversations with the scientist you’re assisting. But that description doesn’t do justice to the game and how well it achieves its goals. You might be sitting there thinking that a game where you play as a diving suit with notions sounds boring, but you couldn’t be more wrong.

The writing in the game is fantastic. Each waypoint and description are only a sentence or two long, yet they perfectly conjure and invoke incredible images and truly alien landscapes and creatures within the player. This isn’t Mass Effect, the alien life here isn’t ‘women but blue’, they are bizarre and literally otherworldly, and that makes studying them so interesting. The landscape is more familiar, deep ocean trenches, reefs of rock and sand, and forests of plant life, but while we all might have watched Blue Planet, the concept of actually exploring them is still pretty alien. Reading about the topography and what the scientist can see and interpret coupled with the simple colour palette, the limited information that comes up on your display paints an incredible picture that other sci-fi settings wish they could create.

And while you’re exploring the ocean floor, the soundscape helps compound the varying waves of awe, tension, and serenity that the game and writing invokes. The soundtrack is reminiscent of No Man’s Sky with a range of beautiful but strange melodies. But in honesty, there is a lot more connection between In Other Waters and No Man’s Sky in the pure joy of gentle exploration.

Whereas No Man’s Sky was more freeform to begin with, In Other Waters has a much more focused scope. Even if the leash of In Other Waters might be tighter, it’s by no means too short. You’re able to explore quite a wide section of the ocean and spend your time finding new vistas or collecting new samples that help you study the alien life. I spent nearly an hour drifting between stone pillars, examining the aliens that lived on them. This was in almost the opposite direction to the objective, but the game still allowed me the time to do it. Likewise, you can use your time in the hub area to study the map and find places you might have missed earlier (the game generously tells you where you might find samples). 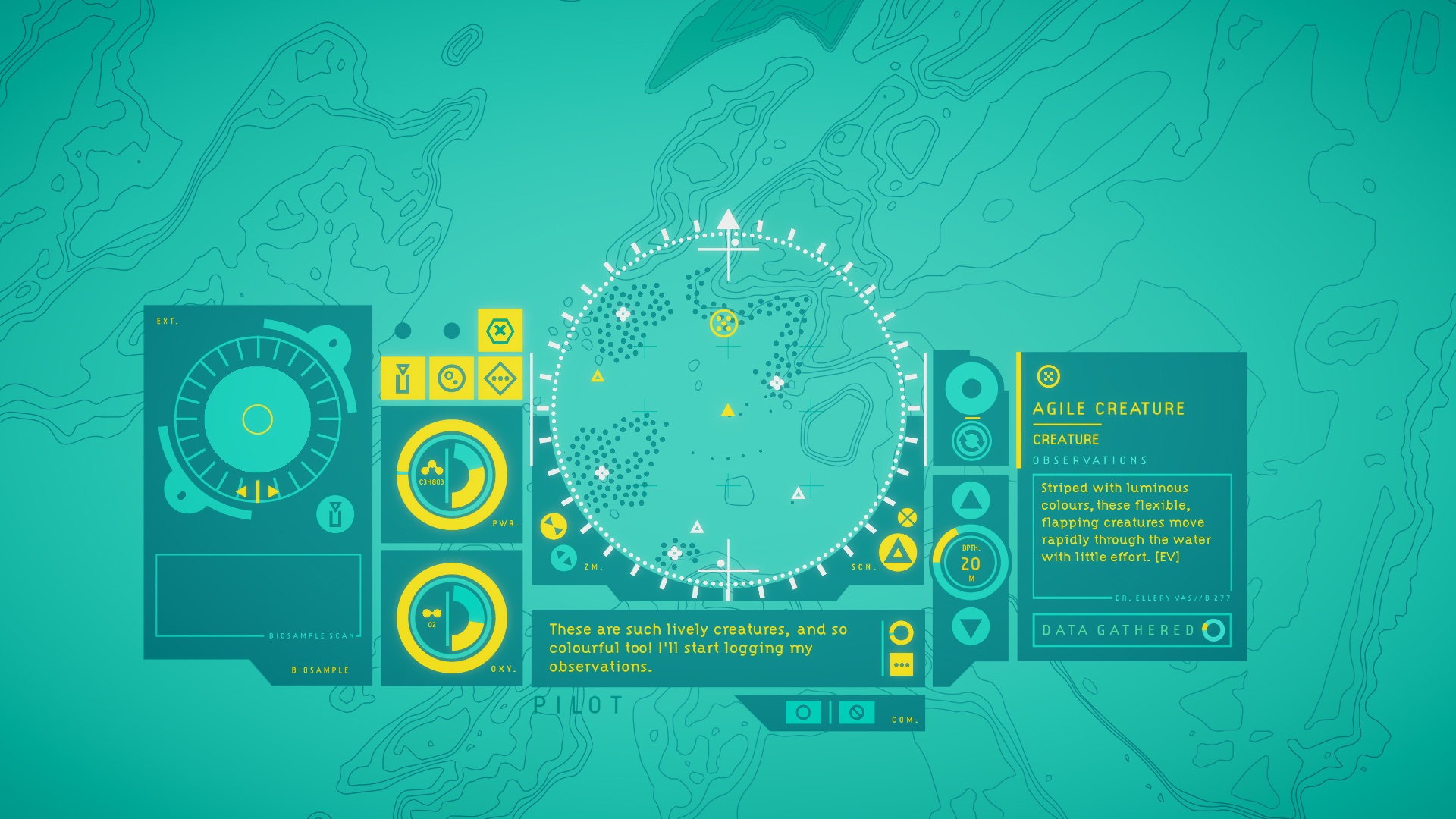 The controls can initially feel like they are hampering your urge to explore the ocean. Moving takes several mouse clicks as you perform all the necessary AI checks first. It might feel slow at first compared to similar exploration games that let you sprint from point to point without regard, but this really places you in the role of an AI performing an extraordinary duty. Scanning the environment, collecting samples, plotting a route and using your limited inventory all have their own on-screen buttons that make each action feel very deliberate. It’s a little reminiscent of games like Observation, but without ever taking direct control. One of the best things about In Other Waters is the way your interactions with the game directly echo the way the game presents your role, which really allows you to immerse yourself in the world.

A lot of the time, a game that doesn’t let you say what you want to say or do what you want to do feels limited or frustrating, but In Other Waters gives you enough freedom and enough of an explanation that you never feel unsatisfied by your options. When speaking to the scientist, you’re only ever given the choice of saying ‘yes’ or ‘no’. This makes your interactions fairly short, but her character still manages to shine through in the writing and it doesn’t take long for you to become fully engrossed in her personal mystery as well as the alien ocean.

Exploring those waters isn’t always easy though. Some areas aren’t as welcoming as others, with toxic blossom, powerful currents and tangles of tentacles all potentially blocking your path. You’ll never need to rely on your finely tuned reflexes, but the ebbing and flowing of the tension and peacefulness perfectly balance the game.

If I had to find a fault in this game, and this is really looking for something to complain about, I’d have to say that the inventory can be a little unintuitive. When looking through your collected samples, some information is only revealed when you click on the item. But doing so sometimes causes you to use it. It’s a minor issue and you’ll soon learn to recognise the item from its image, but it can be frustrating if you accidentally use a sample you were hoping to take back to the lab for study.

I’ve avoided talking about the current state of the world now, but I think In Other Waters couldn’t have come out at a better time. If you’re feeling restless and closed in, this alien ocean provides a much needed escape. It lets your mind wander and distracts you with its truly creative alien lifeforms, beautiful descriptions and intriguing mystery, even if you feel like you’re trapped in your own personal exo-suit.

In Other Waters is engrossing, beautiful and perfectly balanced both in terms of immersive gameplay and intriguing narrative. It's relaxing without being boring, and thoughtful without treading the same tired sci-fi tropes.