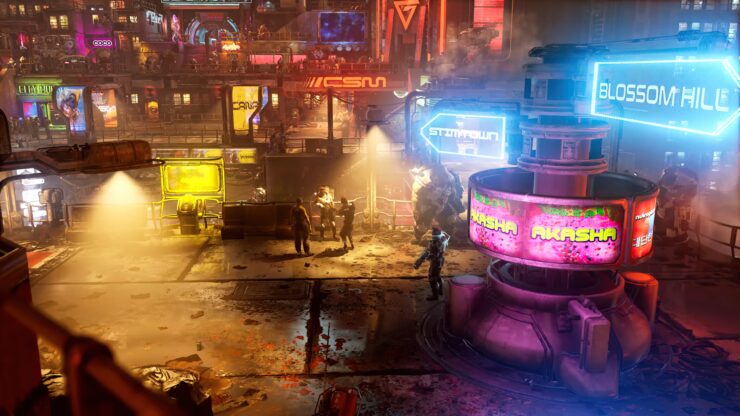 Few indie games can pull off an explosive debut as The Ascent did at the Xbox Series X showcase event in May 2020. Developed by the Swedish indie studio known as Neon Giant (founded by former Bulletstorm and Wolfenstein developers ), The Ascent impressed many right away with its blend of triple-A graphics production values and high-octane top-down shooting, a mix that we don't exactly see every day.

But The Ascent promises much more than that, including classic roleplaying elements like character progression and loot, four-player coop support, and the ability to freely roam (vertically as much as horizontally) a cyberpunk world called Veles where the dominant megacorporation has just collapsed, leaving a vacuum of power.

With the game scheduled to launch later this year on PC and Xbox consoles, we got in touch with Neon Giant's co-founders Arcade Berg (Game Director) and Tor Frick (Art Director) to offer you some exclusive info on one of the most exciting indie games in development.

How long have you been working on this game?

Arcade: Since day one of the studio. We just celebrated Neon Giant being three years old a couple of weeks ago, so three years it is! It’s been in development alongside building the studio, getting people on board, and all the other not-making-a-game parts of starting something new.

Would you say that The Ascent has been inspired by Diablo and other titles in that genre?

Arcade: We’ve taken inspiration from many many products out there. Be that games, movies, comics, and the like. But The Ascent is its own thing and one of the reasons we’re making it - is because we saw an opportunity to create and offer something you haven’t quite seen before. It’s a blend of action shooter mixed with RPG, narrative driven campaign with cutscenes and exploration, and very satisfying combat with covers and things going BOOM.

Many action RPGs these days tend to focus on replayability, adding procedurally generated elements to keep things fresh over an extended period of time. Will this be the case for The Ascent as well?

Arcade: We’re focusing on making sure that the experience you get playing through the game is the best it can be. We’ve used procedural tools outside of the game to help us create and curate the vast amount of content you can find in the game, but you play in a set world where a lot of loot and secrets are determined. Having said that, we do have additional systems on top for unique encounters happening in the world to make sure that when you travel through already explored areas you always have a chance of finding something new. We’re more interested in giving you the best experience, than a seemingly infinite one.

We've seen a lot of focus on ranged weapons in the gameplay videos. Do you also have melee weapons for those who want to get up close and personal, so to speak?

Arcade: All your guns are ranged at least to some extent, although one could argue that a five-barrelled shotgun works best within an arm's reach. For in-your-face-players The Ascent also has several abilities and modules that are close range, like a hydraulic-powered punch as the most direct example.

A lot of the gameplay footage released so far has focused on combat on The Ascent. However, does the game support non-violent ways to solve some conflicts and quests?

Arcade: On Veles, the world of The Ascent - problems are solved with ballistic persuasion.

Fair enough! How long do you expect The Ascent to last on average? Is there a lot of side content?

Arcade: It depends a lot on your playstyle and how much of the world you want to immerse yourself in. From what we’ve seen, playing through the Main Missions will land you somewhere around 15-20h. On top of that you have many more Side Missions, treasures to find and a myriad of Codex entries to unlock and read about the world and what’s in it.

Will there be many boss fights in the game?

Arcade: Yeah, there are a handful of bosses (what does that even mean?) in the Main Campaign - stuff we haven’t yet shown in any trailers or footage. There are also more “mini”-bosses guarding special loot or being part of Side Missions.

In a previous video, you mentioned that The Ascent would feature a 'living world'. What do you mean by that exactly?

Tor: We are putting a lot of effort into making the world feel like a real place, with everything from people going about their business and interacting with the world to traffic flying by. Random events taking place in the world, so when you return to a location you have visited before, things are slightly different, and things like that. The game takes place in a dystopian megacity, so the game and world required quite a lot of moving pieces to feel like more of a city, and not just a fancy static backdrop.

We really enjoy building worlds, and especially ones you can interact with, so we have tried to keep as much as possible in-world. You buy health packs from vending machines, which you can also hack or destroy. Vendors are not just a menu, they all have their handcrafted shops with things on display. Progressing in the story or completing Side Missions will have an impact on the world, areas will go from hostile to friendly, or vice versa. Things like that!

Can you share your approach to character progression and loot?

Arcade: Sure! We’re putting effort into providing a diverse enough selection of gear to cater to different types of players. Every weapon, armor, ability, tactical equipment, and the like are handcrafted with authored names, descriptions, stats, and functionality. We don’t rely on randomness and hope it’ll pan out well. The weapons are spread wide in their usage with some high precision, other spray and pray or a blast to the face kind of deal. There are also more exotic or excessive varieties. They can be upgraded with resources you find through the game and the more dangerous areas you get access to and manage to survive in, the rarer upgrade components you can find to upgrade them even further. You don’t find a pistol that’s the same but better than another.

Depending on where you allocate your skill points you get from levelling up (or by finding in the world) you also increase your Attributes which is what powers the augmentation abilities. Each ability has a scaling factor tied to one attribute. By placing your points accordingly, you can fire off more spray missiles in a single use, etc. Weapons, armors and other types of loot are spread out throughout the world, with more dangerous areas generally offering higher quality stuff. But there’s also a chance of fallen foes dropping items - so make sure to not try and just circumvent a fight.

Are you planning to expand The Ascent post-launch with DLCs/expansions?

Arcade: With The Ascent being a completely new IP and world - we’re always thinking bigger
than just this game, but our goal at the moment is to deliver the best possible experience at
launch and support the game immediately after. We want to take baby steps for our first
game and then we will see.

I know that you've already confirmed 4K and 60 frames per second on Xbox Series X. However, how are you optimizing The Ascent for the Xbox One and Xbox Series S? Can you share the target resolution, frame rate, and settings for these versions?

Tor: We are trying to cater to each platform as best as we can, in regard to tweaking settings
for maximising the visual fidelity. The different platforms have different strengths, and we
try to adjust as much as we can to get the most out of them, but all versions look and feel
similar and scale quite well. Resolutions and settings are in flux as we are optimising and
tweaking, so not final yet, but we are targeting 60 fps at 1440p for the Xbox Series S, 4K at
30fps for Xbox One X, and 900p for the Xbox One.

Since The Ascent runs on Unreal Engine, are you going to support NVIDIA DLSS on PC and ray tracing on PC and Xbox Series S|X?

Tor: We are in the optimization stage at the moment so we have not a definite answer on that. Having said that we are exploring all the latest technologies that allow us to deliver the best possible gameplay experience.

What do you think of Microsoft's Xbox Velocity Architecture designed for Series S and X? Will the game utilize DirectX12 Ultimate features such as Variable Rate Shading, Mesh Shading, and Sampler Feedback on Xbox Series S|X and/or PC?

Tor: The technology is awesome. As for the single features, see the above answers as we are constantly optimizing the game so is a bit premature to disclose all. As a small team of 12 people, we have to calibrate really carefully any change to make sure the overall experience reflects our vision.

Will there be cross-play between Xbox and PC? Also, is The Ascent going to be an 'Xbox Play Anywhere' game?

Tor: There will be crossplay between Xbox and the Microsoft Store PC-version, and it will
indeed be an “Xbox Play Anywhere” game.

Last question: I know it's been confirmed for Xbox Game Pass, but is that just for consoles or PC too?

Great! Thank you for your time.