Sable has been a long time coming. First announced by Shedworks all the way back in 2018, it has more or less consistently made it into our Most Anticipated Indie list year on year ever since. Now we can all finally stop anticipating it because it's here, and it's great.

Inspired by, among other things, the desert planet of Jakku in Star Wars, Sable is a game about exploring a fantastical desert landscape and chilled-out sci-fi culture. You play as Sable as she begins her Gliding, a rite of passage into adulthood where you must leave the comfort of your community and head out into the world in search of a mask that best reflects your personality, attitude, and ambition.

And that's what you do in Sable. You leave the smallish valley of your childhood, much like Aloy in Horizon Zero Dawn and countless other open-world games that hem you into a relatively small space for the tutorial and early stages of the game. From there you can head out in any direction, explore anything that catches your interest on the horizon. And there is so much that can do precisely that.

The game looks fantastic, like a surrealist comic book inspired through a haze of Star Wars and Dune and other sci-fi hallmarks that you're vaguely aware of. The landscape, seemingly barren at first, is so full of imagination and gentle, sandy beauty you can take a screenshot at literally any point and have a beautiful cell in your personal comic. You'll explore ancient ruins that lie half-buried, reclaimed by the desert or by nature. You'll encounter natural landmarks like great valleys and cliffs. You'll come across something otherworldly, tied to the world with a blend of technology and magic that becomes indistinguishable. And all of it looks fantastic. Even running upstairs in Sable has a sense of movement and awe that other – much grander – games fail to capture.

This is complemented perfectly with the game's art style and use of color. Sable looks like nothing else you can play, with something almost hand-drawn about it. Lines cut up the environment with block colors that express so brilliantly the feel of the object. And these colors shift too. As night falls across the world, the draw distance doesn't rush towards you. Instead, the colors drain from the world, leaving a shifting scale of blues and greys that offer an entirely different perspective on the expansive desert.

Because the world is big, or at least it's big enough. While it might not technically compare to the country spanning maps of Assassins Creed or other vast open-world games, it doesn't want to. This desert stretches, letting you spend plenty of time surfing the sand dunes in your hoverbike without leaving you with nothing to do or see. Riding is fun, so in Sable, you'll have plenty of time to do it. And the landmarks you want to explore initially are far enough apart that it feels like a journey to reach them. You feel like you're on a grand adventure when you're playing Sable, and that's what counts, not the actual square mileage of the game.

What you won't feel is a sense of threat or danger. Sable is a peaceful game, and other than some terrifying high falls – which can be entirely negated thanks to your feather falling bubble – you're always completely safe. This might put off some players, especially given the game's constant homages to Breath of the Wild, but this is a journey about exploration and self-discovery, not violence. It also means that the game's fundamental mechanics can be broken down into platforming and exploration, both of which are handled incredibly well.

When you're not pitching into the great blue sky on your bike or dashing across a vast sun-bleached ribcage, you might just be talking to the other wanderers of the desert. The dialogue in the game is simple, mostly talking to people to get quests and clues. But despite this, it is beautifully written. Prose breaks up the conversations to highlight expression, tone, and mood in a way that is often forgotten outside of the most word-heavy RPGs, and it works really well. You get a sense of Sable and the others by the way the game describes them, and it only ever takes a few lines to do it.

Any issues with the game are somewhat ironically superficial. As mentioned, Breath of the Wild was an inspiration to the game's quiet exploration, and it is most obvious in the stamina bar. Anything can be climbed, but it costs stamina, but unlike in BotW, Sable's stamina bar is much harder to read. This isn't because of bad design as it looks lovely – and the game lovingly keeps the screen clear of unnecessary noise unless you want to find it – but because the speed it decreases seems to change. The first few handholds cost almost half your initial stamina, while the last few inches of strength last longer than expected. I think the studio wanted to make climbing a bit more 'exciting' by having the bar constantly rest in the lower half, but it tends to just make it harder to learn how much you can climb.

The other issue, if you can call it that, is the bike. Once you've got your proper bike, with its proper name, you'll be gliding over the dunes with a sense of quiet serenity. The smoke of the first bike, as well as the coughing engine, are gone. But you might not feel as serene as you expect thanks to the comically spinning graphics. Your bike might attempt a barrel roll a meter from the fall, or shake uncontrollably as you pass harmlessly past some sedimentary stones. It doesn't affect the driving at all, but it can take a little something away from the experience, if only for a moment.

Sable is a fantastic game. In its own words, it gives you nothing to do, so you have everything to do in its sand-soaked landscape. It looks otherworldly and begs to be explored, with more adventures promised beyond every horizon. The story, or rather the exploration of the culture and history of the people you encounter, is fascinating and gives you as much of a reason to explore as the siren song of the distant landmarks. 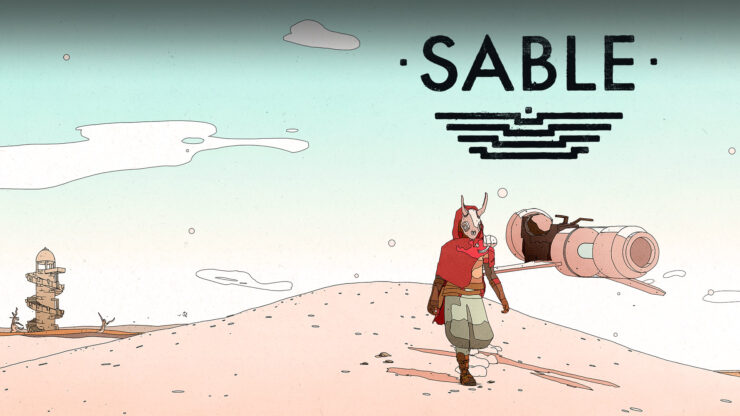 For those yearning to explore, Sable offers the chance to do it at your own speed, with your own goals, and without the need to exert violence or experience shocking twists. Sable is confident the world is interesting enough and is completely right in that regard.