Streaming has basically become mainstream over the past few years. From high-end GPUs to current generation consoles, streaming your games live to strangers over the Internet has never been easier. It’s no surprise that some people have taken streaming to a whole new level, turning a hobby into a full-time job. As you’d expect, these streamers have much higher production values than most people, so it’s no surprise Elgato have created the Stream Deck – a customizable LCD keypad designed to eliminate the need for keyboard shortcuts. However, while this device may be useful, at £140/$150 the price will certainly deter amateur streamers from even considering purchasing it. Does the Elgato Stream Deck do enough to justify the cost?

Featuring fifteen customizable LCD keys that can be used to organize your shortcuts into separate folders (giving you up to 210 customizable actions), it’s easy to see how the Stream Deck could be helpful when streaming. Launching programs, switching scenes and muting specific sources of audio in OBS can all be achieved by simply tapping a button. Creating actions using the included Stream Deck software is quick and easy: the software provides you with a preview of the Stream Deck that you can drag and drop icons onto. Every action you assign is updated in real-time so you won’t lose track of what you are doing.

Advanced/Partnered streamers will appreciate the integrated features for OBS, Twitter and Twitch.TV. I’ve already covered some of the OBS features, but it’s also worth mentioning that the Stream Deck enables users to tweet pre-set messages. The Twitch.TV integration is where this device really shines, allowing streamers to enable Subscriber-Only Chat and Slow Chat when things get too hectic. There’s also the option to monitor the viewer count as it updates on the Stream Deck in real-time.

All of these actions are incredibly useful when streaming as you never want to keep your audience waiting, and of course there is the added bonus of having the buttons customized with any image you’d like. Amateur streamers will know just how awkward it is when you forget your shortcuts mid-stream, and the Stream Deck sets out to avoid this issue entirely. Having everything displayed at your fingertips should prevent any mishaps from occurring. That said, professional live-streamers have managed to live without this product for some time now. What makes the Stream Deck better than the cheaper alternatives?

The advantages of the Stream Deck versus a regular keypad are made apparent at a first glance. The LCD buttons are far superior to any generic keypad as they don’t need to be labeled or memorized in advance. As someone that likes to alter my layout regularly, actually seeing the changes on the LCD panel make things a lot easier to keep track of. Keypads require you to set shortcuts/macros, as does the Stream Deck. The Stream Deck has the upper hand when assigning actions thanks to the integrated features with OBS and Twitch.TV, both of which are essential for streaming. Of course, all of this can be achieved with a keyboard and mouse, but it is nowhere near as convenient. You’ve also got the ability to set unique profiles just in case you need another 210 actions to mess around with.

Elgato have been targeting this device at streamers, showing off features like displaying memes or blaring random audio clips but the Stream Deck is far more versatile than they let on. For most people, having the device perform basic tasks while live-streaming will be enough to justify their purchase, but I can’t help but think that using this product for streaming alone seems a bit overkill. Pair this with any of Adobe’s programs and you’ll begin to see how valuable to Stream Deck can be in day-to-day use.

The build quality of the Stream Deck feels solid and seems unlikely to break. Sporting a clean, black finish, it should look at home on any modern desk. It also comes with an adjustable stand, though this is not as premium as we would have expected considering the price. I was also surprised to find that the USB 2.0 cable is not detachable and is very short, forcing those with setups far away from their decks to invest in a USB extension lead.

If you are reading this review, chances are you probably own a streaming PC and this is where the short cable may prove to be an issue. If your streaming PC is not right next to you, it’ll be difficult for you to be able to reach the Stream Deck when you are streaming. It would also have been nice for Elgato to have included a detachable USB cable as it would be far easier to detach the cable from the top of the Stream Deck when switching it between your normal and streaming PCs. This isn’t a deal breaker, but it would’ve made the whole streaming process more convenient.

It all comes down to the price of the Stream Deck and whether or not you feel like you need it. As an amateur streamer myself, I can see exactly why some people may laugh at the idea of spending so much money on something that can be done using your keyboard. It seems like such a luxury to a beginner who won’t do much more than changing a few scenes every now and then, but for advanced streamers, a device like this can prove to be very useful. I could live without the Stream Deck, but now that I’ve tried it I don’t want to.

Review unit provided by the publisher. You can buy it on Amazon. 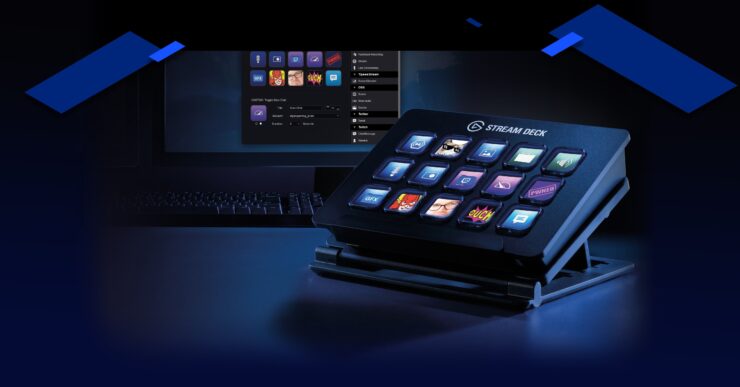 If you happen to stream a lot and reckon you can expand the Stream Deck’s functionality outside of streaming, then you should certainly consider this. However, don’t sweat it if you can’t justify spending so much money on something you can do with a few macros as you aren’t missing out on much.