The ASRock TRX40 Taichi features the latest Taichi design that we saw on the X570 Taichi. The board comes in a black and silver color scheme with gear logos and aesthetics spread across various heatsinks and I/O cover. Just as you can expect, the ASRock TRX40 Taichi rocks a very premium design and has an abundance of features packed on it. The motherboard has a 16 phase (Intersil Digital) PWM which is rounded by the top of the line components such as premium 90A Dr. MOS power chokes, premium memory alloy chokes, Nichicon 12K black capacitors, and a matte back 8-layer PCB with 2oz copper design. 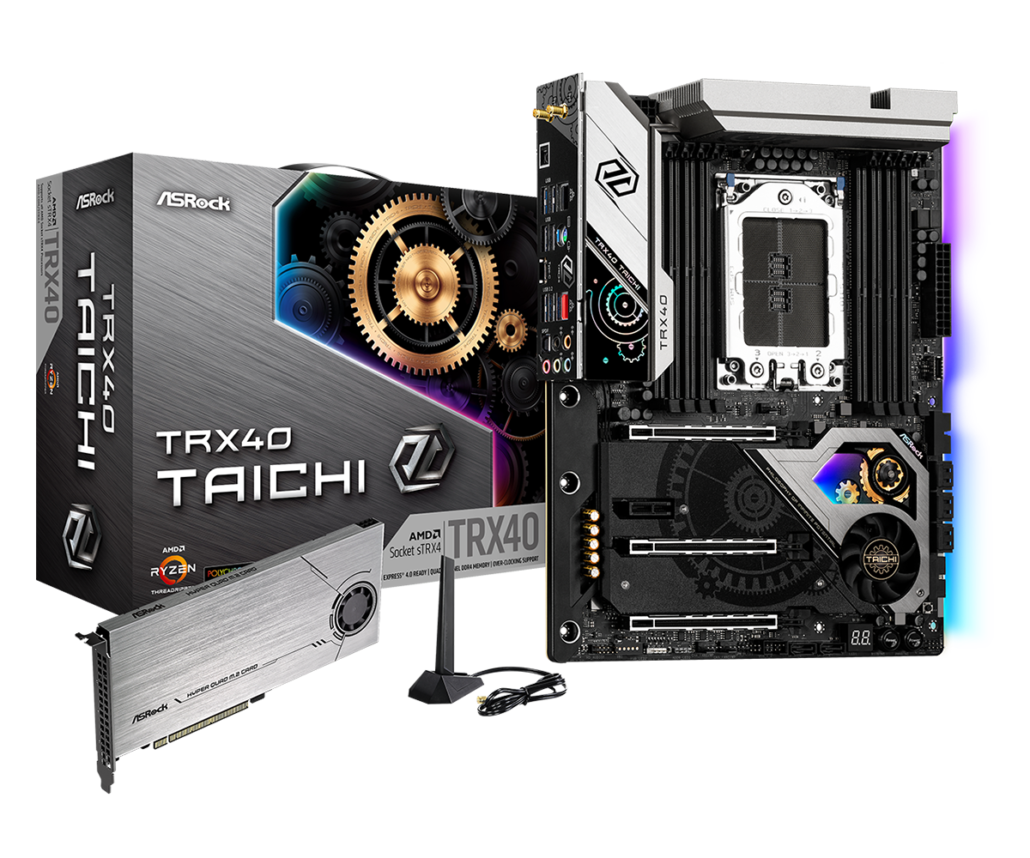 The CPU socket is powered by dual 8-pin connectors and the whole VRM area is cooled off by one large XXL aluminum alloy heatsink that is accompanied by dual cooling fans. This along with the added Heatpipe transfer heat from the VRM area to the heatsink near the I/O which absorbs most of the heat. There are eight DDR4 DIMM slots that can support up to 256 GB of capacity with speeds of up to 4666 MHz (OC+).

The motherboard also comes with three PCIe 4.0 x16 slots (x16, x16, x16 electrical) and a single PCIe 4.0 x1 slot. The three full-length x16 slots are reinforced by steel shielding. There are two Hyper M.2 slots and 8 SATA III ports for storage devices included on the motherboard. Other than that, all M.2 slots can be seen hidden beneath the front motherboard cover. Additional ports include a USB 3.2 Gen 2 Type-C front-panel connector, power on/off switches, a reset switch, DEBUG LED and a couple of USB 3.0 front panel headers.

The interesting thing about this board is that it comes with the Hyper Quad M.2 AIC which allows for four additional M.2 devices to be added on an external card which comes with its own active cooling. There's also active cooling on the PCH heatsink which also includes the fancy gear design seen on the new Taichi boards. The I/O on the motherboard includes the following: