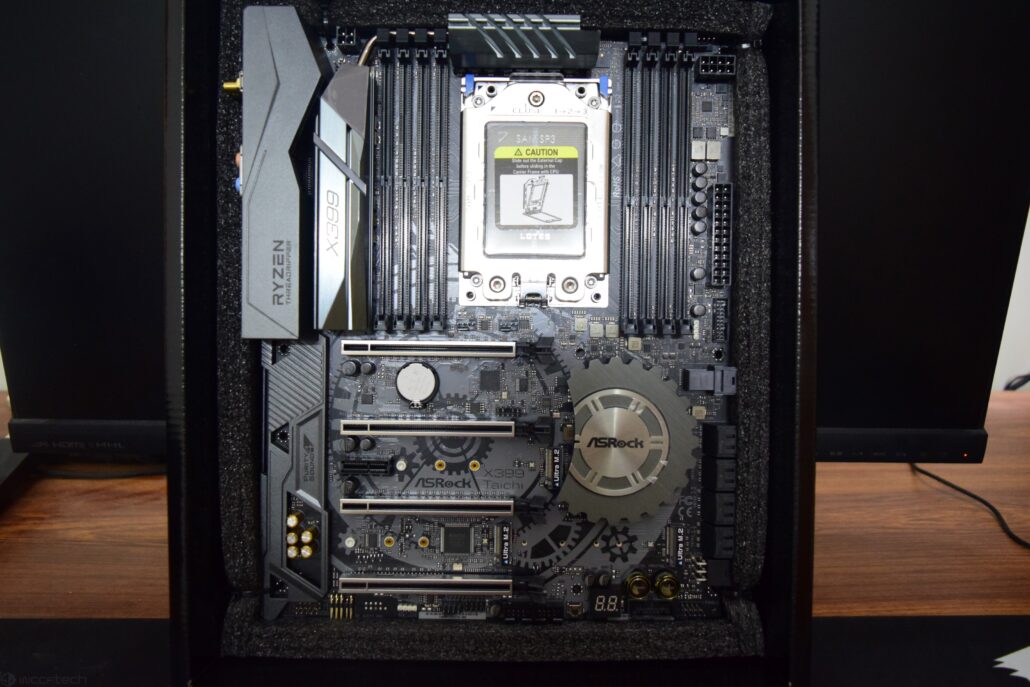 The motherboard comes with a simplistic design language that follows ASRock's Gear design as seen on previous Taichi motherboards. ASRock has chosen the grey and black color scheme for this motherboard and it looks great. 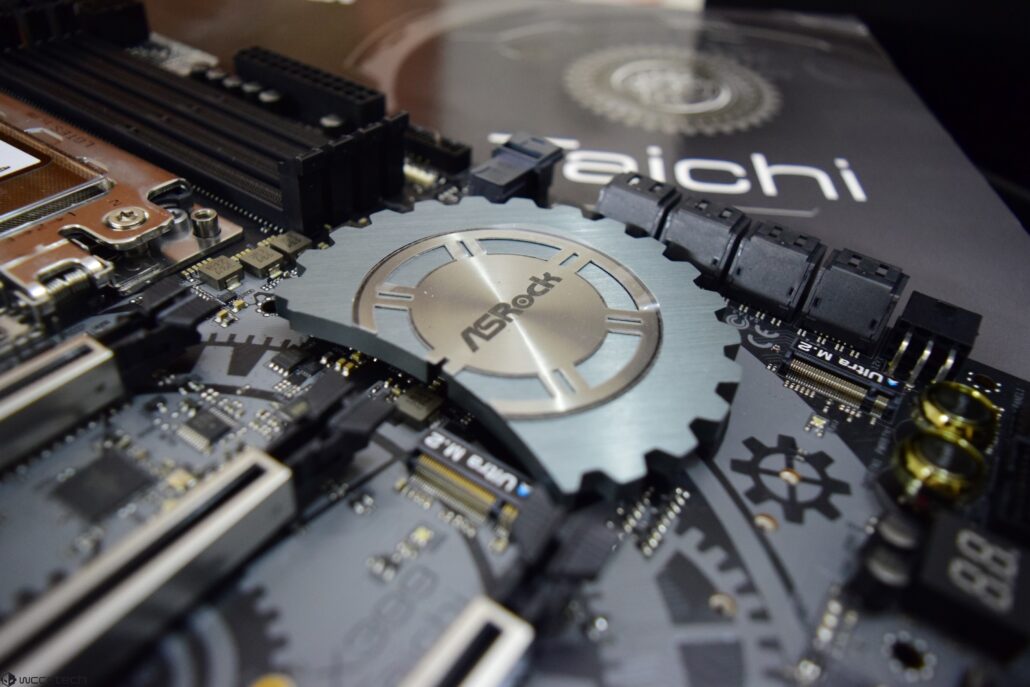 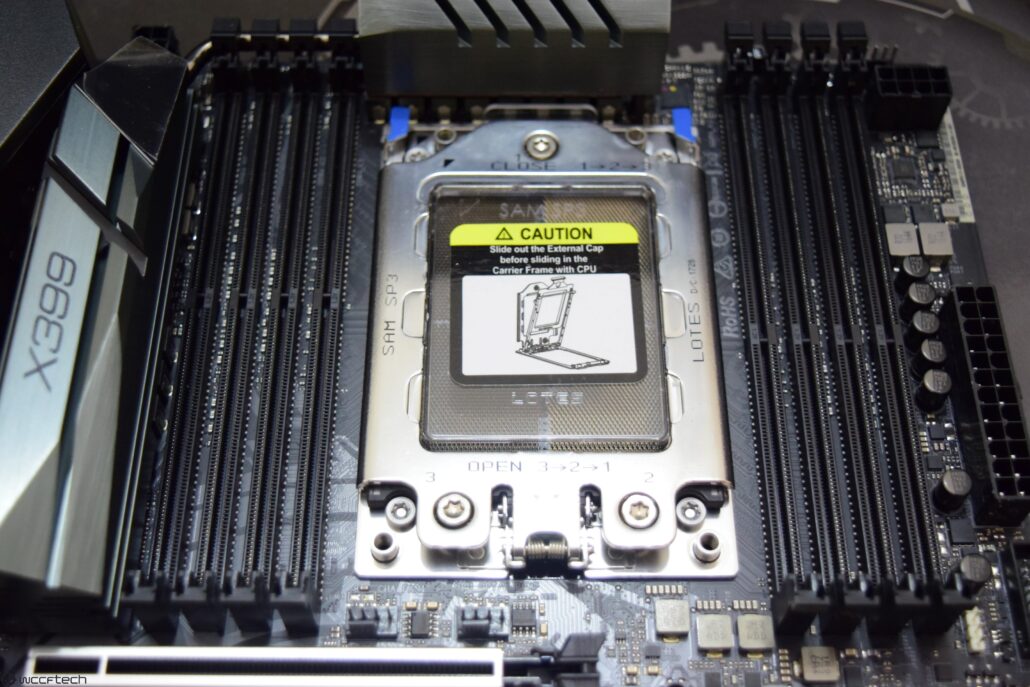 Talking about the socket, it is also the largest ever designed for a consumer grade motherboard and the number of pins inside the socket are mind blowing. You can fit in almost four consumer Intel CPUs in the socket (although they won't work). 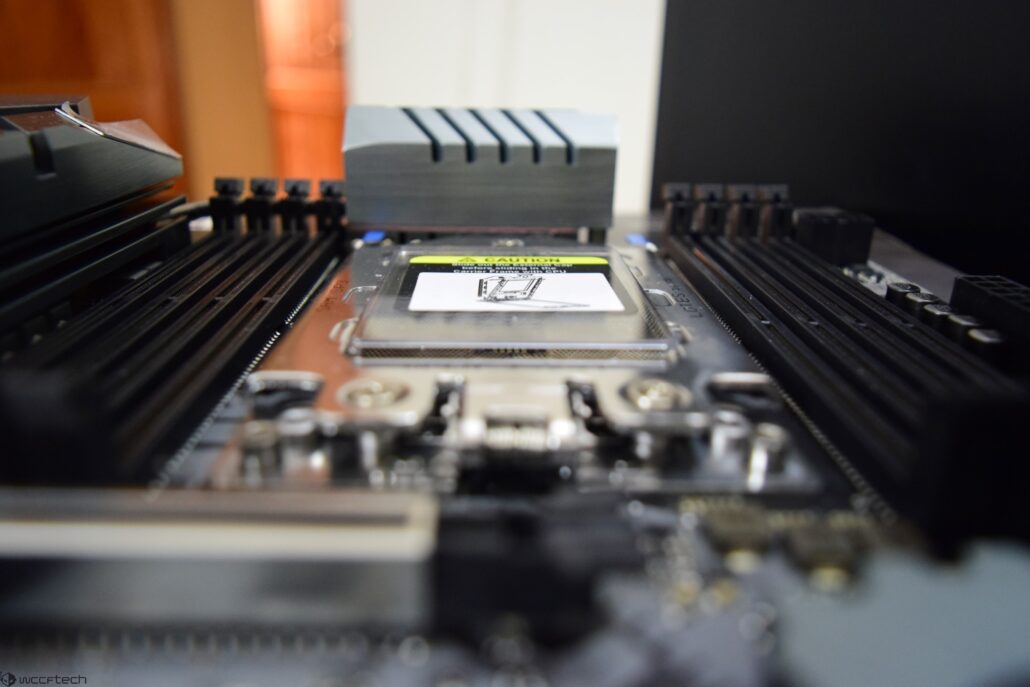 Around the socket are four DDR4 DIMM slots which can support quad channel memory with clock speeds up to 3600 MHz (OC+). The system is designed to operate both non-ECC and ECC (UDIMM) memory and up to 128 GB in capacity. 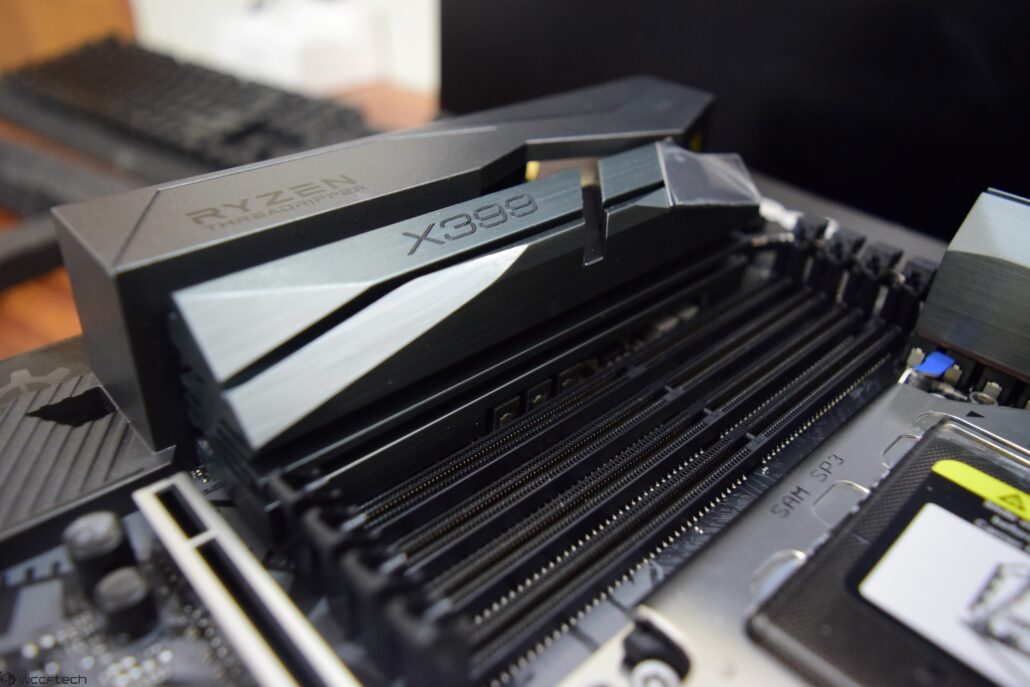 Scattered around the CPU socket are 11 power phases that use the IR Digital PWM unit for voltage and power regulation. The motherboard is based on the ASRock Super Alloy technology that has a range of features including 60A Dr.MOS power chokes. 12K black capacitors, a high density glass fabric PCB and premium alloy chokes for the memory too. 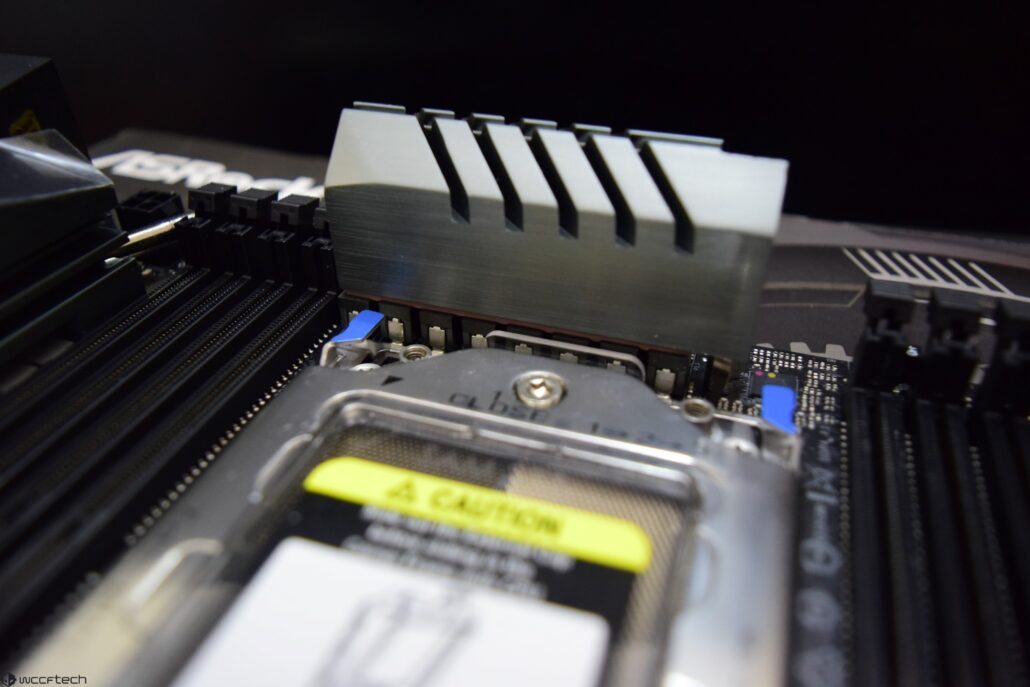 The motherboard is supplied power through a 24 pin ATX connector while the CPU socket is ran by a 8 and 4 pin power configuration. This is enough to feed juice to the high-end Ryzen Threadripper CPUs. Overclocking would be a breeze on high-end motherboards of this design. 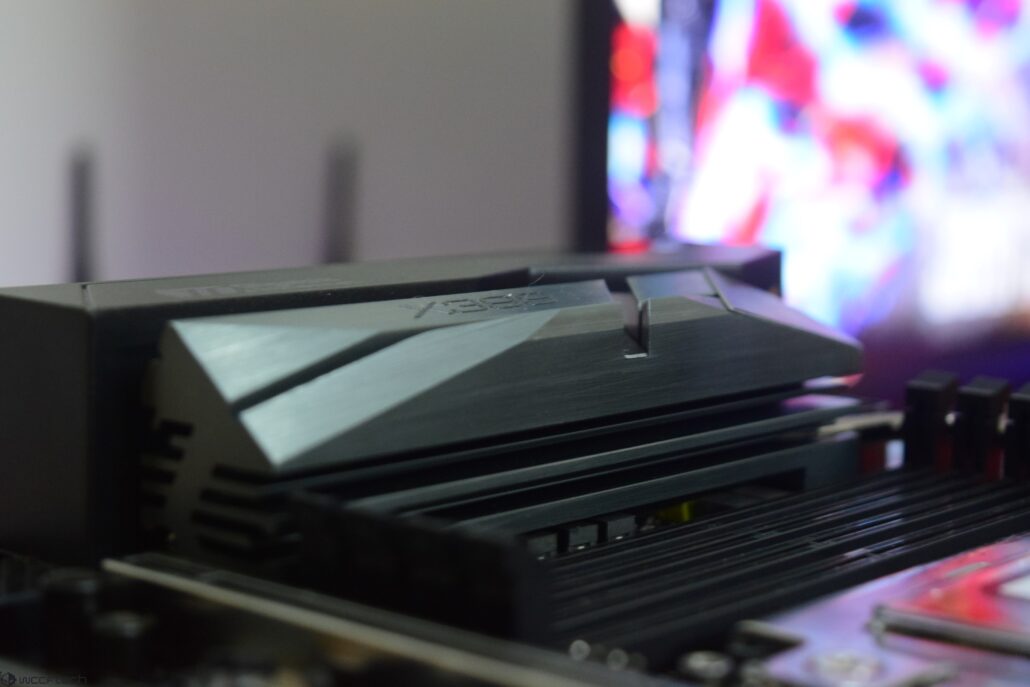 The motherboard uses premium aluminum metal heatsinks that make direct contact with the VRM and also include copper heatpipe design to channel heat. This effectively leads to better cooling on the motherboard. 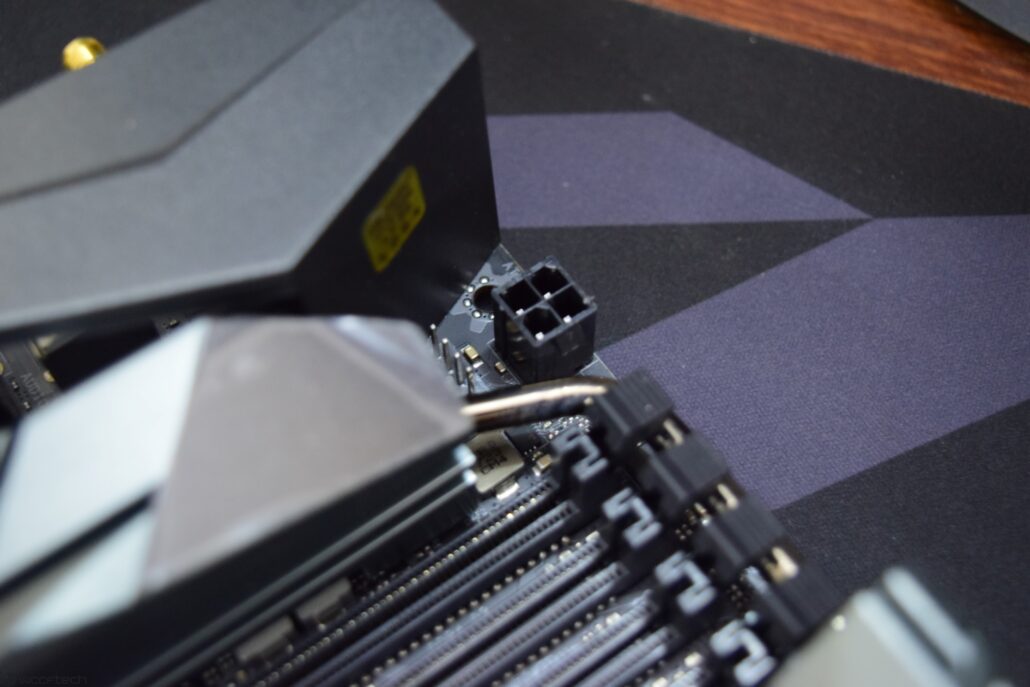 The AMD X399 chipset is hidden beneath a large Gear designed heatsink which is etched with the ASRock label. This is a fairly big heatsink which embeds ASRock's RGB LED feature that can be tuned via their bundled software. 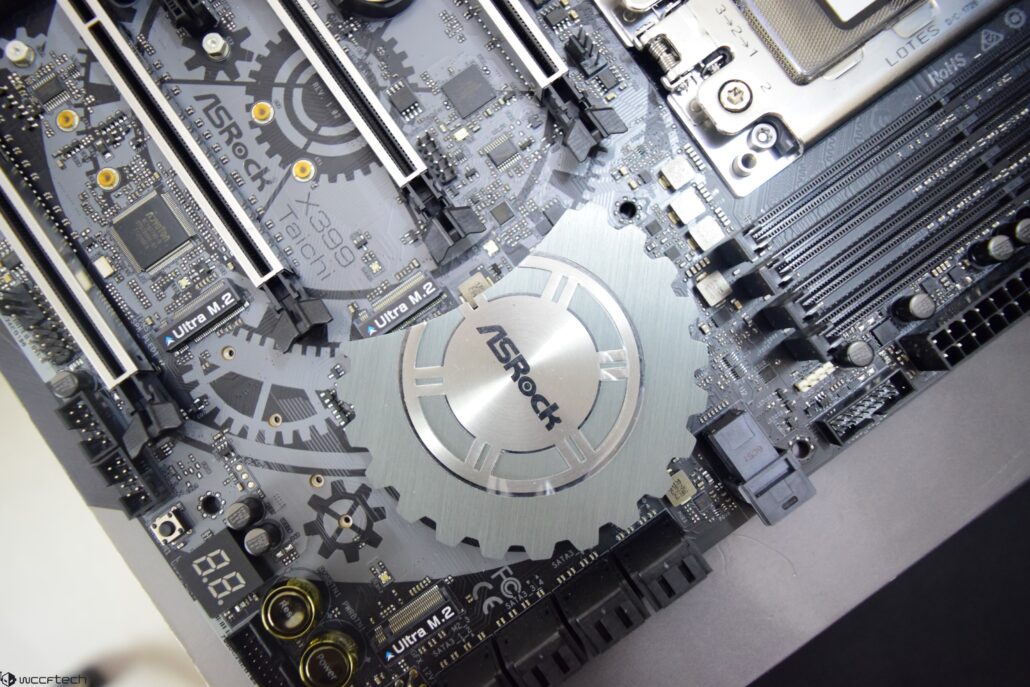 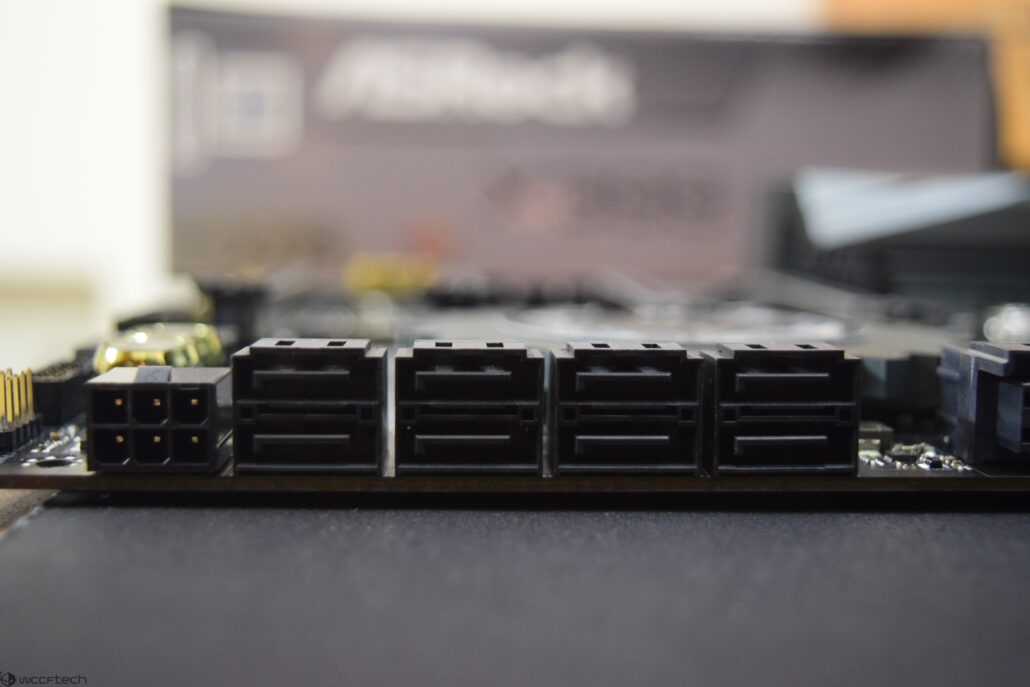 There's also a single U.2 port if you are running an Intel SSD with U.2 design although that doesn't seem much of a case nowadays with M.2 in the lead. If a U.2 is connected, that will lead to one M.2 slot being disabled. 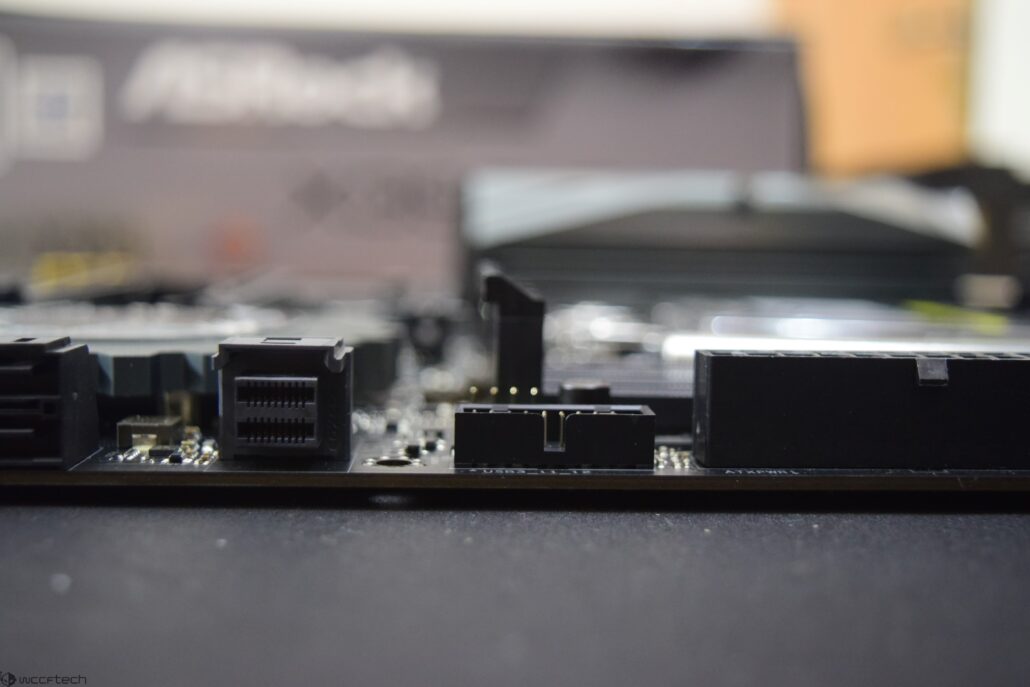 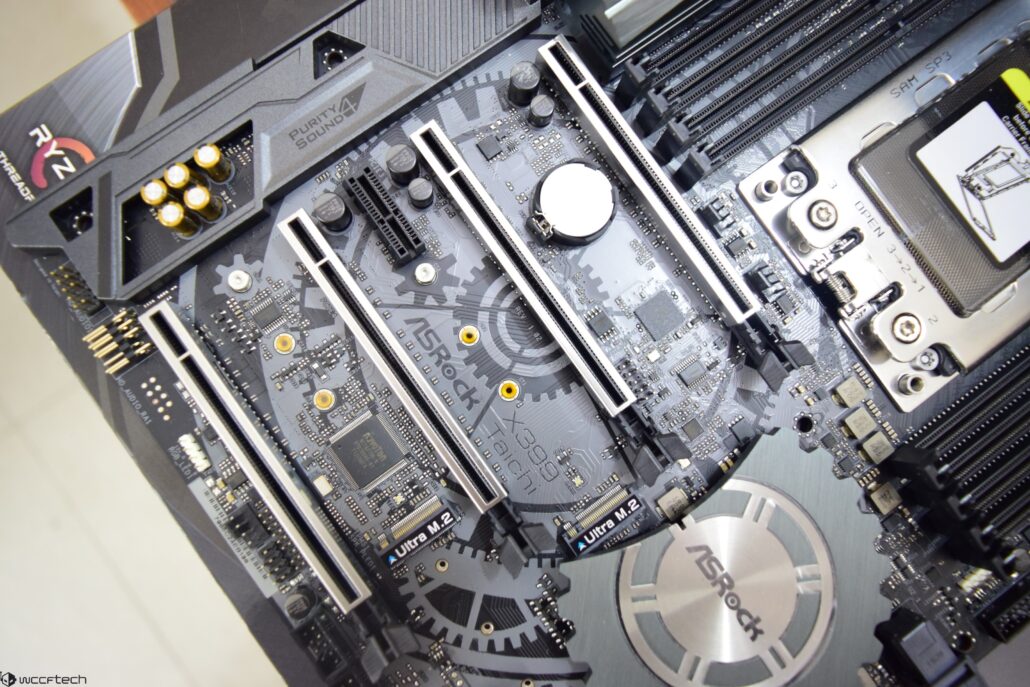 The motherboard can house four way SLI and Crossfire GPUs and there is an additional 6 pin power connector on board the motherboard which can be used to deliver additional power to the PCI-express slots when all of them are populated at once. 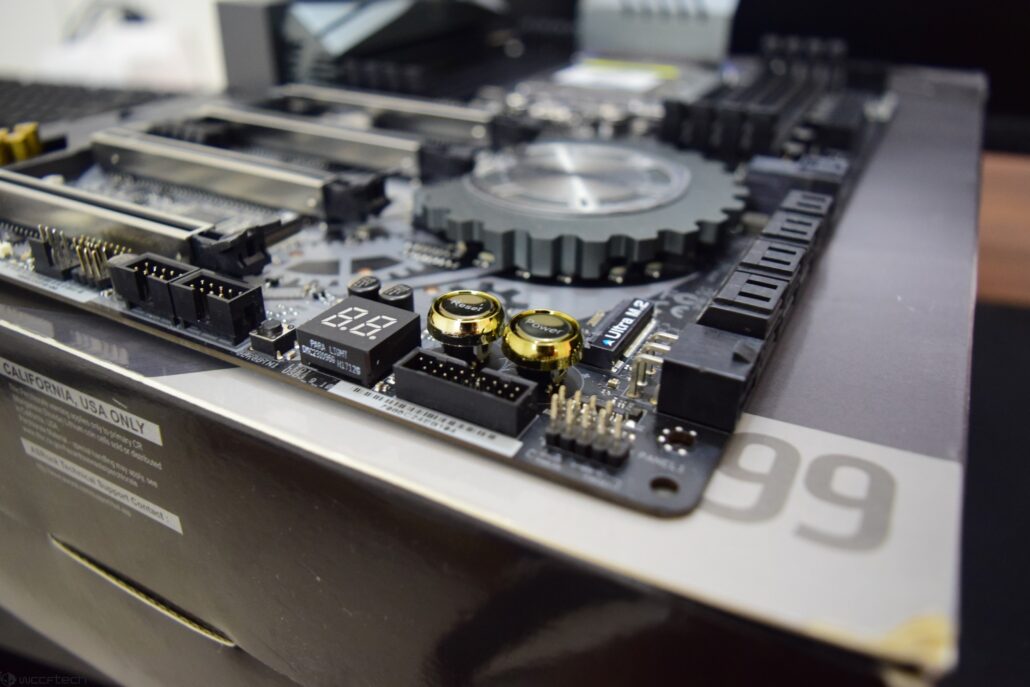 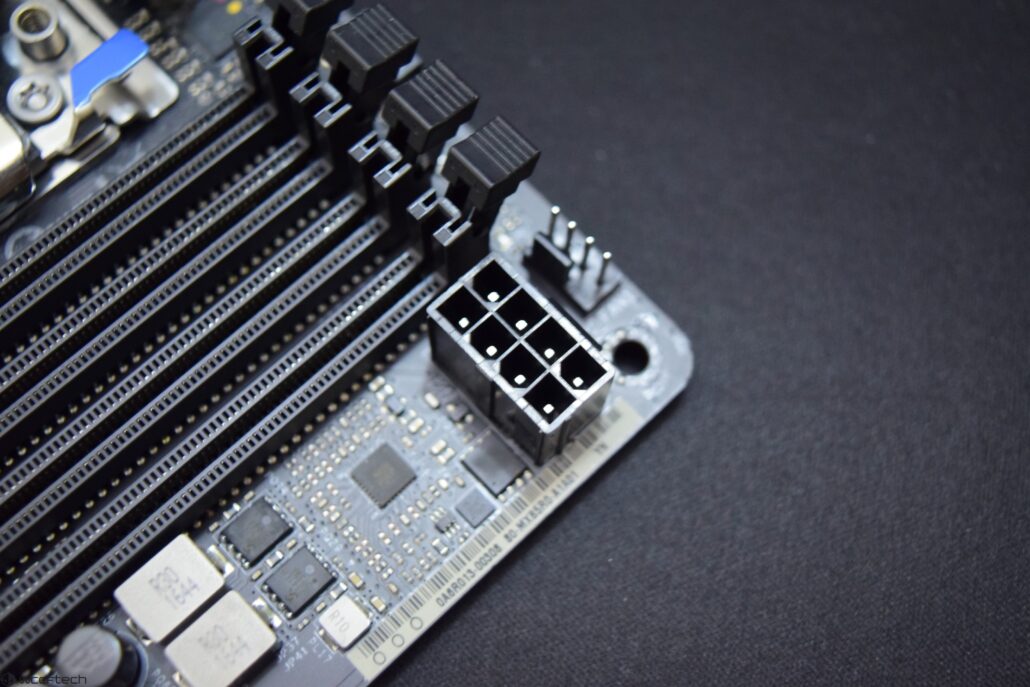 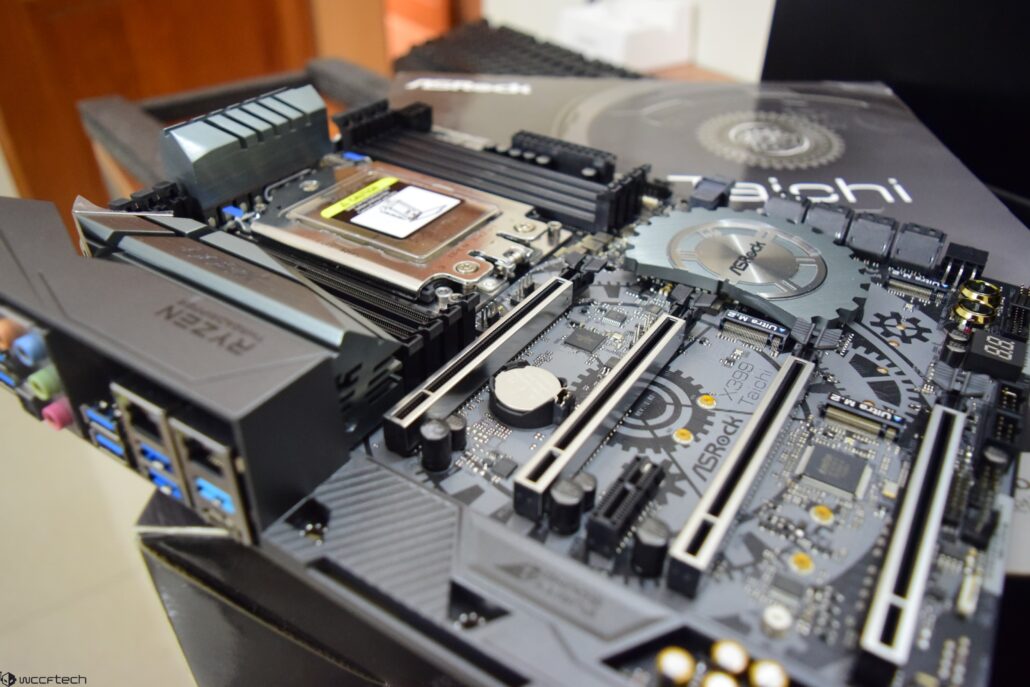 The I/O port comes with a shielded cover which reads Ryzen Threadripper on the top. Similarly, the heatsink next to the I/O cover reads X399 and they look great. 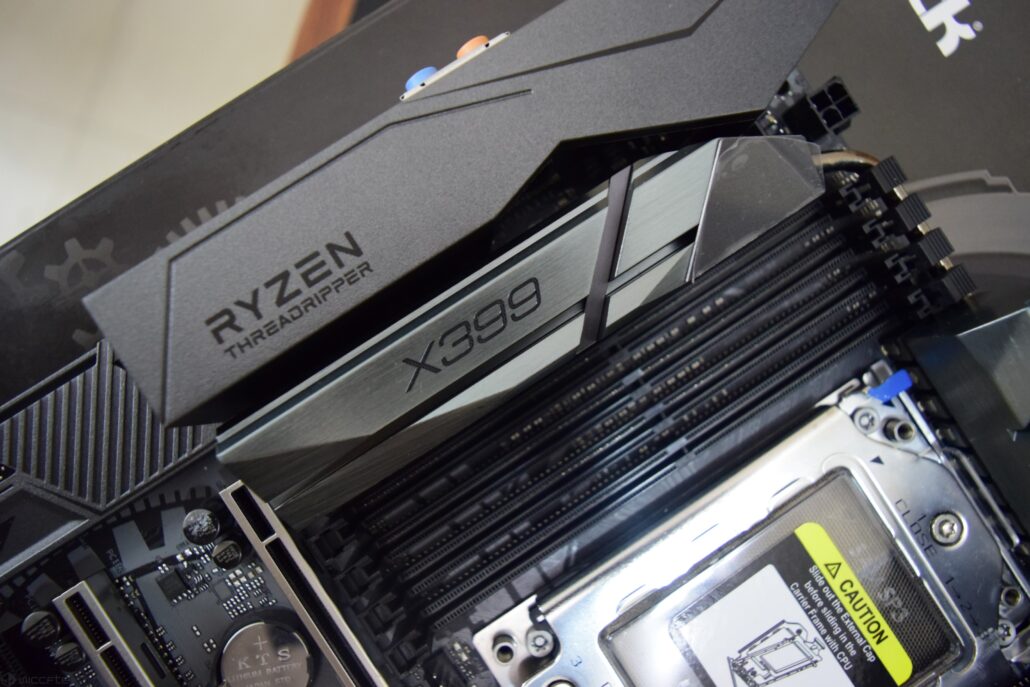 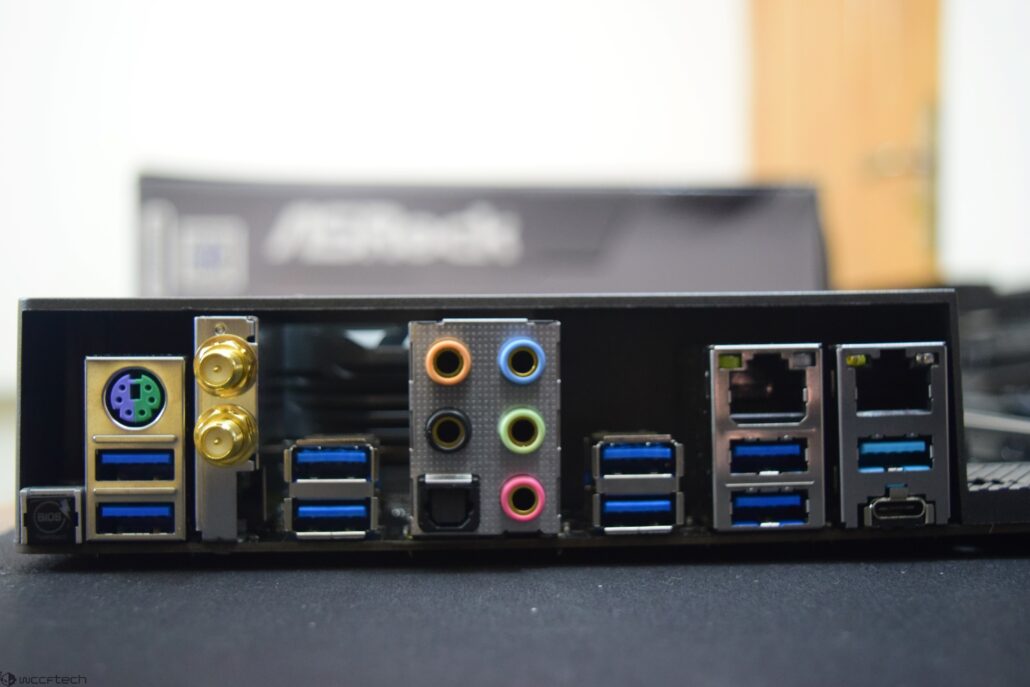