The ASRock X399 Taichi is an impressive motherboard in terms of cost and performance. It is right now the lowest priced X399 motherboard in the market but packs all the bells and whistle that you can expect from the higher priced motherboards. Sure it doesn't has as much RGB bling as those $400 US+ X399 motherboards but in terms of specifications, you aren't missing everything. These features include quad channel memory support with up to 128 GB capacities and speeds of 3600 MHz+, 64 PCIe Lanes scattered across the PCI-e slots, M.2 slots and U.2 port, 8 SATA 3 ports and a powerful VRM supply.

The thing I loved about this motherboard series from ASRock is that they are keeping the bulk of cooling and PCB technologies same on Taichi and Professional Gaming. The heatpipe embedded VRM cooling system is intact and the motherboard has a very neat gear design that we have come to know on Taichi motherboards. 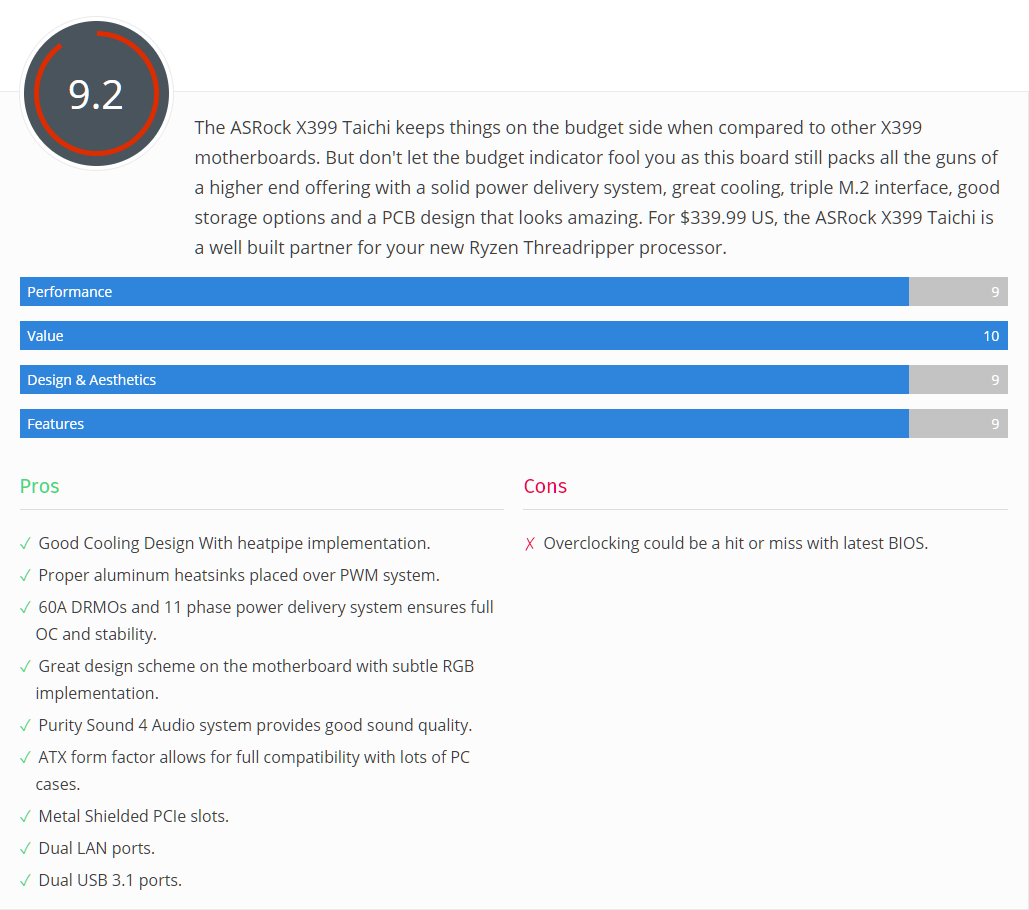 The ASRock X399 Professional Gaming on the other hand takes things up one notch, besting the Taichi in terms of features and slightly in terms of design too. You do end up paying $100 US more over the Taichi but $439 means that you can get a solid motherboard with dual USB 3.1, 10 GB/s Aquantia LAN and the same wireless options as the Taichi. You also get a slight bump in the inter grated audio system with Sound Blaster Cinema 3 implementation but the main take away is that this motherboard is very much a workstation design for Threadripper. 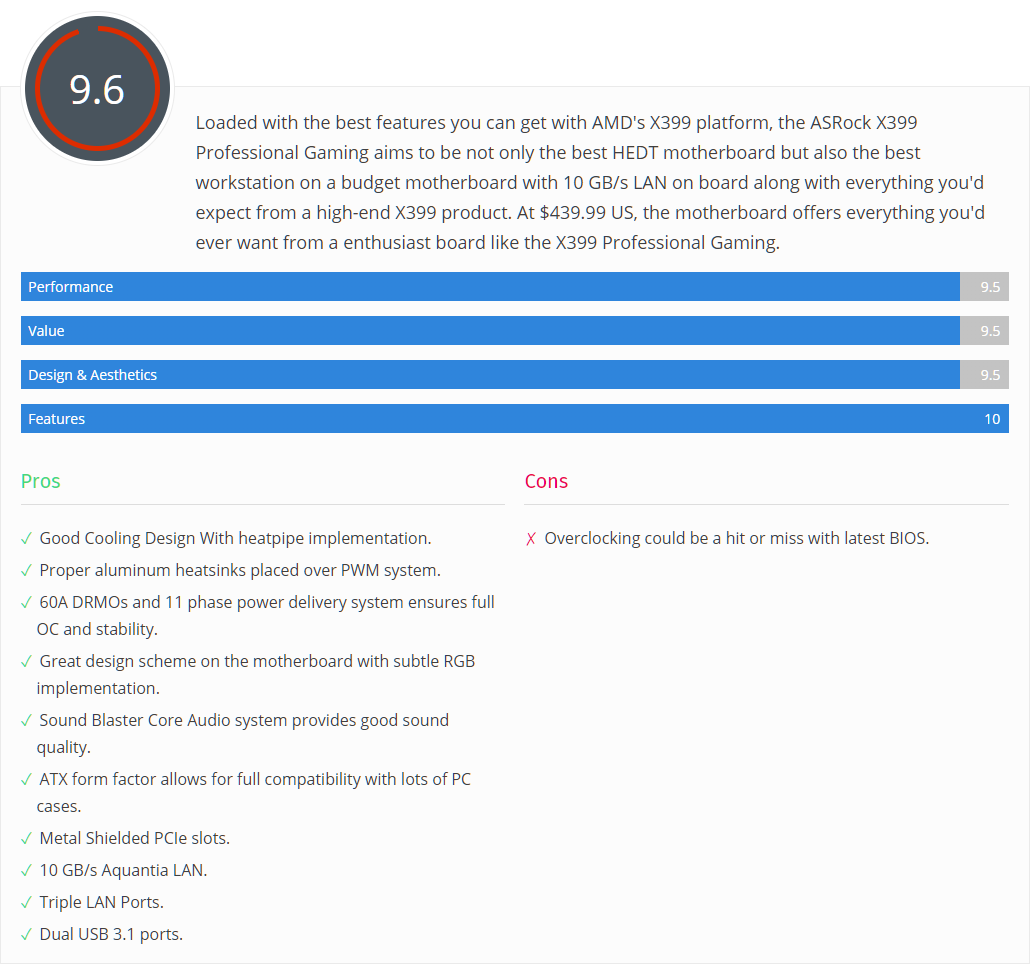 Finally, we have the star of the show, the Ryzen Threadripper series. For this particular review, I used my Threadripper 1920X processor which turned out to be a fantastic bang for buck at just $799 US. Yeah, the price is high if you are comparing it with the mainstream lineup but if you compare it with Intel's own 12 core chip, that one costs $1199 US and their 10 core chip costs $999US. The AMD Ryzen Threadripper absolutely obliterates the 10 core offering in CPU intensive tasks at the given price point and delivering better thermals and power efficiency figures.

My only concern with this chip was the gaming performance which solely depends on the level of optimization the developer has put in for higher core count chips. In that regard, Threadripper is requiring lots of optimization but at the moment, we have to live on with the monthly updates from motherboard vendors and AMD themselves. AMD's X399 is still an infant platform but in a short time, it has disrupted the HEDT market with it's fantastic ripping performance. 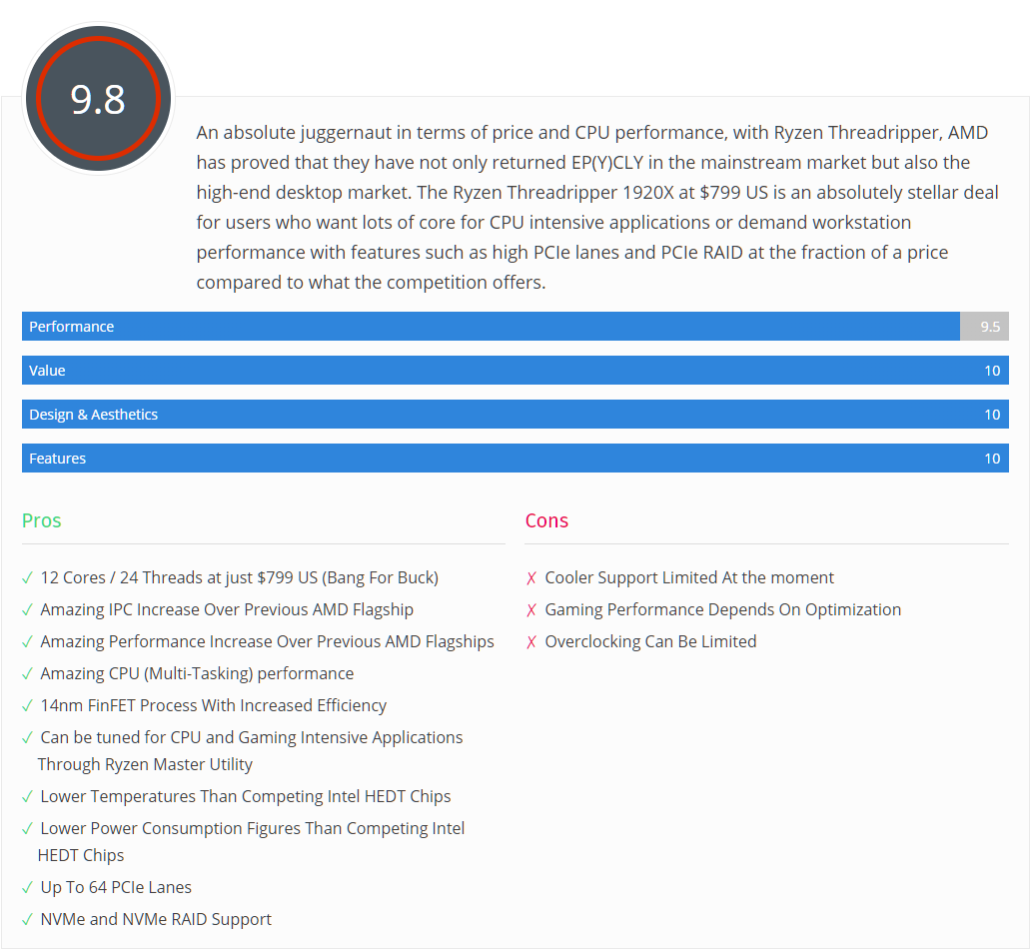 An absolute juggernaut in terms of price and CPU performance, with Ryzen Threadripper, AMD has proved that they have not only returned EP(Y)CLY in the mainstream market but also the high-end desktop market. The Ryzen Threadripper 1920X at $799 US is an absolutely stellar deal for users who want lots of core for CPU intensive applications or demand workstation performance with features such as high PCIe lanes and PCIe RAID at the fraction of a price compared to what the competition offers.