Resident Evil Village might not release on the last-gen consoles if a new Brazilian rating is to be believed.

Capcom’s upcoming new Resident Evil installment has only been officially confirmed for a release on PC and the next-gen consoles, but during Tokyo Game Show 2020, the game’s development team seemingly confirmed that they are trying to bring the game to PS4 and Xbox One as well.

As said, the last-gen versions of Village haven’t been officially announced by Capcom, but new-age ratings for the title might suggest that the title won’t see the light on Sony’s PS4 and Microsoft’s Xbox One. At the moment of writing, the Brazilian Advisory Rating System has only listed the game for PC, PS5, and Xbox Series X|S with ratings for the last-gen consoles being absent. Down below you’ll find a screenshot of the ratings (as taken today): 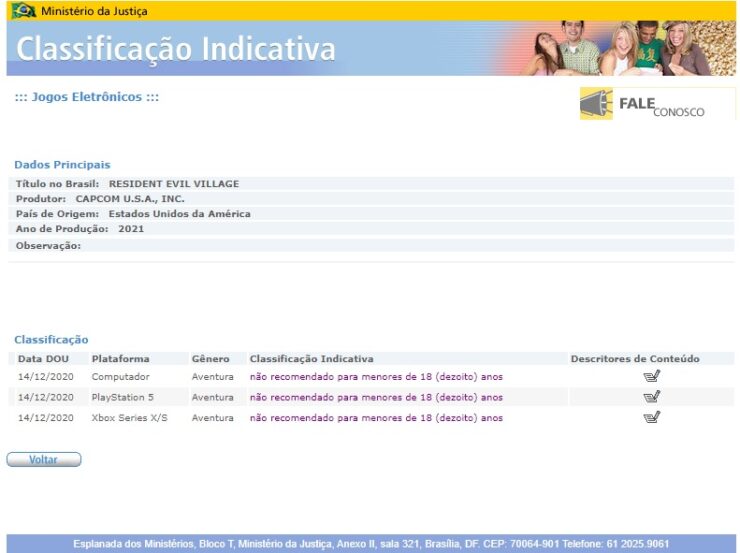 Of course, there’s the possibility that Capcom intends to officially announce the last-gen versions of Village later on with ratings surfacing following that announcement.

In other news about the game - three new screenshots were posted by IGN, which you'll find below.

As always, we will keep you updated as soon as more info on the game comes in. For now, check out the creepy new trailer that Capcom released back in September of this year.

The next generation of survival horror rises in the form of Resident Evil Village, the eighth major entry in the Resident Evil series. With ultra-realistic graphics powered by the RE Engine, fight for survival as danger lurks around every corner.

Years after the tragic events of Resident Evil 7 biohazard, Ethan Winters has started over with his wife Mia, finally living in peace and putting the past behind them. However, Chris Redfield, the legendary hero from previous Resident Evil games, suddenly disrupts their life, throwing a devastated Ethan into a new and twisted nightmare in search of answers.

Resident Evil Village is slated for a release next year on PC, PS5, and Xbox Series X|S. Last month, we reported that leaks suggested that the title will be released in April 2021. Interestingly, these leaks still mentioned the PS4 and Xbox One versions.

For more information about RE Village, be sure to check out the game's official website.