Resident Evil is back! If you've missed our review of Resident Evil 7 make sure you check it out.  But this part is all about PC performance.  Not only is Resident Evil back in a big way it brings a new graphics engine along for the ride.  The RE Engine was developed to target accelerating work loads between people working on the same project, but how does the performance shake out in the end.

We've put our X99 Test System to use again with this one using the latest drivers from both Radeon (17.1.1) and NVIDIA (378.49).  Both of these drivers are publicly available and recommended for Resident Evil 7.

All of the settings that were used are being shown in the images below, the only changes we made were adjusting the resolution.

The segment we used to test performance can be found in our video version of this PC Performance Showcase. 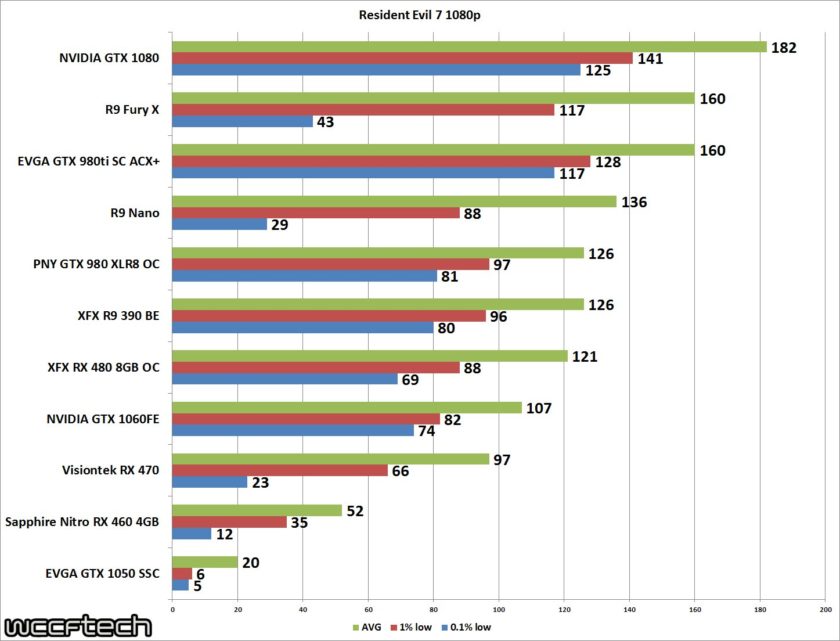 I was really surprised to see these settings pounding on cards with 4GB of VRAM so hard, it left me worried about upping the resolution.  Of course reducing settings would allow some overhead and give these cards room to breathe and is much encouraged.  Unfortunately the 2GB of VRAM on the GTX 1050 left it completely out in the cold when trying to run at these settings.  But even more unfortunate is the Fury line performance, sure the AVG FPS looks great, but the .1% lows are enough to completely ruin the experience. 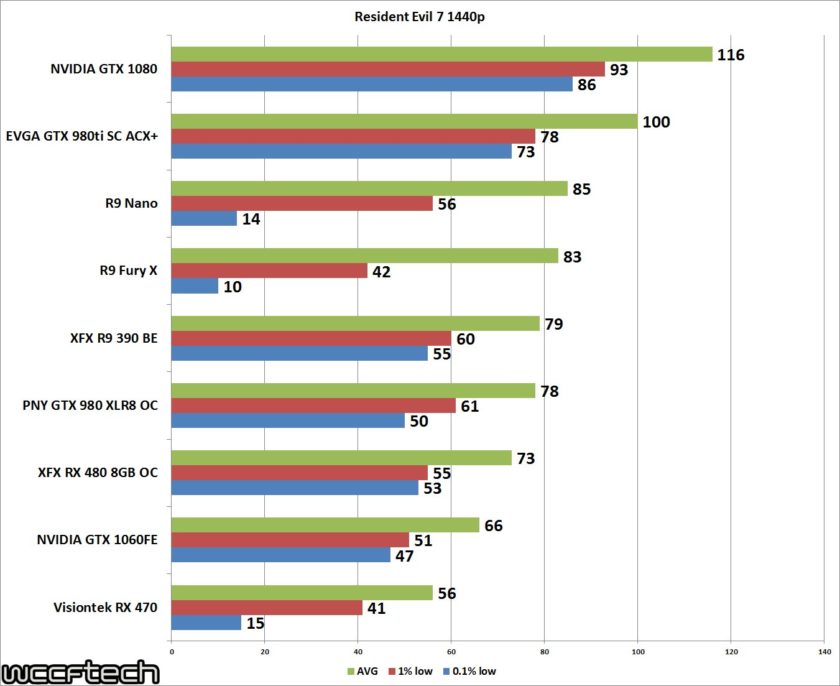 VRAM is obviously a big factor when playing this game at higher settings.  Once again we see great averages on cards with 4GB but the lows are abysmal.  Looking at the fact that the GTX 980 isn't suffering quite so bad gives me hopes that for Radeon owners a bit of this may be able to be helped along through drivers.  Since this is a TWIMTBP title and Radeon got their driver out a week earlier than NVIDIA there may be some room left for improvement. 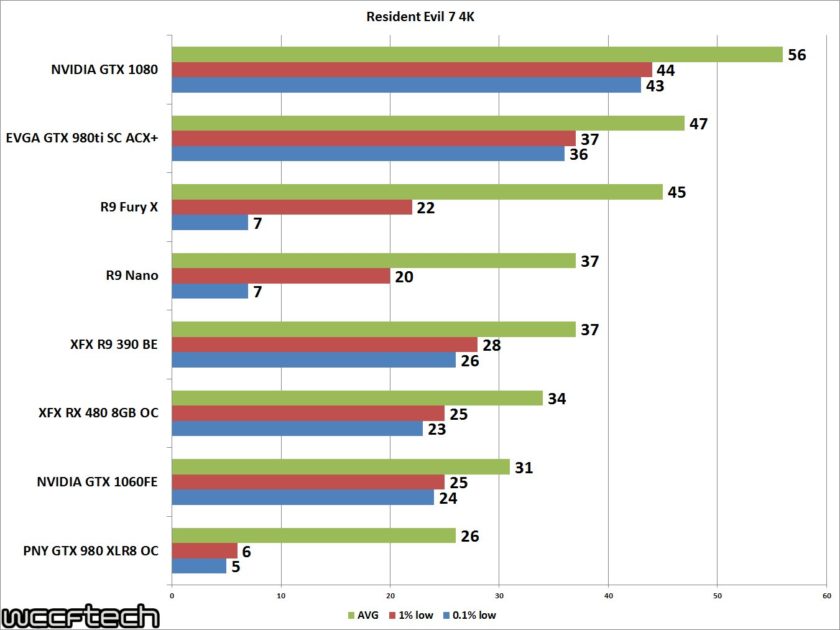 Whew, if you had your heart set on this game with heavy settings running at 4k, well....you better be packing some heat.  The GTX 1080 does it rather well since this type of game feels good at 45fps and up.  Less than that however you're looking at dropping settings in order to get the FPS into a playable range.  This is where the R9 390 shows its raw meat paired with VRAM can still stand up and take some punches, even pulling a more enjoyable experience than the beefy Fury X thanks to its 8GB of GDDR5.

Resident Evil 7 is as fun as it is gorgeous.  Unfortunately you're going to have to be mindful of your VRAM with this title and may have to miss out on some rather stunning eye candy in order to get below that threshold.  If you're packing 6GB or more of VRAM then you'll just be leveraging your GPU core, but less than that and even the Fury line is needing to take a knee to keep this one smooth.  I hope this helps some people out there who were wondering what to expect performance wise with RE 7 and if you're out there playing it remember to keep a light on.

I wanted to come back and revisit something after seeing a user comment, yes I read as many of them as I can. Someone mentioned that none of the 4GB cards were tested against an 8GB variant to see if it was genuinely a VRAM limitation or the limitation of the card itself.  Thankfully our RX 480 is more than flexible since we found early on that it unlocks with no problem.  So, I flashed it back to the 4GB BIOS and off we went.  Testing at the same settings at 1080p we found that indeed the VRAM limit of 4GB was very much the culprit.  I know the 8GB is an 'OC' BIOS but we're talking 22MHz here so nothing substantial. 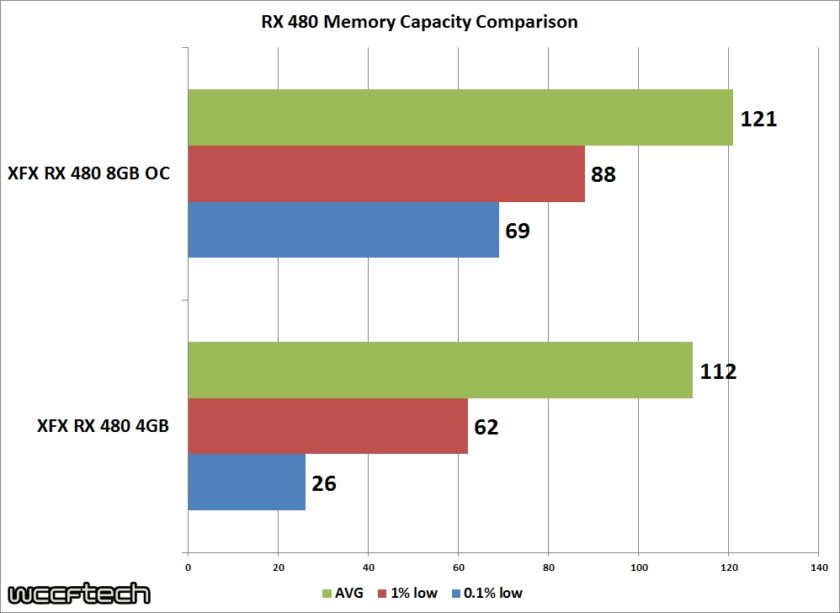 Now as for the matter of Shadow Cache.  This is simply a method for the game to cache static shadows into the graphics card memory rather than swapping from your storage.  It can help the overall experience of the game by limiting load streaming when transitioning between areas in the game.  But, it does have a significant impact on graphics cards with 4GB of VRAM or less, and I highly suggest disabling it. 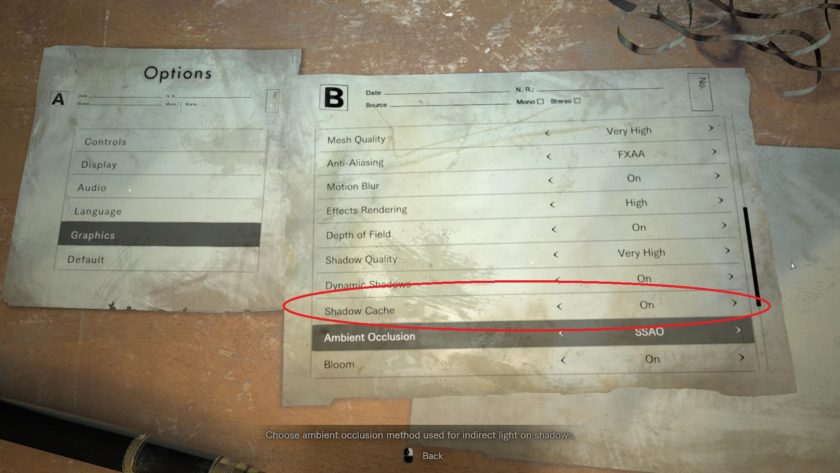 Here are the results of the RX 480 at 8GB, 4GB, and 4GB with Shadow Cache disabled right in the middle. 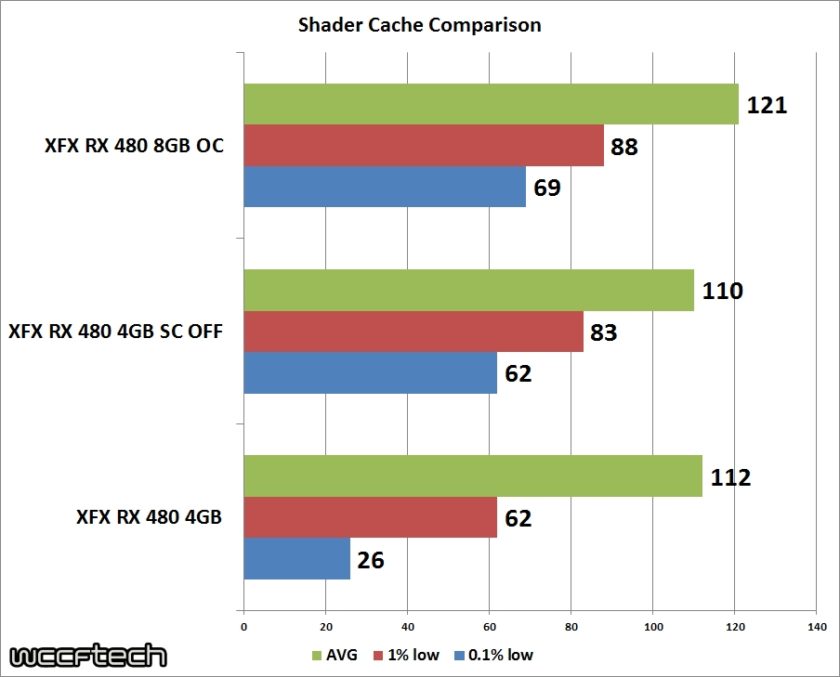 So the result is rather substantial when concerning performance.  So it goes without a doubt that if you don't have a substantial amount of VRAM you will be much better off by disabling this feature.  I have not substantiated the visual impact of this, but rather focused purely on the performance aspect.

This updated section was just to add a little additional insight into the games performance with some modifications.  If going forward you would like to see not only performance reviews but also additional optimization guides let us know, I would love to do that for you all if you're interested.