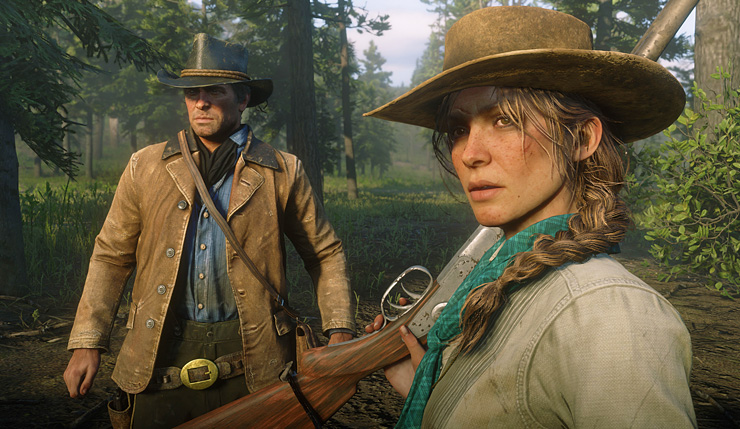 Due to an exclusive agreement with Sony, the PS4 Pro has been front-and-center in all Red Dead Redemption 2 promotional materials, and the platform is getting timed-exclusive content at launch. That said, according to the tech heads at Digital Foundry, the Xbox One X is actually the best way to experience Rockstar’s latest open world.

Red Dead Redemption 2 runs at native 4K and a near-locked 30fps on Xbox One X. Meanwhile, the PS4 Pro version’s native resolution is only 1920x2160, upscaled to 4K using checkerboard rendering, and the game drops frames when in towns and other heavily-populated areas. Also, it seems RDR2 uses a temporal anti-aliasing method, which doesn’t scale well, slightly muddying the PS4 Pro image.

But what if you don’t have access to Microsoft or Sony’s souped-up 4K consoles? What if you’re a pleb playing on the standard machines? Well, in that case, you’re probably best going with the PS4, which runs at your standard 1080p. Meanwhile, the Xbox One S only runs RDR2 at 864p and the temporal anti-aliasing scales particularly poorly to that resolution, with shadows and foliage looking “blurry and grainy.” Ah, but there’s a twist – it seems RDR2 runs slightly better on Xbox One S than on the standard PS4. Framerate on both consoles can drop to the low 20s, but it’s somewhat less common on the Xbox One. Overall, I’d say the higher resolution still makes PS4 the better choice, particularly since RDR2 isn’t exactly a twitch action game, but if performance comes first for you, maybe you should go with the Xbox One.

Ultimately, you’re probably going to have a great time with Red Dead Redemption 2, regardless of platform. Wccftech’s Alessio Palumbo declared the game another true Rockstar epic in his review…

“Red Dead Redemption 2 may not be perfect, but its minor shortcomings are like tiny blemishes on a stunningly beautiful face. In a way, they only serve as a reminder of how this world isn't made for perfection. Every single aspect of the game will put you into the very shoes of an outlaw roaming America with his gang as they try to escape the law long enough to make the money needed to disappear for good. It's an epic, memorable and engrossing tale which also elevates the open world genre to new heights with the brand new interaction system, a cast of memorable characters and a ton of high-quality content to play for a long time.”