Windows Phone is already gaining a lot of users everyday through their unique and simplistic OS. Further innovations from Nokia, HTC and Samsung have increased the intimidation amongst many rivals such as Anroid and iOS platfotms. The fun of Windows Phone OS was boosted by ChevronWP7 Unlock which was made available to public recently in order to install homebrew apps and now Windows Phone users have finally got a homebrew app to reboot their phone. 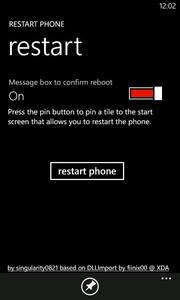 The app comes from singularity082, the same XDA forums developer who earlier provided the Battery Live Tile app. This app is named as Mang Restart. It can be pinned into the start screen. However, in order to reboot you will have to open the app and then tap the ‘restart phone’ option in order to restart your phone (if you’re too lazy to use the power on/off switch).

In order to download the xap file of the app and install it on your homebrew app click HERE. The app doesn’t require your phone to be interop unlocked and works well according to users on unlocked phones. The video below shows how the app really works on your windows phone.

In order to unlock your phone you need the ChevronWP7 Unlock which is available for $9.00 per device. Windows Phone 7 has a bright future up ahead. Let’s see how well does the upcoming phones perform.