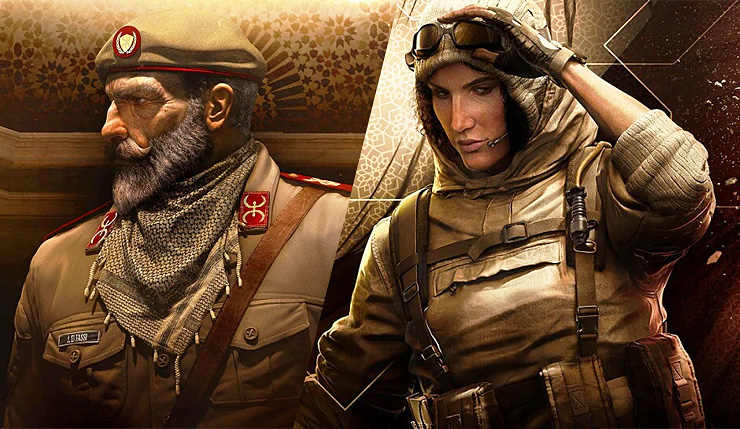 Rainbow Six Siege’s fourth “season” of Year 3, Operation Wind Bastion, was announced early last month, but Ubisoft had been somewhat cagey about the update’s release date. This was likely due to Ubisoft decision to scrap planned Siege aesthetic changes  – reverting the visual tweaks had the potential to delay the update, but it seems that didn’t end up happening. Operation Wind Bastion should be available to most players as of now.

Kaid’s "Rtila" Electroclaw can electrify reinforced walls and hatches, barbed wire, and deployable shields, making it tougher for the enemy to breach the Kasbah and any facility he’s tasked with protecting. He enters the field with three of these throwable gadgets. Once they’ve attached themselves to a surface, they each electrify metallic objects within a 0.75 meter radius.

Nomad’s custom rifle attachment allows her to launch Airjab repulsion grenades. They can explode midair when in close proximity to an enemy or they can stick to a surface and detonate later, again when an enemy is within range. Nomad enters the field with four Airjab grenades. These pushback devices are non-lethal but they disorient those affected.

Welcome to Kaid’s Fortress. This large daytime map features a mudbrick kasbah and iconic architecture unique to the southern region of Morocco.  Based on real and existing structures, the many exterior stairs provide unprecedented access to the roof and drop-down points via the towers. Housed within the fortified and bare walls of the Kasbah are two floors of living and training space, each with its distinct rooms and halls. The multiple stairs and a ladder allow for rotations between floors.

Players will find both renovated and non-renovated areas on this map. The Art Team aimed to make the two sections distinguishable from each other, allowing players to better orient themselves in the Kasbah at any given time.

Operation Wind Bastion features rich materials and artistic detailing with North African influences. The seasonal weapon skins are the humble Terra Cotta, the intricate Painted Floral, and the dignified Baroque Exalted. These will elevate your loadouts to new heights.

You can now support your favourite pro league teams by representing their colours.  During the previous Season, we released Pro Team weapon skins and charms. With Operation Wind Bastion, you can now acquire a matching BDU and Headgear to deck out a specific Operator from head to toe to cheer on your favourite Team.

We have changed the throw curves for throwable gadgets to be easier and more comfortable to use. All throwables now use this new curve except for the Nitro Cell. The Nitro cell is not using this new curve, as it will be classified in a different category defined as “heavy throw”. The throwables classified under heavy throws will not reach as far as the “regular” throw.

Beginning with Operation Wind Bastion, we will be implementing a new Area of Effect feature for Kaid and Nomad. This is designed to help new players better understand the area of effect when deploying a gadget. This will only be visible for the Operator placing the gadget. We also recognize that experienced players may not be interested in the visual feedback presented by this change, so players will have the option to disable it in the settings menu. As of right now, this feature will only be available for Kaid and Nomad, and do not currently have plans to add this feature to past Operator’s gadgets.

We currently have two different SSAO techniques to render Ambient Occlusion: SSBC and HBAO+. Lately, our 3D team has been working on replacing the HBAO+ with a improved SSBC+ technique. We have done this because we want to have control on what is rendered on screen. Overall, this will give us greater control over the implementation of graphics options across all platforms, and enables us to increase the overall quality of image rendering across the board. There is no noticeable difference in performance between SSBC+ and HBAO+.

If you’d like to know about every single minor bug fix, you can check out the full, unabridged Wind Bastion update notes, right here.