PUBG Mobile is undoubtedly one of the biggest mobile games released in the recent past. So, it comes as no surprise that the game is now the revenue leader among battle royale games on mobile,  according to market research firm Sensor Tower. The rise can be attributed to Tencent Games releasing PUBG Mobile in China two months ago under the monicker of Game for Peace. Player spending rose to $167 million shortly after marking a 748% increase over last year. This makes the PUBG the No. 1 game in terms of revenue for three months in a row, according to Sensor Tower’s findings. 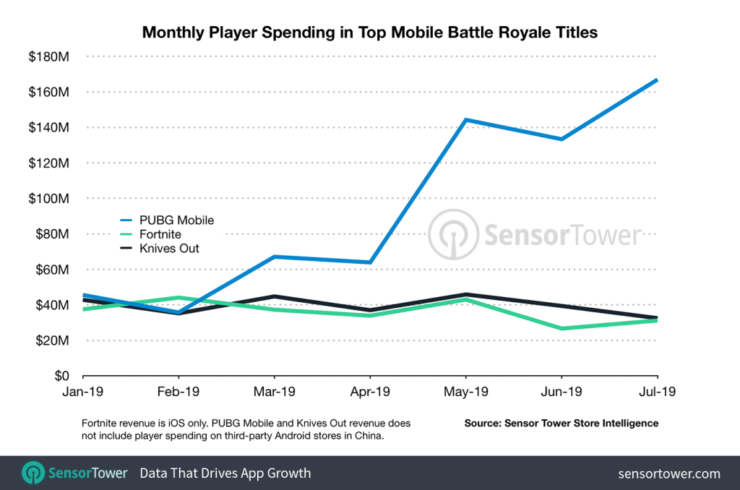 It can be stated without doubt that China is the major driver behind this increase in revenue as it has contributed almost 30% of the game’s all-time total in just two months. Even with China out of the picture, the game has still grown its revenue nearly 310% over last year.PUBG Mobile is now ahead of Epic Games’ Fortnite and Knives Out from NetEase. Both titles have grossed $725 million and $771 million, respectively, compared to PUBG Mobile’s $860 million. Fortnite’s revenue is inclusive of iOS only, as the title is not available through Google Play. Additionally, the report also does not include any revenue generated from the 'Lite' version of the title called PUBG Mobile Lite. The title is, as the name suggests, a lightweight alternative to the game designed specifically for older devices that may not pack the necessary hardware to play the game.

The Sensor Tower report states that PUBG Mobile is gaining a lot of players in the US and several South-East Asian countries as well. As a result of its meteoric rise to popularity, the game has attracted more than its fair share of negative press. The government of Nepal considered banning the game stating that it 'causes children to lose focus'. One state in India even arrested a couple of teens for defying a de facto ban that was issued against the game.