Trying out the HTC Vive

First up, the Vive. The nice nVidia lady slips the headset on me and a pair of headphones follows. I wear glasses, they’re not huge ones and a bit of fiddling about later, I’m comfortable. I’m in what looks kind of like the Matrix loading room. It’s a whitish grid based room, nothing really to look at. All of a sudden I see a pair of Vive controllers approaching me and hear a distant voice saying “here, take your controllers!”

Bemused at the fact that I can see some real world objects in VR I put my hands out to where I judge them to be in real life and grab hold (of the controllers!).

They’re instantly comfortable and intuitive. I can see where my thumbs are touching the touchpads from a little dot on the pads. There is a trigger too which the index finger naturally comes to rest on. 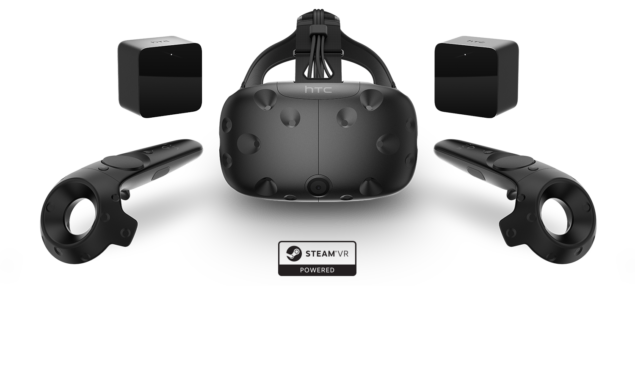 Before I know it, there’s some kind of balloon on the end of the controller. Holding down the trigger blows up the balloon. Bringing the other controller up to the balloon allows me to knock it away with a little haptic feedback effect as I tap the balloon. I can select the colour of the balloon on the left thumb touchpad. A few balloons later and I’m sitting there thinking “ok, not bad, but there’s no way I’m paying over £700 for that. £700 buys a lot of real life balloons…”

I’m back at the loading room and the next set is loading. I’m instantly thrust onto the underwater deck of a wreck in WEVR's TheBlu Encounter. Fish are swimming all around me, I look up and can see daylight filtering down from the surface of the water and lots of fish and rays swimming around. I wonder…

I take a look at some of the small fish swimming seemingly close to my face. They look very lifelike. I stick my controller out towards them and they swim to get out of the way. Nice! I start to walk around the deck of the ship a bit, it’s not very big as you’d expect. That’s a function of both the facts that I’m tethered to a PC with cables and in a fixed room which is also not huge. As I approach the edge of the deck, a glowing grid appears to warn me that I’m approaching the end of the holodeck area so I step back.

Pretty cool again. But after a couple of minutes of being awestruck, I’m starting to get bored of scaring fish away, when all of a sudden, I hear a noise. I turn around to look in the direction it came from and nearly have a heart attack as I see a huge whale swimming toward me! It comes to rest right next to the deck of the ship and it’s just a gargantuan thing. I don’t know how else to describe it. It’s amazing in detail and scale. The flipper is almost next to me. I’m standing there gobsmacked at the view when all of a sudden it starts to move and I intuitively jump to get out of the way as the “arm” flipper (yeah, I’m no marine biologist!) swooshes through where I was standing seconds before. Then the tail comes swooping down and I brace for impact before remembering I’m in a simulation. Some of the stuff on deck gets whooshed around a bit as the whale swims off but I’m left intact.

There are a few other games, a very dull “you at work” one where you get to eat donuts, drink coffee, throw paper aeroplanes at your boss etc and a 3D paint type program by google called Tilt Brush which is pretty cool, but I’m no artist. Now to the first thing I’d classify as an actual game.

Space Pirate Trainer loads up and what on the face of it is a very simplistic stationary shooter with you standing on a platform while waves of flying robots come and start shooting at you is actually a pretty involving game. The first few waves are easy, but as more robots come, all those years spent tilting your body to the left while playing a videogame and trying to move left all of a sudden have meaning. You can DODGE the incoming fire! Your two controllers are transformed into guns and you unsurprisingly pull the triggers to shoot them at the robots. Very simple premise, but exceedingly enjoyable to play. I have no doubt that in the coming years, people will look back at Space Pirate Trainer with the same sympathetic eyes with which we today view Space Invaders or Pac Man. 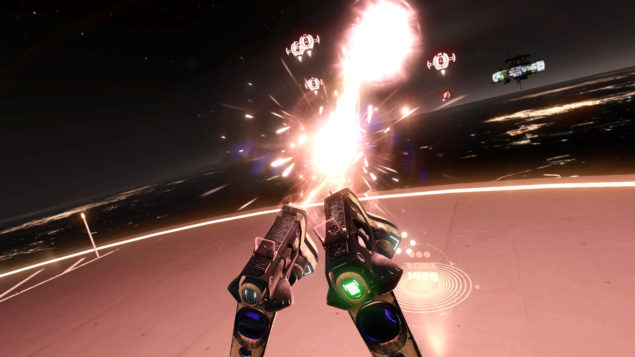 Who doesn't want to be a space pirate?!

It’s a completely uninspiring game on the surface. But given that this is the first game I’ve EVER PLAYED where me moving around didn’t make me feel stupid because I should’ve been moving the controller instead of my body, it’s AWESOME! Kind of like a bowler who after throwing the ball starts leaning his body trying to steer it with sheer will, now that will be a useful skill.

After finally removing the headset, I discovered myself a bit breathless from all the ducking and diving trying to avoid incoming fire. Pretty awesome, although the game graphically was nothing amazing.

None of the experiences I tried on the Vive ever seemed to struggle in terms of a frame rate or keeping up with my movements.