The PS VR experience however was a different kettle of fish. One game, one full round. I sat down in the chair as the Sony rep put the top ring around my forehead and showed me the button to press to adjust the distance of the screen from my eyes until in focus. 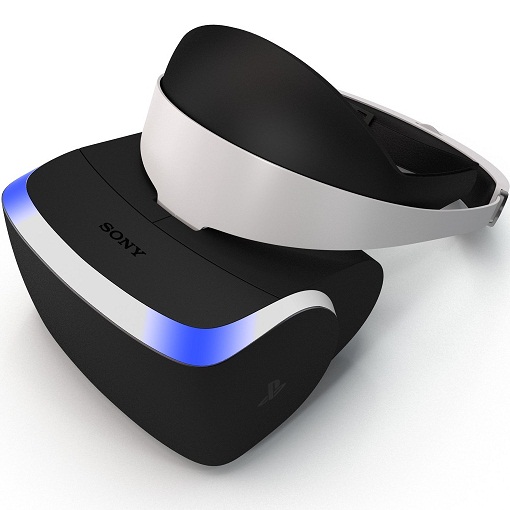 They explained I was about to play “RIGS Mechanised Combat League”. A kind of mech robot you sit in shooter and football (soccer to our American compatriots) game all in one. The object was seemingly simple. Shoot the opposing teams mechs, when they die, they drop these glowing yellow balls. Collect the balls and then jump through the “goal” to score points. It’s a timed match.

Starting up, the game introduces me to some basic controls and before long I’m running, jumping, double jumping, shooting, ball collecting and goaling.

The game is a bit more complicated than Space Pirate Trainer, but it’s still not a particularly complex game. I run around the arena shooting the enemy mechs (and occasionally accidentally at my own team) and scoring a couple of goals. Then something odd starts to happen. 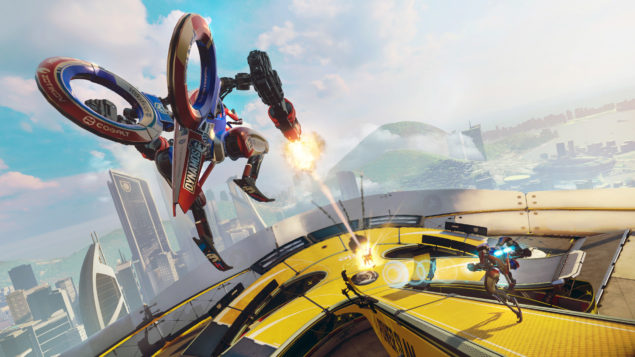 Not quite as destructive as Pacific Rim mechs, but still fun!

The motion sickness which was conspicuously absent on the Vive is starting to appear here. Thankfully the whistle blows and thinking my session is over I reach out the controller in the direction I remember the Sony guy being in who informs me “it’s only half time! Keep going!”

So for you dear readers, I struggled through another half, but now I’m paying more attention to the experience than playing the game. Obviously I didn’t have FRAPS or anything else running, this is on a PS4 after all, not PC but there seemed to me to be some noticeable drops in frame rate. I’m not talking Assassin’s Creed Unity levels here but at the same time, noticeable. Aiming also seems slightly unintuitive, being a combination of controller sticks and head movement. The free reign the Vive gave me to move my whole body and point my “guns” is missing here and I wonder if that’s part of the problem too.

I struggle through the second half and am grateful when the final whistle blows. I win the game 7-2 which seemed surprising, I guess my AI teammates helped me out a lot there but all I could think about was that I couldn’t wait to get the headset off.