[Updated] PS Plus May 2021 Games Might Include Godfall/Disco Elysium, Battlefield V and Stranded Deep – Rumor 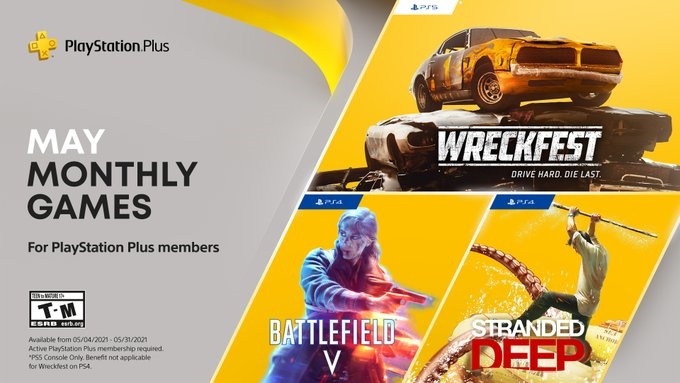 [Update] The free PS Plus May 2021 games have just been announced by Sony and include Battlefield V and Stranded Deep for PlayStation 4. This month's free PS5 title is the enhanced edition of Wreckfest. Sorry guys, no Godfall after all.

Battlefield V, Stranded Deep, and Wreckfest: Drive Hard, Die Last are your PlayStation Plus games for May: https://t.co/ZtoKbYN1nq pic.twitter.com/exayc8bui4

[Original story] The PS Plus May 2021 games could very well include Godfall for PS5/Disco Elysium, Battlefield V, and Stranded Deep.

The next batch of PS Plus games will soon be revealed by Sony, but well-known insider and Xbox Era’s Nick "Shpeshal Ed" Baker says that he has already heard “signals” about next month’s free titles for Sony’s consoles.

According to the insider, both Battlefield V and survival title Stranded Deep are almost certainly next month’s free PS4 titles. Battlefield V is already a part of the PS Plus Collection for PS5 owners, but the shooter hasn’t been made available for PS4 players just yet.

Those of you who reached out to me about Battlefield V and Stranded Deep seem spot on. My normal source just reached out. Those 2 are the PS4 games. Still no clarity on the PS5 games pic.twitter.com/lQifJydPsG

As for the other titles arriving for Sony’s subscription service, both PS5’s Godfall and the console release of Disco Elysium are said to be possible candidates to join the PS Plus library, although the insider notes that he isn’t exactly sure about these titles just yet.

“Ok, I'm hearing some mixed signals on PS Plus games next month”, the insider wrote on Twitter. “First I heard Disco Elysium is one of the games, then Godfall. Would both be out of the question? But neither of these came from my usual source so big grain of salt.”

As mentioned by "Shpeshal Ed", and as with all rumors, take the information above with a fair pinch of salt for now.

Last month, the free PS Plus for the month of April leaked through a deal site ahead of Sony’s official announcement, and include Oddworld: Soulstorm, Days Gone, and Zombie Army 4: Dead War. Those who haven’t claimed these free titles yet can still do so through the 3rd of May.

What are your thoughts about next month’s PS Plus games? Will Sony include Godfall for PlayStation 5? What about Disco Elysium? Hit the comments down below.