Sony: PlayStation VR Edition of Star Wars Battlefront Will “Show Gamers What it Means to Be in the World of VR”

If you are on the fence about virtual reality and not sure if you should spend your money on the PlayStation VR headset, which is scheduled to launch later this year in October, the upcoming virtual reality version of Star Wars Battlefront that is currently in development as a PlayStation exclusive could be the game that will introduce you to the truly immersive world of virtual reality entertainment, as Sony says it will “really show gamers what it means to be in the world of VR.” 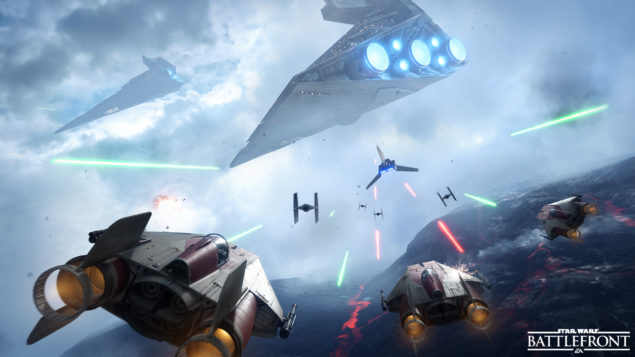 Star Wars Battlefront VR Will Help Sell PlayStation VR - It is Going to Be Very Special and Different, Says Sony

A couple of weeks ago, Sony released an important update on the PlayStation VR during Game Developers Conference, revealing that the headset will be available in stores this October with a price tag of $399. The Japanese platform holder also confirmed that the company is working "to have more than 50 games available" for its virtual reality gaming head-mounted display before the end of 2016, and we already know that one of those games takes place in a galaxy far, far away.

The VR compatible version of Star Wars Battlefront was announced shortly after the aforestated update, and there are several things that were not clarified. For instance, there are no details on whether or not the content of the VR version of the game will be identical to the standard PlayStation 4 version. Sony didn’t announce an exact release date for the game as well. However, you can be sure that Star Wars Battlefront VR will be nothing short of a “very special” game that will show you “what it means to be in the world of VR.” That’s according to John Koller, vice president of marketing at Sony Interactive Entertainment, who, in an interview with Fortune, said:

"We are working with EA, DICE, Lucasfilm, and Disney to try and make that experience something so special and so intrinsic to what's in many people's DNA, which is, 'How can I be in that world of Star Wars?’ Battlefront is going to be one of those games that will really show gamers what it means to be in the world of VR. It's very special. And just by the nature of it being designed as a VR experience, it's going to be very different than the PlayStation 4 game."

“Star Wars is a great example of something that we will really own during that launch period. But over time there will be games that launch, where we’ve been helping with the development process, that will be most special on PlayStation VR, whether it’s exclusive or not. It’s going to be best played on PlayStation VR.”

Star Wars Battlefront VR will be exclusive to PlayStation VR. Koller went on to talk about the role of exclusive virtual reality games and explain how VR exclusives are different than console exclusives. According to him, you can generally say that console exclusive games help drive hardware sales, but VR is personal, and it depends on what experience a person finds fit and great. He said:

"The role of exclusive VR games is a little different than what we see in the general console space. For example, I don't believe that there needs to be one particular killer app. There can be a range of killer apps. VR is so personal. It really depends on what experience that person wants and what they think is really great. That's different than our (console) platform launches, where you generally can say, 'That's the game' (that will help drive hardware sales)."

As mentioned before, not much has been made public about the PlayStation VR version of Star Wars Battlefront. The game is promised to deliver a “cinematic gaming experience” based on EA and DICE’s original, critically-acclaimed first person shooter, which was released last year in November for PC, PlayStation 4 and Xbox One, and has sold more than 13 million copies as of the start of this year.