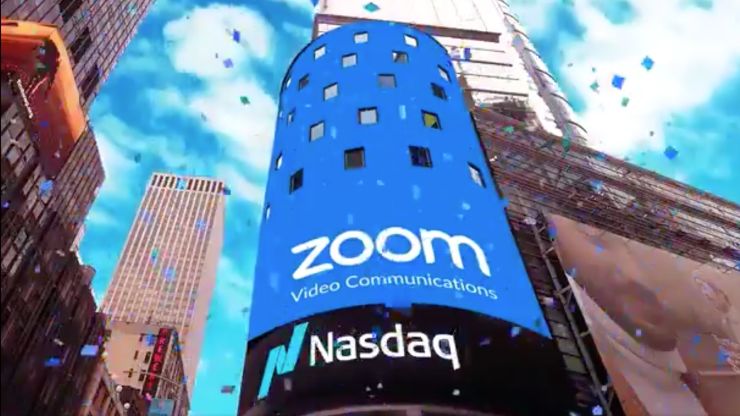 Today brought the next wave of 2019's slate of tech IPOs. Pinterest, a social media platform that call itself a "visual discovery platform" launched today under the ticker 'PINS' (NYSE:PINS). Zoom, a company that specializes in video conferencing, hit the market trading under the symbol 'ZM' (NASDAQ:ZM).

Zoom shares soared today. Ahead of the IPO the company revised its S-1 filing and raised its pricing range from $20-$32 to $33 -$35. In a somewhat uncommon twist, Zoom priced its shares above the higher revised range at $36 per share which drove the estimation of the company to $9.2B.

Shares soared on the NASDQ in Thursday's trading session, ending the day up 72 percent at $62! Zoom is now worth about $16 billions. Perhaps the main driving factor that drove investor demand for its shares is the fact that Zoom is in rare company these days in the world of big tech IPOs - it actually makes money.

In 2018 the company managed to mark a profit of $7.6 million, which by any normal standards is extremely low for a company valued at $16B, but compare that to Lyft (NASDAQ:LYFT) (down another 2 percent today) that lost $911 million in 2018, or the year's upcoming blockbuster IPO, Uber, which lost $1.8 billion over the same time period.

Beyond the bottom line, Zoom's most recent fiscal year, 2019, saw revenues spike 118 percent to $330 million. The year prior Zoom increased its revenue by around 150 percent. Growth numbers like these are extremely promising and coupled with a profitable year means Zoom is underpinned by solid financials, at least for now.

Pinterest can't make the same profitability claim that Zoom does, but last year did see the company pare its losses down to $63 million, a marked improvement from 2017's loss of $130 million.

That improving bottom line encouraged enough investors to buy up the stock, pushing it to $24.40 a share up from the IPO price of $19. Pinterest closed the day at a valuation of around $12 billion, 25 percent higher than its IPO valuation of $19 billion.

Pinterest has some interesting 'claim to fames'. For instance, it claims that in the U.S. 80 percent of all women aged 18 to 64 who have children use its platform, and that more than half of all millennials are Pinteresting as well.

Pinterest doesn't consider itself a social media platform but it does touch on the subject of compeittors it in its S-1 filing:

"We primarily compete with consumer internet companies that are either tools (search, e-commerce) or media (newsfeeds, video, social networks). We also compete for advertising revenue across a variety of formats. Some of our competitors have greater financial resources and substantially larger user bases."

Both of today's tech IPOs showed huge gains on the market. We will see if the same fate of Lyft's befalls them, or if they can maintain the positive movement. We look forward to the year's mega IPO, Uber, coming up next month.