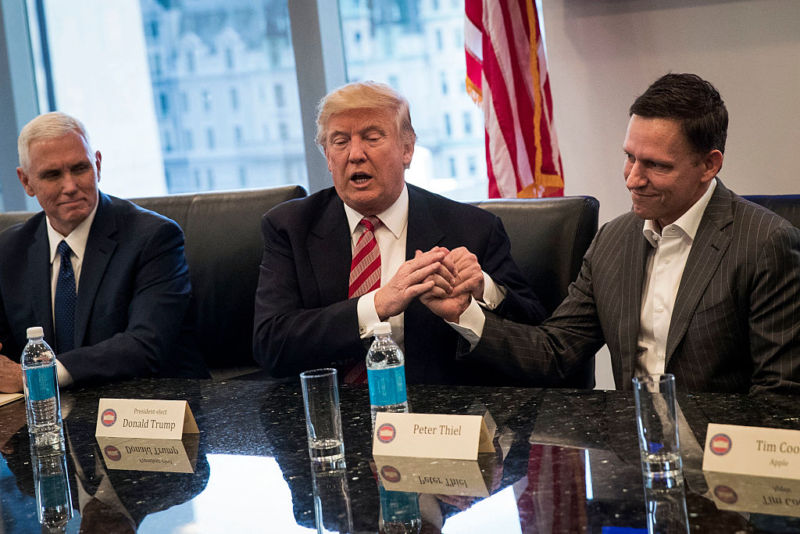 Peter Thiel - the real winner of 2016 US election?

"Immigration and Customs Enforcement is deploying a new intelligence system called Investigative Case Management (ICM), created by Palantir Technologies, that will assist in President Donald Trump’s efforts to deport millions of immigrants from the United States," The Intercept reported.

Co-founded by Thiel, Palantir was awarded a $41 million contract to construct and maintain ICM, according to government funding records. While the system won't be finalized until September, the Immigration and Customs Enforcement agency is already using it.

According to the publication, ICE provides the agency with an ecosystem of data that facilitates "immigration officials in both discovering targets and then creating and administering cases against them".

The system provides its users access to intelligence platforms maintained by the Drug Enforcement Administration, the Bureau of Alcohol, Tobacco, Firearms and Explosives, the Federal Bureau of Investigation, and an array of other federal and private law enforcement entities.

In short, it is a weapon that uses information from a growing network of interconnected databases that will potentially help the agency in deporting millions of people.

"If President Trump’s rhetoric on mass deportations is going to be turned into reality, then we’re going to see these tools turned in that direction, and these documents show that there are very powerful and intrusive tools that can be used toward that end," Jay Stanley, a privacy expert at the American Civil Liberties Union told The Intercept.

Obama started the expansion of intelligence systems aimed at immigrants

Peter Thiel rose to popularity after Trump's election victory and is also known as the "shadow president" in Silicon Valley. However, Palantir had received government surveillance contracts way before Trump was elected. In fact, this $41 million contract was approved back in 2014 by the Obama administration. The Intercept added that Palantir's ICM documents offer details on the Obama administration's expansion of the federal government’s tools to track and deport immigrants.

"Obama not only presided over an unprecedented number of deportations; his administration also oversaw the pronounced expansion of intelligence systems aimed at the country’s immigrants."

With the new President being more vocal against immigrants, the overreaching immigrant surveillance apparatus that Obama approved is going to assist President Trump in carrying out his promise of deporting millions of immigrants.

While ICE focuses on immigrants, the funding documents suggest the intelligence tool can also be used against the US citizens.

"Citizenship can be established a variety of ways to include biographical and biometric system checks,” one document states. “U.S. Citizens are still subject to criminal prosecution and thus are a part of ICM.”

Using this data, XKEYSCORE allows federal agents to understand a person's social and ideological connections by mapping out a large amount of personal data. Add the power of XKEYSCORE with the information that ICM could suck out of different databases - and you have built the most invasive surveillance system ever.

According to the documents, Palantir was required to build a tool that can handle “no less than 10,000 users accessing the system at the same time” to be able to search tens of millions of subject records simultaneously.

"With its full deployment arriving just in time for the Trump transition," The Intercept warned, "ICM appears well positioned to respond to a new set of demands being placed on ICE by a president elected on promises of deporting immigrants en masse."