It's the holiday season and we thought it was about time we do a PC building guide for the budget centric builder. The aim of this build guide will be to get every ounce of gaming performance possible while sacrificing a bit on the side of office and compute performance - which gamers aren't interested in anyway. The target resolution methodology that we will be following is the 4k.

Now as most of you will already we know, we have a tool that does this for us. Every 24 hours, it scrapes through all available PC parts and after going through a total permutation of 8 billion builds it spits out the build with the highest gaming performance (measured through an FPS metric of a panel of AAA titles) for every single price point. This means that every time you run the tool, you will be able to get the absolute best bang for your buck if you are a beginner, or a very good starting point if you are an expert builder. You can play with the tool yourself over here.

Let's start with the budget build, ie maximising gaming performance at around $700. Most of the guides you will see on the web usually max out with a GTX 1050 Ti, but using our tool, we can squeeze out even more performance with the following build:

This particular build will be able to play almost all AAA games at the 1080p resolution and while the CPU is a bit on the low end it should be able to handle the 1060's power quite easily. Substituting a more expensive CPU would not be effective because that would mean downgrading the GPU and causing the overall gaming performance to drop. 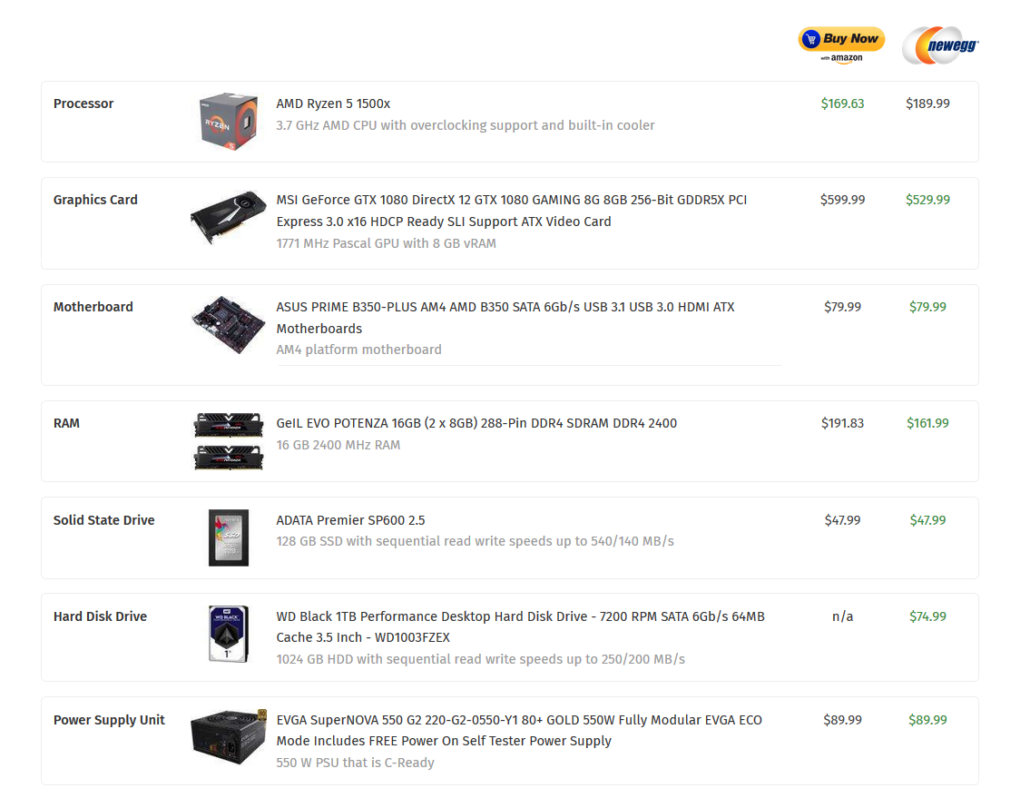 Up next we have the category of people who are looking for something slightly more future proofed and our favorite bang for buck build that our tool churns out. With a budget of just $1150, you can get amazing gaming performance with extremely decent compute and office functionality as well as future proof(ness). Oh and our algorithm also managed to squeeze in an SSD. Without any further ado, here are the build specs and links to the cheapest prices online:

This is one of those builds that we are really proud of, our tool managed to squeeze in a GTX 1080 combined with a decently powerful 1500x as well as an SSD (and even 16GB RAM!) in what is quite possibly the best bang for the buck gaming combo out there. I don't think you can find a better $1150 build anywhere else on the web that can give you this level of gaming performance. The target resolution for this build is 1440p but it should do well even in 4k if you are willing to drop the AA a bit.

Finally, we have a holiday build for those who want the best gaming performance available right now for the cheapest possible price. In this particular build, our intelligent algorithm was able to squeeze in a GTX 1080 Ti with an AMD 1600 processor for just over $1350. Here are the specs:

If you are aiming for top of the line gaming performance with 4k-level performance and decent upgradability (CPU can be upgraded to the Ryzen 7 1700 when more budget permits as well as a custom cooler bought to replace the wraith coolers) then look no further, this is it. $1450 is the lowest you can go if you want to get a GTX 1080 Ti with a CPU that can run it without too much of a bottleneck. You should see minimum bottlenecking at the 4k resolution spec, but at 1080p it can cause issues, so if you are aiming for a high fps 1080p standard, then you are going to want to go with a higher specced processor such as the 1700.

Well hope that was informative to anyone wanting to build this holiday season for themselves or loved ones and if you have any other customized budget in mind, then you can simply plug it in our PC Building tool and get the same results.