Paradox May Be Teasing a Vampire: The Masquerade Announcement Taking Place During GDC 2019

Paradox has now officially joined the teasing game. The cat is almost out of the bag now!

What could be next? I guess March 21st is the date to watch? #TenderBeta pic.twitter.com/2n1LyBnqzM

Paradox Interactive has been sitting on the treasure trove of IPs belonging to White Wolf since they acquired the renown RPG publisher in October 2015.

World of Darkness is to this day one of the most popular settings for pen-and-paper fans, but the Swedish publisher didn't exactly rush into making lots of videogames based on it. They did announce Werewolf: The Apocalypse, which is in development at Cyanide and will be published by Bigben Interactive at some point next year.

However, Vampire: The Masquerade remains the most beloved of all settings within World of Darkness with its intricate web of relationships and politics between all the different clans of vampires. It seems that a new Vampire: The Masquerade videogame might be announced very soon after a cryptic, yet intriguing ARG (Alternate Reality Game) is dropping hints left and right.

To summarize, there's a new dating app called Tender that supposedly matches profiles on a variety of criteria, including blood type. That's right. Except Paradox has been found to be behind the website. Moreover, an internal memo supposedly sent by the CEO of Tender to the company's CTO seems to be a clear hint to an announcement taking place in San Francisco, California, on March 21st; that's when this year's Game Developers Conference will be in full swing in the Bay. 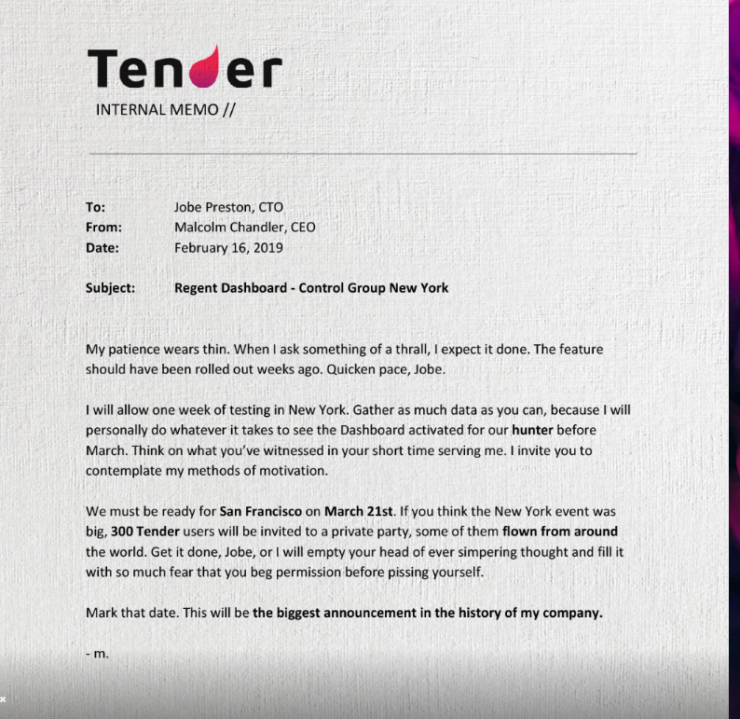 Last but not least, a recent Tender live stream on Twitch briefly showcased the Santa Monica pier, which was a key location in the last great Vampire: The Masquerade videogame - 2004's Bloodlines by Troika Games.

Vampire: The Masquerade - Bloodlines delivers a new type of RPG experience-one that blends all the core elements of a traditional RPG with the graphical richness, immediacy and brutal combat of a first-person action game. The game plunges players into the dark and gritty vampire underworld of modern-day L.A. as a creature of the night. Players will develop their character's powers, interact with other characters and embark on story-driven quests as they battle mortals and other vampires with an incredible array of vampire powers and weapons. Powered by Valve's Source Technology, the game is based on White Wolf's popular Vampire: The Masquerade pen-and-paper RPG series and its official clans.

Would you prefer a direct sequel to Bloodlines or something else? Tell us in the comments!