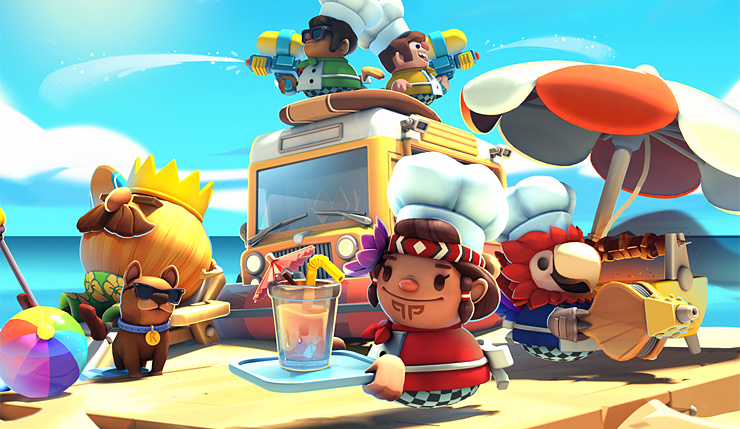 That autumn chill may be in the air, but Overcooked 2 is heating things up with the new tropical-themed Surf ‘n’ Turf expansion! The DLC adds a couple recipes (kebabs and smoothies), 12 new stages, and water guns you can use to clean dishes. Not sure if that’s the most efficient way to clean up, but sure, why not? You can check out a Surf ‘n’ Turf trailer, below.

In Surf ‘n’ Turf players will join the Onion King on a culinary island adventure, cooking up new recipes, navigating new kitchens and meeting some colorful characters. Surf ‘n’ Turf serves up 12 brand new kitchens, from the swimming pool to the beach, but don’t get too relaxed as new kitchens mean new obstacles. It’s difficult to tantalize anyone’s taste buds when there’s a tidal wave coming!

The original Overcooked is one of the best same-couch co-op games of all time, and I found Overcooked 2 to be a worthy successor in my review…

“Overcooked 2 mostly sticks to a winning recipe. The clarity and simplicity of the first game has been muddled a bit – some of the new recipes and kitchens are a touch too complex for their own good – but the addition of online play makes up for a lot. If you’re new to this series, I suggest you check out the near-perfect original Overcooked to start, but if you’re an existing fan hungry for more, Overcooked 2 is a tasty second helping.”

Overcooked 2 is available for PC, Xbox One, PS4, and Nintendo Switch. The Surf ‘n’ Turf DLC can be downloaded now for $6.