The original Overcooked was one of the sweetest surprises of 2016. It filled the both-butts-on-the-same-couch multiplayer void left behind by sadly-diminished series like Bomberman and Mario Party, and it was co-op! You could bust the game out when your ultra-competitive family was over and nobody would need to be disowned by the end of the evening. Overcooked managed to tap into a niche audience starved for family-friendly co-op fun and became a solid sleeper hit.

Now, two years later, the second course has arrived. Overcooked 2 adds new mechanics, online play, and, of course, a whole slew of new kitchens and recipes, but is this the delicious dish your remember? Or a cold plate of plastic-wrapped leftovers? Let’s dig in…

Like its predecessor, Overcooked 2 is an arcade kitchen-management game, which casts you and your friends/family as line cooks attempting to produce edible food under increasingly ridiculous conditions. Orders file in across the top of the screen, but otherwise you don’t interact with the diners -- it’s just you and up to three other chefs against the clock. Each completed meal garners you a set number of points, with bonus tips if you’re speedy and send the meals out in the proper order, while taking too long will result in a penalty.

Overcooked 2 serves up 35+ cleverly-designed stages, which boast a variety of new gimmicks and challenges, including magic portals, rideable conveyor belts, and controllable platforms. The game also adds new dynamic kitchens, which change on the fly – you may, for example, find yourself cooking in a hot air balloon, which crashes to earth mid-challenge, completely changing the layout of the kitchen. These dynamic stages add an extra layer of frantic fun to the proceedings and serve as nice, properly-challenging "boss levels" at the end of each world.

As in the first game, all the kitchens are all built to encourage cooperation. You’ll constantly find yourself divided from, or, alternatively, tripping over your fellow players, and will soon discover that constant verbal communication and having a plan going in is essential. Overcooked 2 doesn’t give players many new teamwork-aiding tools – the one significant addition is the ability to throw ingredients. Hurling uncooked chicken and steak across the kitchen isn’t exactly sanitary, but it does open up a surprising variety of new strategies. Veterans of the first Overcooked will have to get used to chucking stuff instead of doing things the hard way, as the mechanic is key to racking up high scores in some of the more difficult kitchens.

Unfortunately, Overcooked 2 sometimes gets a bit too ambitious for its own good. The kitchens are bigger and more complex this time around, which means the camera has to be zoomed out, making everything slightly smaller and more difficult to see. Also, while Overcooked 2 is an overall better-looking game than its predecessor, some of the fancy new lighting effects can make it hard to identify certain foods. Is that a pile of chopped up chicken, meat, or potatoes? Sometimes you really have to squint to tell. While most of the kitchens in the original Overcooked were very easy to “read” at a glance, you may initially find yourself frustrated by many of the new stages. Eventually you’ll get the hang of things, but it may take a few minutes and a couple failed zero-star attempts to memorize where everything is.

The Escapists 2 Review – Get Me Out Of Here, Please!

The game also slightly overcomplicates the cooking itself. The first Overcooked reduced chefery to a handful of basic actions – chopping/preparing ingredients, cooking, assembling, serving, and washing plates. It didn’t matter if you were making burgers, pizza, or burritos, it was always those same five actions. Overcooked 2 adds new recipes like steamed dumplings and cakes, which require an additional mixing phase, which is just enough to make them aggravating. Overcooked isn’t really about cooking. Yes, you’re chopping and frying up ingredients, but these are cooking games in the same way BurgerTime is. They’re arcade action games that just so happen to involve food and characters in chef hats, and their challenge should primarily arise from the design of the kitchens, not the recipes.

I hope I’m not coming off as too negative, as I still had a lot of fun with Overcooked 2. The game’s addition of online multiplayer is an unequivocal win – Overcooked 2 still isn’t great played alone, but now you can still enjoy the game if you can’t arrange to get another friendly butt on your couch. It was somewhat difficult to find other online chefs pre-launch, but the few sessions I did set up were nice and smooth. That said, be aware that voice chat, which is essential for a co-op game like this, is only available on Xbox One and PS4 – no haranguing your fellow chefs about not washing the dishes on PC and Switch.

Depending on your virtual culinary skills, you can expect Overcooked 2 to keep you busy for a solid 5 to 7 hours (set aside 10 hours or more if you want to three-star every kitchen). Add Arcade and Versus modes, which let you jump into a small handful of kitchens for some quick fun, and online play, and you’ve got yourself a pretty hearty meal for only 25 bucks.

This review was based on a PS4 copy of Overcooked 2 provided by publisher Team17. You can purchase the game for PlayStation 4, Xbox One or Nintendo Switch via Amazon. 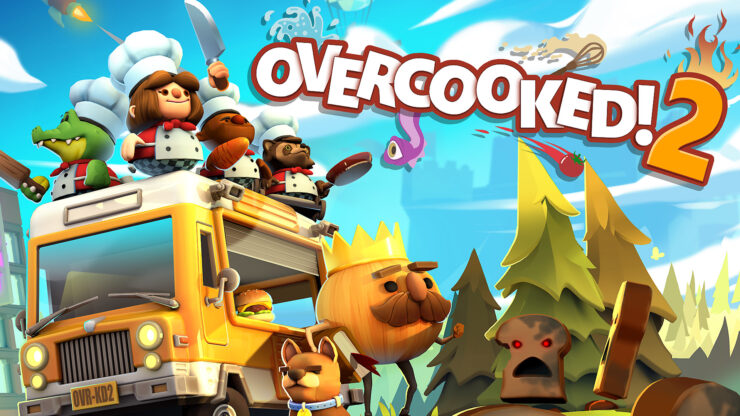 Overcooked 2 mostly sticks to a winning recipe. The clarity and simplicity of the first game has been muddled a bit – some of the new recipes and kitchens are a touch too complex for their own good – but the addition of online play makes up for a lot. If you’re new to this series, I suggest you check out the near-perfect original Overcooked to start, but if you’re an existing fan hungry for more, Overcooked 2 is a tasty second helping.