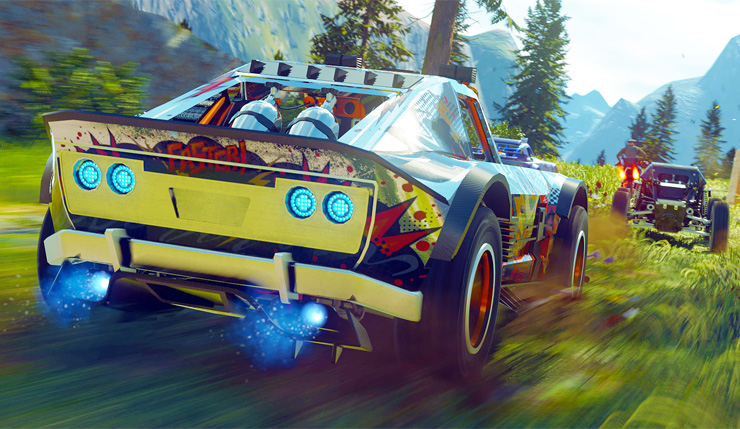 Buckle up arcade racing fans, because Codemasters has just released a hot new trailer for their over-the-top off-road racer, Onrush. Get ready for huge jumps, awesome tricks, crazy crashes, and, of course, plenty of mud! Check it out below.

For those who haven’t been keeping up, Onrush is being made by many of the folks who developed Sony’s fan-favorite MotorStorm games. Here’s Codemasters’ official rundown:

“Arcade racing is BACK! Onrush rewrites the rules of racing, throwing players into a competition where fun is just as important as the fight for first. Onrush is a contact sport. Racers will have to put everything on the line when chasing the win with daring takedowns, team maneuvers and wild stunts.

Wreck opponents by unleashing your RUSH! Rush is the ultimate manifestation of speed and strength – an intense and unstoppable power that promises your best thrills and takedowns. Rush is a huge shot of adrenaline to your game, whether you’re on the rampage or protecting your team-mates and it’s a hit you’ll crave again and again.”

Sounds like my kind of racer! Onrush may not be the prettiest driving game ever, but the game’s sense of speed and intensity is impressive (Codemasters has made clear the new trailer is all in-game footage taken from actual races). The game boasts eight different car classes -- Blade, Outlaw, Vortex, Charger, Interceptor, Dynamo, Titan and Enforcer – each of which will offer its own strengths and abilities. The game will also have a full livery editor, allowing you to customize your off-road beasts as you see fit.

Onrush races on Xbox One and PS4 on June 5, with a PC version set to arrive sometime later. You’ll be able to get an early taste of Onrush in May, hen Codemasters plans to hold an open beta.

What do you think? Excited for the return of ridiculous MotorStorm-style action? I certainly am!