If you have been paying close attention to our coverage of OnePlus 2, you will know that in addition to featuring 4 GB of LPDDR4 RAM, the smartphone will also be sporting a sub-$450 price, V2.1 of Snapdragon 810, and a Type-C USB port. Now, OnePlus CEO Liu Zuohu has detailed yet another feature that will make you forget all about OnePlus One, and focus your attention on OnePlus 2. The handset will feature dual-SIM compatibility, which is very handy for those who are tired of carrying around two devices at the same time just to accommodate two numbers.

OnePlus 2 will officially be unveiled on July 28, but before that, we will try to cover each and every aspect of the smartphone in order to make sure if it is worth your hard earned cash or not. Liu Zuohu had posted an image from his official Weibo account where there is an illustration of two SIM cards. This is sufficient evidence to prove that OnePlus 2 will be sporting two SIM card slots.

However, as much having two functional numbers in a single handset is thoroughly convenient, so is having expandable storage. Currently, there is no evidence that OnePlus 2 is going to feature a MicroSD slot, or if one of the SIM card slots can be converted in to a MicroSD card slot for expandable storage purposes. For smartphones possessing ‘top of the line’ hardware specifications, it becomes an insult to consumers who spend exorbitant amounts of money on expensive smartphones and not get an option for a MicroSD slot. 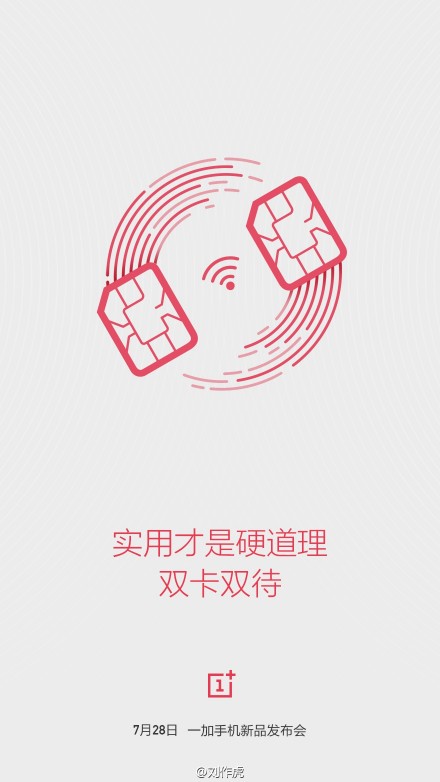 Since this piece of the puzzle is currently taking a stroll in limbo, looks like we are going to have to wait for July 28 to arrive in order to get to know if OnePlus 2 is going to possess it. Stay tuned for more details.